A82: Road to Highland Titles 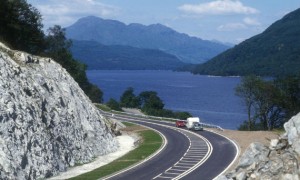 A82 and Loch Lomond

It is the best and worst of roads, to paraphrase Dickens. The A82 has been slated and praised, and both highly. Tight bends and occasional landslips give much beard-stroking consternation, but driving enthusiasts love it. The dramatic and diverse scenery makes this a road filled with spectacular highlights.

It begins in the bustling streets of Glasgow’s city centre. You’ll find the A82 off the M8 at Junction 17 and enter the heart of the city. Soon you find yourself in a rather salubrious end of Glasgow with neo-classical architecture and tree-lined avenues. It crosses the stately Victorian iron bridge that spans the river Kelvin. You pass by wholefood shops, vintage boutiques, designer Italian restaurants, and on the right at a corner, an old blue police box. Sadly, Doctor Who is not at home.

The Botanical Gardens on the right, with yards of Victorian iron railings framing the greenery is reminiscent of Kew. But the Kibble Palace glasshouse is fantastically unlike any at Kew. It’s a glass flying saucer about to take exotic specimens back to its home planet. 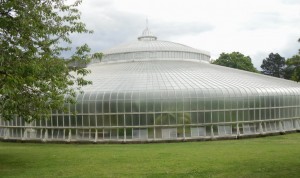 You leave the city centre behind, and cruise along an avenue of suburban houses, mansion flats, out of town supermarkets; and into the hub of Anniesland, a Glasgow satellite. By the railway bridge a preserved cinema façade still stands, built in curvaceous white-tile-effect thirties architecture. Behind the façade the cinema has been developed cleverly into apartments. 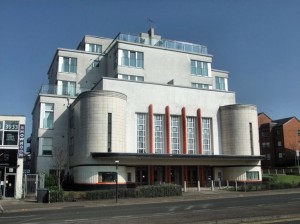 Over the Forth & Clyde Canal and you’re passing the housing estates of Clydebank. Now and then you catch glimpses of the Clyde through the trees. You see a sign: Campbeltown 122 miles. Campbeltown is a tiny town at the farthest reach of a very long pennisula. To get there you’d have to turn left at the top of Loch Lomond, join the A83 and double back on yourself all the way south until you’re more or less level with a spot 40 miles south of Glasgow across the firth of Clyde. But you’re not going there. You’re heading for Crianlarich, 33 miles up ahead. Population: 185.

A group of tall pines reach skyward beside your first glimpse of Loch Lomond. The reflective tranquillity of the water quietens the mind. As you head due north, the morning sun illuminates the western mountains in warm purple and brown tones. But these are foothills compared to what’s ahead. Sheep chew quietly in the fields. The city is left behind. Loch Lomond is 24 miles long south to north, and the A82 follows it all the way like a greyhound at heel.

At Ardlui Hotel, at the northern end, you might stop to contemplate the Loch. Moored boats rock in the lapping water as it reflects the remote purple peaks in wavy zig-zags. You pass through Crianlarich, a smattering of holiday accommodation surrounded by snowy peaks. It has a train station, part of the famous West Highland line which tags along with the road. The road winds and turns through bosomy peaks, and you press on to the award-winning Real Food Café in the next village of Tyndrum. Alan Brown of the Sunday Times once called it ‘God’s chip shop’. It’s a popular spot, where walkers come down off the West Highland Way and fill their stomachs.

After Tyndrum the road forks and you take the right fork into a forested landscape of fir trees. Now you are at the northern corner of the Trossachs National Park. A sign says Glencoe: 30 miles. Beyond the forest and almost directly ahead you can see the symmetrical conical peak of Beinn Dorain, like a child’s idea of a mountain. It ascends to 1076 metres. Craggy peaks, valleys and fir trees dominate this landscape and the road is bending and swerving with the contours. The mountains are bleak and bare of vegetation. Now you follow a winding river called Allt Kinglass. A Norwegian derivative if ever there was one. The stream wavers and plays footsie with the road until it crosses under and joins the larger river Orchy, and soon you reach ‘Bridge of Orchy’ (another station on the West Highland Line) with a quaint turreted hotel, and, yes, you guessed it – a bridge. 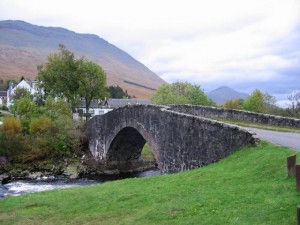 Beyond the bridge the river Orchy is your only companion on a lonely stretch. Heathery moorland leads you onwards to Loch Tulla where bottle-green firs guard the banks. The loch gets free of the trees and stretches out flat and blue. Distant white peaks frame the water. A solitary buzzard circles overhead. Glasgow is an age away from here.

You’re on higher ground now. The land undulates. A sign says ‘welcome to the highlands’. Up here it’s remote and watery with lochans and rivers and assorted large puddles. Rivers and tributaries run across the landscape like veins. The peaks get pointier and more imperious. Here and there the odd house, but not much in the way of human occupation.

The mountains rise steeply on either side of the road, draped in ever changing sun and shadow, mottled, velvety mountains; a sudden gushing waterfall. The road here has been cut through steep rocky sides, bends are treacherous, but the views along the valley of Glencoe are beyond words. Rivulets glisten in the folds of sheer crags, a winding river valley blushes beneath moving clouds. Only the gurgling of water breaks the silence. 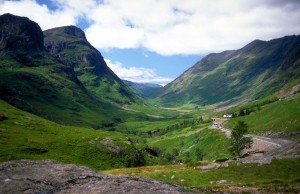 The valley widens and the road straightens as you approach Glencoe village. Hikers in small groups trudge along the side of the road. Loch Leven opens out before you, a watery canvas where mountains and sky are painted. Sailing boats, one or three, drift about their anchors against green and purple hills. Behind them hides the big daddy of them all, Ben Nevis. On your left a collection of friendly white painted cottages and guesthouses stare out across the loch.

Ballachulish up ahead is a working village with a church, an assortment of cottages, a graveyard with a jumble of ancient headstones and a view to die for. At a roundabout you are finally getting off the A82, and taking the second exit onto the A828, staying close by the Loch. Up ahead you can see Ballachulish Bridge, which links north and south Ballachulish at ‘The narrows’ where Loch Leven kisses Loch Linnhe.

The road takes you under the Ballachulish bridge. If you’d stayed on the A82 you would be driving over it now and heading north up to Fort William under the shadow of Ben Nevis. Instead you are heading south on the A828. The banks of Loch Leven have widened into the vast expanse of Loch Linnhe, a sea loch.

You pass the Ballachulish Hotel perched on the edge of the land, an elegant establishment which provides meals to non-residents, divine view no extra charge. You drive under Beinn a Bheithir, the mountain that was once home to a legendary dragon who terrorised the neighbourhood.

Through the gentle village of Kentallen, and on through Duror, with church and school and village post office-cum-general store. Here the Loch has receded behind the trees, but you’ll soon meet it again, and there on your left, a dirt track, a gate and a sign: Glencoe Wood: Highland Titles Nature Reserve.

You’d better park up and meet Stewart at the welcome cabin. There’s a plot of land to find!