Friday (12 August) marks the official beginning of grouse hunting season in the UK. As many of you may know, we are not big fans of the “sport” and have been promoting banning driven grouse shooting as per the petition here. We’d love for you to help us achieve our goal of banning this cruel and out of date activity and encourage you to sign.

As we’ve done in the past, we like to share profiles of the animals and species we help to conserve in our nature reserves, but, as the occasion calls for it, this time we’d like to put the spotlight on an animal we are hoping to protect all over the UK – the Red Grouse. 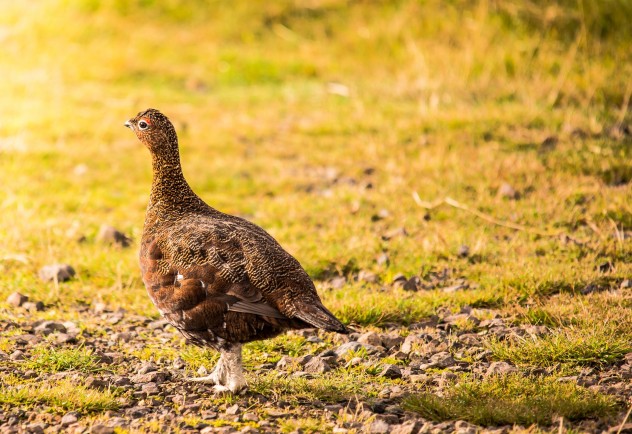 The Red Grouse, a medium sized member of the willow grouse family, can be found in various moorland areas of Scotland, Northern England and Ireland. There is also an introduced population in Dartmoor, which were brought in by the Victorians for sport back in the late 1800s.

They consume a very heather-heavy diet, which is why they make their homes on the moorlands around the UK. They will also eat berries, the occasional insect, and various cereal crops.

They differ from other members of the grouse family by having a reddish brown plumage with a black tail and white legs. The males have prominent dark red areas above their eyes (called wattles) which distinguish them from females whose are generally lighter. They are also considered to have a quite distinctive call which some say sounds a bit like they are shouting go-back-go-back-go-back-go-back!

Current estimations of population of the Red Grouse are approximately 250,000 pairs. Research into the species over the years has shown long-term declines in the Red Grouse population, and much speculation has been put on the activities of sport shooting throughout the moorlands during “grouse season” from the 12 August (also know as the ‘Glorious Twelfth’) to 10 December every year. This, combined with a slow deterioration of their habitat, an increase in predators such as foxes and crows in these areas, and diseases like Strongylosis (worm) and viruses carried in ticks have led to this population drop.

5 Facts about the Red Grouse

Now that you’ve learned a bit more about these somewhat controversial birds, we encourage you to sign and share the petition to ban driven grouse shooting in the UK and put an end to the unnatural treatment the Red Grouse experience year after year.