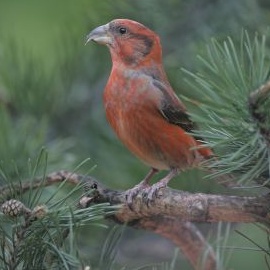 The Scottish forest is home to some spectacular species of bird, not least the Scottish crossbill, the only bird which is unique to the British Isles. It isn’t native to any other country in the Northern hemisphere, and neither is it prone to migration. Being a very sensible bird, it likes its native Scotland and doesn’t want to roam.

Depressingly, but not surprisingly, their numbers have been falling in recent years. But efforts are being made to increase their presence by making more habitats available to them. They are most at home in Scots pine forests, surviving on pine cone seeds from both the Scots pine and the larch. Their unusual crossed-over beak mandibles which give rise to their name apparently evolved to help them effectively wrench the seeds out of the cones. 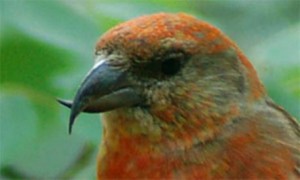 It is classed as a threatened species and an action plan has been drawn up to protect it by regenerating the Scottish native pine forests on which it survives. The future looks bright despite this current dip in numbers because regeneration work is already underway throughout Scotland by the Trees for Life Campaign, which we are proud to support. Find out more here http://www.treesforlife.org.uk/companies/highland-titles.html

Males are orangey red or brick-coloured while females are yellowish green. As you can see in the photo below, courtesy of Trees for Life, both colourations provide camouflage. The male blends in with the branch behind him while the female could easily be mistaken for a mossy clump! 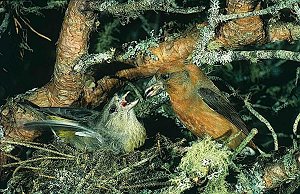 Our Ghillie, Johnny, has sighted some Scottish Crossbills in the Highland Titles Nature Reserve which is very encouraging. The existing larch trees will already provide some nourishment for them.
They can be seen hanging upside down and doing other balletic moves in order to prise the pine cones off trees. Soon we will be introducing Scots pine saplings to replace the non-native Sikta spruce, and this will help to increase their numbers even more.