Driven grouse shooting is a field “sport” peculiar to the United Kingdom. Red grouse breed naturally on upland moors and lines of “beaters” drive the birds towards “guns” who wait with shotguns to kill them as they fly overhead. A shooting party usually includes 8–10 guns who stand in a line in the butts (hides for shooting, spaced some 25 yards apart and screened by a low wall to minimise their profile) to shoot the grouse in flight. The grouse shooting season extends from 12 August, often called the “Glorious Twelfth”, to 10 December each year.

Whilst this is clearly all bad news for grouse, it is other aspects of the “sport” which have attracted the ire of Highland Titles and other conservation bodies. In addition to the annual scattering of 6,000 tons of lead over Scottish uplands and massive public subsidies (In 2011 the editor of the Daily Mail pocketed £250,000 in subsidies for his estate near Ullapool) the environment is damaged by heather burning and predator control by estate gamekeepers. 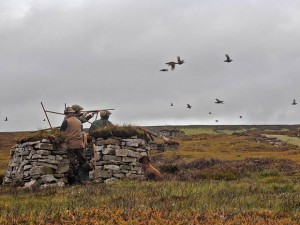 Most heather moorland in Scotland is a mixture of bog and heath habitats, and are frequently a pioneer stage on the way to naturally regenerating into a stable climax community such as Scots Pinewood. Such forests were the norm across most of Scotland before they were destroyed by man in centuries past. Heather moorland supports a limited range of species. But woodland is not useful for driven grouse shooting and so the heather moorland is ruthlessly maintained by periodically setting fire to the heather,

Burning on moorlands is widely used to increase the numbers of red grouse that are available for recreational shooting.  As patches are burned, fresh shoots come through which are ideal nutrition for grouse. Burning is done in patches so that there is a variety of heather heights, on a rotation of between 8 and 12 years. While the short new shoots provide food, the taller, older heather provides cover and shelter for the grouse. 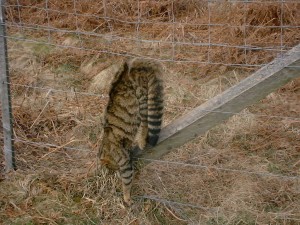 Burning heather has a large number of negative consequences on the diverse moorland environment. Burning reduces Sphagnum moss growth and the density of macroinvertebrates which play a vital role in aquatic food webs by feeding on algae, microbes and detritus at the base of food chains before they themselves are consumed by birds, fish and amphibians. Worse still, it reduces the ability of the peat to resist acid rain and inhibits plant growth. Rivers that drain burned catchments are more acidic than rivers that drain unburned catchments and have higher concentrations of silica, manganese, iron and aluminium.

Grouse moor management involves the routine legal killing of predators (vermin control) such as foxes, crows and stoats and other wildlife such as hares. To give an idea of the scale of wildlife destruction required by gamekeepers in days gone by to manage a shooting estate, Dr Mark Avery gives an often quoted example from the Highland estate of Glengarry.  In the four years between 1837 and 1840 the estate keepers killed 11 red foxes, 198 wildcats, 78 housecats, 246 pine martens, 106 polecats, 301 stoats and weasels, 67 badgers, 48 otters, 98 peregrines, 78 merlins, 462 kestrels, 475 ravens, 285 buzzards, 3 honey buzzards, 15  golden eagles, 27 sea eagles, 18 ospreys, 63 goshawks, 275 red kites, 68 hen harriers, 109 owls as well as 1,432 hooded crows and 475 ravens. Most of these species are now protected by law, but gamekeepers still kill them when they can.

photographs are from an article on the iShoot website, written by Peter Carr in April 2015 about a February trip he made to the Angus Glens to participate in a weekend of driven mountain hare shooting.

Mountain hares have been suspected of playing a part in the transmission of louping ill virus (a tick born disease) to Red Grouse. This has led many Scottish estates to slaughter thousands of mountain hares in an effort to boost grouse populations.  Although Scottish Natural Heritage have a statutory duty to maintain a healthy population of mountain hares, they routinely fail to do so and have a history of granting licenses to kill hares out of season and using indiscriminate methods.

Interestingly the destruction of hares has been shown to be of no benefit to grouse. Their persecution is meaningless.  But worse, mountain hares form an important food source for larger raptors such as the golden eagle and mammalian predators such as foxes, stoats and, most importantly, the Scottish wildcat. Thus, the extermination of mountain hares by gamekeepers helps to reduce the natural populations of predators.

In addition to the suffering caused indirectly by the persecution of mountain hares, the grouse’s natural predators are also targeted directly by gamekeepers.  These killing are illegal and always denied by gamekeepers and estate owners, except when caught red handed. As well as the illegal destruction of wildcats, gamekeepers continue to illegally destroy peregrines and hen harriers, both of whom prey on Grouse, and particularly grouse chicks.

Concerned by this damaging and inhumane slaughter the former RSPB Conservation Director Dr Mark Avery raised a Government petition in 2014 calling for a ban on the practice of driven grouse shooting. It failed to reach more than 20,000 signatures. He has now created a new petition with the support of Eduardo Gonçalves, CEO of League Against Cruel Sports, Chris Packham and Bill Oddie, and is already much more successful. Everyone we know who works for Highland Titles has signed it, but we need more concerned individuals to take the time to add their support.

Please help us to ban driven grouse shooting by signing the petition below. 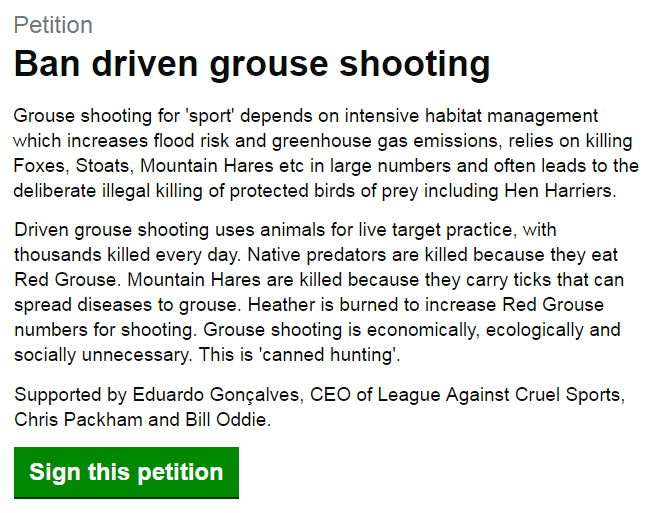 All British citizens or UK residents have the right to sign 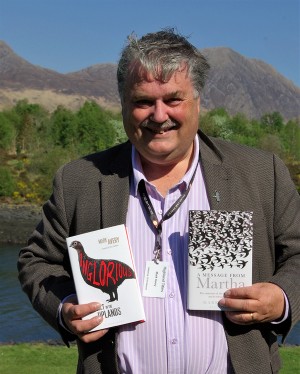