The Battle of Culloden took place in 1746 and was the final confrontation of the Jacobite rising, as well as being the last ever battle to have been fought on British soil.

In the centuries since it was fought there have been a series of compelling but somewhat misleading myths surrounding the Battle of Culloden. But what is undisputed is that on 16 April 1746, the Jacobite army of Charles Edward Stuart was decisively defeated by a British government force under William Augustus, Duke of Cumberland, on Drummossie Moor near Inverness in the Scottish Highlands.

The battle finally settled a contest for the monarchy that had lasted almost 60 years. 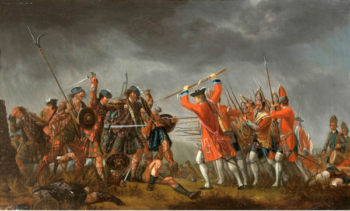 The Battle of Culloden in 1746

The Background of the Battle of Culloden

In 1688, in an act that was immediately hailed as a ‘Glorious Revolution’, Parliament and an overwhelmingly Protestant political nation deposed the Roman Catholic King James II. James’s Protestant daughters from his first marriage, Mary and Anne, reigned after him. But when Anne died in 1714 leaving no heir, Parliament replaced the Stuart dynasty with their German cousins, the Hanoverians.

Charles was the eldest son of James Stuart, the exiled Stuart claimant to the British throne. Believing there was support for a Stuart restoration in both Scotland and England, he landed in Scotland in July 1745: raising an army of Scots Jacobite supporters. During his lifetime Charles was referred to by the nicknames “the Young Pretender” and “the Young Chevalier”, but nowadays the most popular moniker he is refered to as is Bonnie Prince Charlie. You can find out more about him here.

Jacobitism was a largely 17th- and 18th-century movement that opposed the creating of  The Acts of Union in 1707 and therefore supported the restoration of the House of Stuart to the British throne. The name is derived from Jacobus, the Latin version of James.

The news that Charles Edward had landed in Scotland with a handful of followers and was gathering support amongst the highland clans was initially met with little alarm. But this changed rapidly when his highland army defeated government troops at Prestonpans in September 1745, occupied Edinburgh, and then in November entered England.

The government recalled 12,000 troops from the Continent to deal with the rising. The Jacobite invasion of England reached as far as Derby before turning back on the 5th December, having attracted relatively few English recruits, despite being a 5000 strong army at this time.

The Jacobites, received limited French military reinforcements, attempted to consolidate their control of Scotland, where by early 1746 they were opposed by a substantial government army. The highlanders defeated the first government army sent against them at Falkirk (17 January 1746). But by the time the highland army came up against the Duke of Cumberland’s forces on Culloden Moor on 16 April, it was dispirited, poorly supplied and suffering heavy desertion.

Charles Edward Stuart, also known as Bonnie Prince Charlie, the Stuart claimant to the throne of Great Britain after 1766.

Following Hawley’s defeat at Falkirk, the Duke of Cumberland arrived in Scotland to take command of the government forces. His army reached Cullen on 11 April, where it was joined by six further battalions and two cavalry regiments.

It was whilst the Duke of Cumberland’s troops were toasting to his birthday on the night of the 15th April, that the Jacobites, lead by lieutenant- general Lord George Murray, decided to try and repeat the success of Prestonpans by carrying out a night attack on the government encampment.

Murray proposed that they set off at dusk and march to Nairn. His plan was to have the right wing of the first line attack Cumberland’s rear, while the Duke of Perth with the left wing would attack the government’s front. However, the nighttime march was longer than expected and they only arrived at their destination with about an hour of daylight left, so in the end this mission was aborted.

The Battle of Culloden Moor

It was only shortly after the exhausted Jacobites arrived back at their camp after the failed night mission that a scout delivered the news of advancing government troops.

But by then many Jacobite soldiers had already dispersed in search of food or returned to Inverness, and others had fallen into an exhausted sleep in ditches and outbuildings. It is estimated that several hundred of their army may have missed the battle. 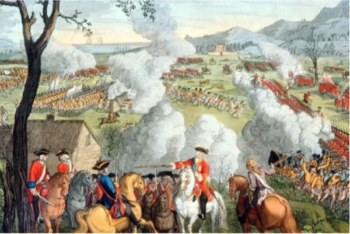 At around 10 am the Jacobites saw the government army approaching at a distance of around 4 km, and by the time they were 3 km away from the Jacobite position, the Duke Cumberland gave the order to form line, and the army marched forward in full battle order.

Over the first half-hour of the battle, Cumberland’s artillery battered the Jacobite lines, first with roundshot and then grapeshot. Finally, Charles issued the orders his Highlanders had been waiting for, to charge the enemy.

Although hampered and slowed down by the boggy ground, many of the Highlanders reached the Government lines. In the bloody hand to hand fighting that followed, the new Redcoat tactic of bayoneting the exposed side of the man to the right, rather than confronting the one directly in front appears to have paid dividends. The Highlanders finally broke and fled, the entire battle had lasted less than hour.

Around 1,000 of the Highlanders were killed by the 9,000 Redcoats, who lost only 50 men, and some 1,000 more were killed in subsequent weeks of hounding by British troops. Hunted by troops and spies, Prince Charles wandered over Scotland for five months before escaping to France and final exile. The Battle of Culloden marked the end of any serious attempt by the Jacobites to restore the Stuart dynasty to the British throne.

The Battle of Culloden is today considered one of the most significant clashes in British history, and yet there are still a lot of confusions over some of the details.

In 1881 these headstones were erected to mark the mass graves of fallen Jacobite soldiers.

A visitor centre was opened near the sight of the Battle of Culloden in 2007. The intention of opening this as a visiting site was to preserve the battlefield in a condition similar to how it was on 16 April 1746.

One noticeable difference is that it is currently covered in shrubs and heather; during the 18th century, however, the area was used as common grazing ground, mainly for tenants of the Culloden estate. Those visiting can walk the site by way of footpaths on the ground and can also enjoy a view from above on a raised platform.

You can join a guided tour of the battlefield where an expert guide will lead you around the key areas of action on Culloden Moor, as well as visiting the memorial cairn around which lie the graves of 1,500 fallen Jacobite soldiers.

History
The Scottish Kilt: A cut above the rest.. and the knee! »
History, Tourism
English & Welsh Castles: Guide to England and Wales’ Castles »