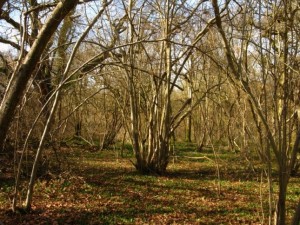 The numbers of extreme downsizers are increasing, like Nick Weston, dubbed the modern day Robinson Crusoe, who lived in a wood surviving on nothing but wild food for a year, or Phil Inkly, who fled civilisation to live in the woods because he was hyper-allergic to the urban sea of EMFs (electromagnetic fields) from Wi-fi.

Then there is Ben Law, the man made famous by TV’s Grand Designs, who built his own house in the woods, and continues to make his living from coppicing. His book, The Woodland Year, gives practical advice on how to live sustainably in a wood.

So what is coppicing? We’re glad you asked. It’s a method of cutting wood that actually makes the tree live longer. No way! Yes, very much way. It increases biodiversity, as coppiced trees let in more sunlight which encourages wildflowers, insects and, further up the food chain, birds and mammals.

After the two World Wars British woods were badly depleted, so The Forestry Commission was set up. The first thing they did for a short term solution was to plant fast-growing pine plantations using non-native varieties. Conifer trees, however, die off completely when they’re chopped down, so evergreen foresters have to continually plant new trees. But with broad-leaved trees the stump doesn’t die, it sends up vigorous new shoots which become new trunks around the ‘stool’ of the felled tree. The process of cutting causes the tree to defer its ageing process and start off again as a new tree.

Our clever ancestors knew this. They had been coppicing woodland since Neolithic times. They discovered that the different widths of trunk produced by coppicing methods could be put to many uses including house building and fence making. Broad leaved trees like oak, hazel, sweet chestnut and lime were used, in short all the old native UK trees.

With the advent of cheap coal in the 19th Century there was no money in coppicing anymore and rural workers moved to the cities. Coppiced woods grew and became ‘over stood’ and today we can detect remnants of coppicing on old broad-leaved trees. But no skill is entirely lost, and our collective need to re-discover sustainable ways of living is leading many people to re-learn coppicing. 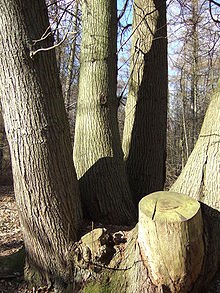 Short Rotation Coppicing (SRC) using Willow is one of the more popular methods as willow is fast growing. According to thewillowbank.com one good acre of coppiced woodland can produce about 5 tonnes of firewood a year on a 5 year rotation. People never agree on this – just take a look at the various forums. But let’s say this is a reasonable estimate. This means you divide the wood into fifths, plant willow, wait five years and then harvest one fifth (5 tonnes of wood) every winter. After five years the fifth you started with is ready to harvest again.

If you want thinner willow branches an acre can produce a larger yield. The nearer together the trees are planted the thinner the stems. For firewood one meter between each tree will encourage optimum thickness, nearer together than this and you will be making fences or baskets.

So how much wood does the average household use? That question is a string-length one but, according to thewillowbank.com again, a small sitting room stove in a well-insulated cottage might use 1-2 tonnes a year of seasoned wood, but an Aga heating a big draughty house complete with radiators and hot water tank might use as much as 10 tonnes a year. The average household will be somewhere between these figures. So if you want to make a living at coppicing beyond personal use, increase the acreage accordingly.

There are growing numbers of people buying small plots of woodland for their own needs. Burning wood is carbon neutral – what you burn in your stove releases the same carbon atoms into the atmosphere as the plant used to grow. Unlike coal or oil which takes millions of years to ‘grow’ and so when it’s burned releases all those years of carbon into the atmosphere.

Some people think, erroneously, that burning firewood is depleting our woodlands, but the truth is the more we use wood for heating the more we produce a market for sustainable woodland and the more native woodlands will thrive. It seems then that the future of sustainability lies in our older traditions.