In the Early Middle (used to be called ‘Dark’) Ages, that period of time between the departure of the Romans around 410CE and the re-emergence of civilisation, England sank into the gloom of illiteracy and barbarism and remained there for over two centuries. Its Celtic neighbours in Scotland on the other hand finally emerged into a literacy and culture that would eventually spread its wings, fly south, and give birth to a brand new England. 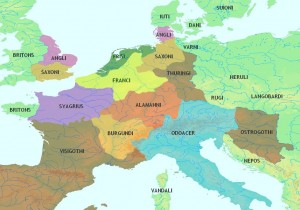 During this period, in a complete reversal of roles, Hadrian’s Wall began to be used by the Picts to protect themselves from barbarous invaders from the south. These invaders included the Saxons, Angles and Jutes who throughout the 5th Century sailed from the North German territories, overpowering the indigenous Britons, and making themselves at home. The Britons, Romanised, civilised and unfamiliar with warfare, had been abandoned by Rome. Their written pleas to the Emperor for help fell on deaf ears. Rome had its own troubles by then. By 455CE there were Vandals at their gates (who, incidentally, came from Sweden). 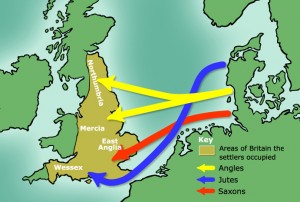 How Britain looked by around 700 CE

The Scottish word for the English: Sassenach, is actually derived from the Gaelic word meaning Saxon. The Saxons and assorted Germanic tribes were tribal, bloodthirsty and pagan. Illiteracy was the norm in ruling families so no writings or records were kept – hence the term ‘Dark ages’. Some historians maintain that the Saxons were originally peaceful settlers, but as more and more of them migrated over the North sea that all changed. The original language of the Britons died out during this period and some historians suppose that widespread genocide may have occurred. Though they were related the different Germanic tribes frequently fought with each other. It was a time of small kingdoms, a complete transformation from the largely united and developed culture of a Roman colony.

The language of the Britons was similar to Welsh, and many Welsh are descendants of ancient Britons. The remaining Britons fled or were driven back. Many of them ended up in Wales, the tip of Cornwall and Brittany in France. Some even migrated as far as the North coast of Spain. It is thought that those who remained were assimilated into the Germanic way of life over a period of several generations. 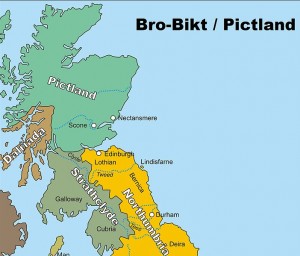 Map of the Northern territories around 800CE

While Germanic invaders conquered in the East of Briton, in the West there were other dangers. Ireland was a country the Romans had never conquered. The Irish Celts were seen as a godless bunch without laws or literacy, who ‘lived like the animals’ according to one Roman chronicler. So the Romans, believing there was little nobility in conquering Ireland, didn’t bother.

Unlike the animals, however, the Irish had sea-faring knowledge, and some of them had taken to the seas as pirates. Bands of Irish pirates used to capture unsuspecting Britons and enslave them back home. So it was that in the late 5th century, a young boy called Patrick, son of a Christian deacon called Calpurnius, lived on the coast of Strathclyde (see map above). One day he was captured and put on a ship for Ireland. He must not have been a chip off the old block, because he later wrote that his six year servitude brought him out of ignorance and back to God. This boy became known to the Irish as St Patrick, the first Celtic Christian. 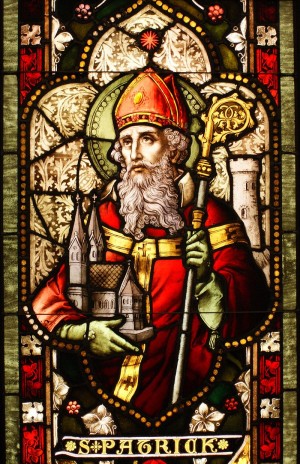 After he managed to escape back home he studied Christianity with vigour. Then he had a vision which urged him to return to the godless Irish Celts to teach them Christian ways. St Patrick was a firm believer in education for the masses. A man ahead of his time, his mission was to educate and civilise the people of Ireland. His success is legendary.

Christianity had been introduced to Britain by the Romans, and while the Anglo-Saxons were doing their best to strangle it, its escape to Ireland saved it, and along with Christianity went the literature from the old Roman civilisation. The Christian monks who followed Patrick were copying out Latin and Greek texts, as well as Christian tracts. It was in this nugget of literate Christianity that the seeds of a new civilisation arose. The Anglo-Saxon conquest of Britain could only go so far without literacy.

Though today we think of religious institutions as being rather stuffy, perhaps backward looking, in the monasteries that were springing up in Ireland new technology was being developed. They were centres of learning and culture, where techniques for writing on parchment, innovative farming methods and ways of working with stone were being developed at a rapid rate, not just new religion. What has all this to do with Scotland? We hear you cry. Well, hold that thought.

The enormous success of the Irish monasteries attracted the attention of continental European Christians. Many travelled to Ireland to seek instruction and take knowledge back to Europe with them. But the real Western powerhouse of Celtic Christianity was destined not to be in Ireland at all.

St Patrick died around the end of the 5th Century. One of his followers, a clever Irish monk called Colum Cille took a coracle of 12 monks to visit with their Irish kin over on the West coast of Scotland. Colum Cille, better known as St Colomba, had his own vision of bringing literacy, faith and new technology first to their cousins on the West coast, known as the Scotti. Later he had the same idea for the Picts who ruled the centre and east of what became Scotland. 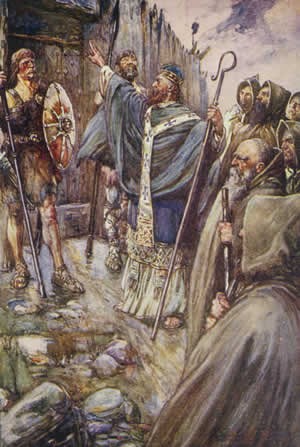 Colomba at King Bridei’s Fort by John R Skelton (King Bridei was King of the Picts.) The story goes that when Colomba asked for entrance, the king of the Picts refused him. Colomba raised his hand to heaven and the bolts drew back on the gate. The King was so impressed he immediately converted to Christianity.

It was because of St Colomba that Scotland shared in the wealth of new knowledge coming out of Ireland. He founded a monastery on Iona, which in time became the centre of a conjoined Church and State. Its power and prestige even eclipsed the Irish monasteries at the zenith of Western Christianity. 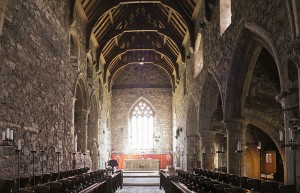 Celtic Christians: The Book of Kells

One of the most striking results of this new wealth of civilisation was the making of the Book of Kells. This enormous volume is an illuminated manuscript of the four gospels of the New Testament. The Book of Kells was designed to impress. One of the largest books in the world at the time, and one of the greatest achievements of Western art, its 340 intricate pages would have taken several years to complete.

Each page is drawn on calf-vellum. Several months would have been spent just processing around 150 calf hides for vellum. This in itself was an enormous undertaking to slaughter the animals, dry and scrape the skins and treat the vellum so it could be painted.

The colours used for the illustrations were gathered from far and wide. One particular shade of blue, ultramarine, was made using lapis lazuli, which at the time had to be sourced from the only lapis mine then in existence, deep in the wilds of Afghanistan. So the scale of organisation and networking needed for this operation was highly developed and complex. Incidentally the yellow colour used was a highly toxic pigment made from sulphides of arsenic. No doubt it would have killed several of the illustrators who worked with it. 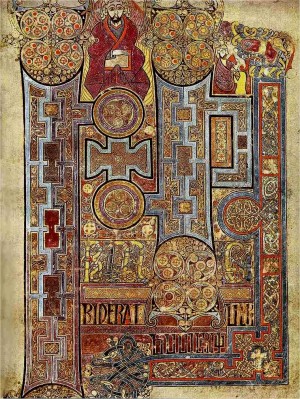 There is some argument over where the book was actually produced. It was likely to have been begun on Iona, but the Viking raids upset matters, so that monks re-located either to Kells in Ireland, or deeper into Scotland. Whatever the history, Iona’s achievements were the foundation on which the Book of Kells was made manifest. It is Iona which for a time was the supreme centre of Western Christianity and Civilisation.

By the time of Colomba’s death in 597CE Pictland was rapidly becoming part of Christianised Scotland. England, however, was still in the grip of Saxon paganism and illiteracy. As one Gaulish observer put it in, Briton had been ‘reduced to Saxon rule.’

Despite the common ancestory of the various factions of Saxon invaders, they competed for rule with each other, causing frequent warfare. Small pockets of Christianity may have survived among the Britons. Names like Eccles suggest a place where a Christian Church was still in use (derived from the Latin Ecclesia meaning ‘church’). But Woden, known in Norse mythology as Odin, was then the primary deity of Saxon Briton.

It wasn’t until the 7th Century that England began to be converted to Christianity, began to keep written records, and finally emerged out of obscurity. The Papacy in Rome had its own imperial ambitions. Around 597CE, the year of Colomba’s death, Gregory sent Augustine as a missionary to Britain to try to convert the Saxons. Augustine of Canterbury, as he became known, was Canterbury’s first Archbishop. The Saxons, however, were obstinate and resistant, and as the 8th century historian, Bede described in his annals, the Roman mission unravelled. After twenty years the mission had only succeeded in converting Kent.

Meanwhile, in Northumbria, a large kingdom that then spread from the River Humber all the way to Edinburgh, a young King, Oswald, had returned to rule his kingdom. He had been forced into 18 years of exile at the age of 12, and spent many of these years on Iona, where he had been taught to read and write and converted to Christianity. Upon his return to Northumbria, he was determined to convert his people and after some trials, a young monk was sent from Iona to help. This monk’s name was Aidan. 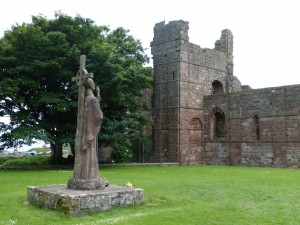 St Aidan founded Lindisfarne, a home from home. Similar to Iona, but more accessible at the end of a causeway, and beautifully bashed by the North Sea winds as Iona is bashed by the Atlantic winds. Perfect for a monk with ascetic leanings! With King Oswald’s protection Aidan brought his own brand of gentle Christianity. He maintained that the people needed to be soothed by the words of Christ, not battered over the head with them. Along with literacy, techniques for building in stone, and other technologies brought from Iona, Aidan and his monks began to transform the North of England. Hexham Abbey was built at this time using recycled stone from old Roman ruins. The Saxons had lacked the technology to build in stone.

Historians maintain that the success of the Celtic Christians was the most important occurrence of first millennium Britain. It brought Britain out of the so-called dark ages, and it is the Celtic Scottish we have to thank for it. In the end Britain did succumb to Papal authority, while Iona’s supremacy and the influence of the Celtic Christians faded. But while Celtic Christianity flowered in Britain it brought with it the seeds of civilisation. What did the Celts do for us? Well, to borrow the words of Tennyson, they began ‘to make mild a rugged people.’ 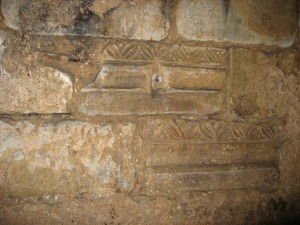 The 7th Century Crypt at Hexham Abbey shows how the early Anglo-Saxon Christians used recycled Roman stone. This wall clearly shows some pieces of Roman cornicing depicting an olive leaf pattern, probably mined from a local abandoned villa, which have been re-employed to build the crypt using stone building methods taught by the Celtic monks.