The Claymore – The Notorious Blade of Scotland

The Claymore- The Blade of Scotland

The claymore is perhaps one of the most recognisable blades from history. It was a unique weapon found solely among the clansmen of the Scottish Highlands. Developed in the early Renaissance, the claymore was created during a dynamic transition in military armament. Claymore is a term derived from the Gaelic ‘claidheamohmor’, meaning “great sword.”

Swordsmanship was greatly affected by the evolution of military technology; as a result, several new sword designs were developed in an attempt to adapt the weapon for modern combat. In some areas, such as Germany and Switzerland, swordsmiths began to fashion longer blades; these “greatswords” required the use of both hands to be used effectively. Sometimes known as the Blade of Scotland, this weapon was a fine example of these two-handed swords. 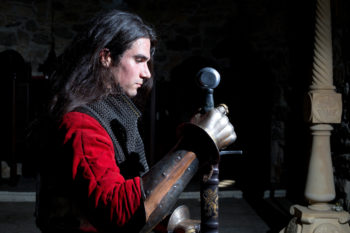 On average, the claymore had a forty-two inch blade and thirteen inch grip, making the total length of the weapon fifty-five inches. Due to its mass, the claymore weighed over five pounds; to carry the abnormally large blade, Scottish clansmen would often use a shoulder sheath to carry their claymores on their backs. The hilt of the sword had a downswept guard, with the prongs of the crossguard pointing towards the blade. Furthermore, some hilts contained two concave plates for additional protection; this became known as the “clamshell hilt” due to its resemblance of an open clam.

Since the sword was so huge, the swordsman needed no shield which gave the impression and symbol of pride and strength.

In contrast to the smaller swords of the Renaissance, the claymore sacrificed speed in favor of power and reach; this is because the claymore was intended to combat specific weapons. The claymore’s preferred opponents were weapons of long distance, such as pole arms or other greatswords.

Smaller swords had a definite advantage in dexterity against spears and pikes, but lacked the ability to penetrate the defense of the longer ranged weapons. On the other hand, due to the Claymore’s size it had immense cutting power and gave the wielder an advantage of distance. In battle, this combination made it a devastating weapon in the close quarters of hand to hand combat; a highlander armed with one could easily hack through an enemy formation.

For example, in 1689, the Scottish clans loyal to King James VII fought the government troops of King William of Orange at Battle of Killiecrankie. After being harassed by musket fire, the highlanders charged into close combat with their claymores. The battle ended in a pyrrhic victory for the Scottish, but the prowess of this weapon was demonstrated in gory detail. Witnesses of the carnage gave gruesome depictions of the smashed and decapitated bodies that littered the battlefield.

However, after Battle of Killiecrankie the notorious blade of Scotland never again was able to demonstrate its ability. The musket had become dominant on the battlefield, and outclassed in the age of gunpowder, swordsmanship became obsolete. However, although the sword no longer played a pivotal role in military tactics, the claymore remained as a symbol of Scottish pride.

If you would also like to own a symbolic piece of Scotland and display your Scottish pride, consider getting a Scottish souvenir plot with Highland Titles and becoming a lord, laird or lady. 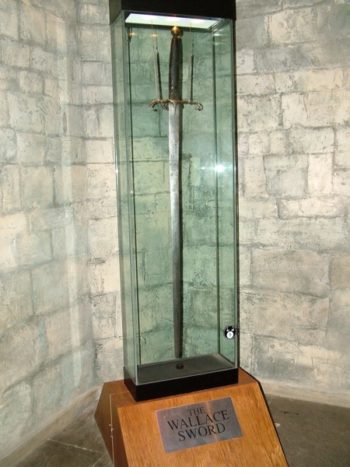 This is the type of sword that was said to have been used by William Wallace, the legendary Scottish warlord, who was portrayed by Mel Gibson in the 1995 movie, Braveheart. But although Wallace did use a similar large sword, his was a bit different from the blades we normally think of when we hear the term claymore.

The actual sword used by Wallace, which is on display in Stirling, Scotland, has no leather-wrapped ricassa and has a blade that angles to a more acute point. It is entirely possible that Wallace used a standard Claymore during his years of battle, but the sword that is regarded as his primary weapon is not the kind most people think of.

History, Tourism
The Links Between Scotland and France »
History, Uncategorised
Gaelic Names of the Caledonian Forest »