Scotland is at its best on a cycling adventure. Thousands of cyclists who have completed the Land’s End to John O’Groats (LEJOG) ride, would testify to that. Whether it’s a week-long self-guided cycle tour, a day of guided mountain biking, or a weekend of family fun, there is a host of sights and wildlife to enjoy.  By bike, you can take in the views at your own pace, letting all abilities and ages join in. Winding country roads lead you to stunning picnic spots, and way marked off-road trails head through the Scenic Scottish countryside letting you choose your own adventure. 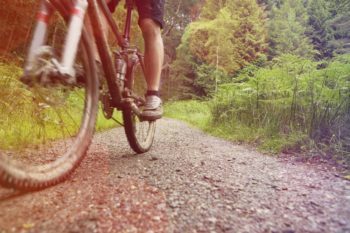 Contrary to popular belief, there is no ‘official’ route from Land’s End to John o’Groats. Rather, there are a number of routes which vary from website to website. The most direct route is approximately 1200 miles long, others are roughly 200 miles longer than using A- and B-roads but they will be more varied and enjoyable. Sustrans have recently published their own guide to the iconic Land’s End to John O’Groats endurance ride, which we recommend you read.

But you don’t need to go all the way to John O’Groats to enjoy cycling in Scotland.  A wide network of routes will take you between towns and cities allowing stops to visit unique tourist attractions or a farmers’ market along the way. You can even take your bike on the train for free with ScotRail which expands your options for trips further afield. If you are travelling as a family group, Scotland’s traffic-free routes will appeal. These routes include the West Loch Lomond cycle path, the Bowling to Falkirk Wheel route, and the ESK Valley Clydeway. Many peaceful routes can found in the rolling countryside of Dumfries and Galloway, the region Kirkpatrick Macmillan invented the pedal bicycle.

Island hopping by bicycle is fun and easy to do. Most of the countries’ extensive network of ferries allows you to take your bike on for free. Try a leisurely circuit of the Isle of Cumbrae, the flat terrain on the whisky island of Islay or a challenging ride around Arran’s varied terrain.  If you have more time, there are 21 long-distance routes in Scotland. The Lochs and Glens North Trail transverses two national parks, covering over 250 miles from Glasgow to Inverness.  Another popular option is the 55 miles Four Abbeys’ Cycle Route that combines scenic cycling with historical interest.  Take the sweat out of a multi-day cycling trip by booking a luggage transfer company, to take bags ahead to your overnight destination. Scotland is one of the world’s top destinations for mountain bikers. With easy greens to challenging blacks, there is something on offer something for all riders. Head to 7stanes Glentress for the widest range of routes at one location. Laggan Wolftrax and Staffordshire Forest also have an excellent range, with green beginners trails, thrills at the bike park and adrenaline packed red and black routes. Glasgow’s new Cathkin Braes routes were developed for the 2014 Commonwealth Games and are within easy reach of the city.  Scotland’s outdoor access code allows riders to explore off track.  So long as you act responsibly, cyclists have the freedom to roam thousands of miles of stunning single-track routes. With all this variety situated in a unique and culturally rich area, experiencing Scotland by bike is an incredible adventure.