Red and Roe deer are regularly sighted here at Highland Titles Nature Reserve. But would you be able to tell the difference if you stumbled across one?

Roe deer are becoming ever more populous in Scotland as in the rest of the UK. Many of us now find ourselves hosting a small bevy of roe in our winter gardens, especially if those gardens are lucky enough to give onto wooded copses and fields. There is rarely anything more magical than seeing one of these beautiful animals tiptoe onto your lawn when it thinks it isn’t being watched. 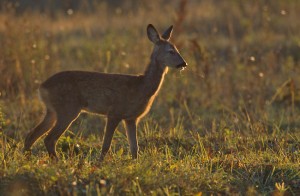 After a snowfall people have reported seeing roe deer sitting in the middle of their snow covered lawns, feet tucked beneath them, like brown swans floating on a frozen lake. We are not sure why they do this. Perhaps our readers can tell us. One suggestion is that they are melting the snow with their bodies to get to the grass beneath.

The Roe deer became utterly extinct in England by 1800 after over-hunting and forest clearance. But populations remained in small pockets of Scotland. The Victorians took it upon themselves to re-introduce them into the wild in England, and since then, because of increasing forestry protection in the late 20th century, the roe deer population has increased to such an extent they now heavily impact on woodland eco-systems, and can be a problem for farmers, eating young shoots in the fields.

Their natural predators (excepting humans) were bears, lynx and wolves, all of which are now extinct in Britain. The plan to re-introduce wolves into the wilds of Highland Scotland is in part a response to growing deer numbers. Today Britain has more wild deer than at any time since the last ice age, with numbers thought to be approaching two million. Efforts are made at humane culling. The UK Forestry Commission now have wildlife rangers who manage their populations.

Roe deer don’t live in herds like their red cousins, but occasionally they can be seen in small family groups like this one. 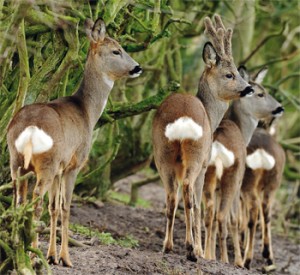 The collective term for a group of roe deer is a ‘bevy’. And no they are not wearing fake moustaches!

One identifying feature of roe deer is the snow white patches on their rumps. The female also has a fluffy bit of tail called a ‘tush’. The rump becomes enlarged to a round disc when they are excited or anxious.

Unlike the great antlers of the red stag, the roe buck’s antlers are short, about 30cm long at best. While they are growing they have a furry covering called a velvet, as shown in the photo above. They grow vertically from the head and usually have three prongs at the end.

Just like foxes, these animals are increasingly becoming urbanised. Urban roe deer are a feature of Glasgow where they like to live in the cemeteries. Notably they have been seen on and off in the famous Glasgow Necropolis. They are dicing with death there. In 2006 after their presence in the Necropolis was televised; their raised profile meant they were shot by some kids with air rifles. If they do return to Glasgow Necropolis more caution is required. 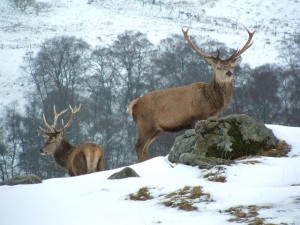 The red deer are much bigger than the roe. Their antlers grow wider apart and look much more impressive, though not as big as the American Elk. Red males develop neck manes in the autumn as the weather turns colder, and their coats grow thicker. Their winter coat is grey-brown with a creamy-coloured rump patch. It’s the reddish-brown summer coats which gave rise to their name.

Red deer herds live mainly on open moorland, though this is adapted behaviour. In the past they lived in the forests, and those that still have woodland at their disposal tend to be healthier and bigger than their moorland friends. The hinds and the stags live in separate herds most of the year, but the stags will start living closer to the hinds in autumn, the rutting season, when they bellow and roar, and start sizing up other males for competition.

The stags will fight only as a last resort, when bellowing hasn’t worked. Obviously weaker stags won’t start a fight unless they think they can win. The hinds (females) pretend not to notice while this is going on. It’s a lot like your average high school!

Red deer have always existed in Scotland though numbers took a dip in former centuries, but like the roe they have been on the increase throughout the 20th century. There are thought to be around 300,000 of these stunning creatures in Scotland today. The sight of any kind of deer always casts a special spell. They are elegant and dignified creatures. 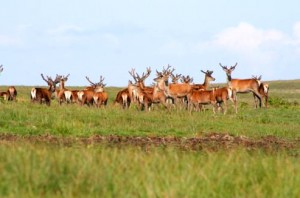 Herd of red deer in their summer coats

The British Deer Society has a wealth of extra information.