The National Trust has delighted conservationists all over the UK by ending the Grouse Shooting lease on the Peak District National Park.

The image below was posted by Raptor Persecution UK in April.  They (and anyone else who can see!) stated their belief that it showed an armed, camouflaged man lying in wait near a decoy hen harrier, presumably hoping to entice some raptors down within shooting range. 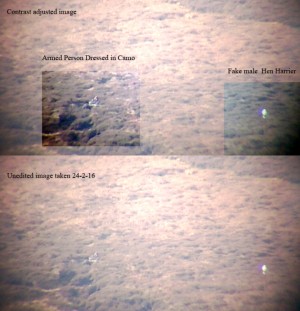 Consequently, the Raptor Persecution group encouraged its readers to contact the National Trust with their concerns, as did Mark Avery who spoke at our Gathering in May.

And now, the National Trust have just issued the following public statement:
The National Trust has today given notice that the current shooting leases at Hope Woodlands and Park Hall in Derbyshire will end in April 2018.
The charity said it had taken the decision to exercise a break clause in the lease to end the relationship four years early.
Andy Beer, National Trust’s Director for the Midlands, said: “We have a clear vision for land management and wildlife restoration on the High Peak Moors, which was developed in full consultation with our tenants and other key stakeholders.
All our tenants have signed up to deliver to the vision and understand their responsibilities. We work very closely with our tenants and support, consult and discuss any issues relating to the plan on a regular basis.
However, in this case we have decided, after a meeting with the tenant, that we should revoke the lease four years early as it became clear that we could no longer have confidence that they were committed to the delivery of our vision for the land.
We have given the tenant 22 months’ notice and will start the process of looking for a replacement in 2017, when we will be happy to receive applications from partners who can demonstrate how moorland management and shooting can deliver great nature conservation in a way that is compatible with public access.
We remain committed to the High Peak Moors Vision. As with all our conservation aims, we review and evaluate progress periodically. When considering renewals of individual shooting leases in future we will take into careful account the extent to which our objectives have been met, in particular relating to increasing raptor populations.”
Jon Stewart, General Manager, Peak District National Trust

This decision could be seen as a game-changer for the publicly subsidised Driven Grouse Shooting industry, who have literally got away with murder for far too long.