Flora of the Scots pine forest – The Blaeberry 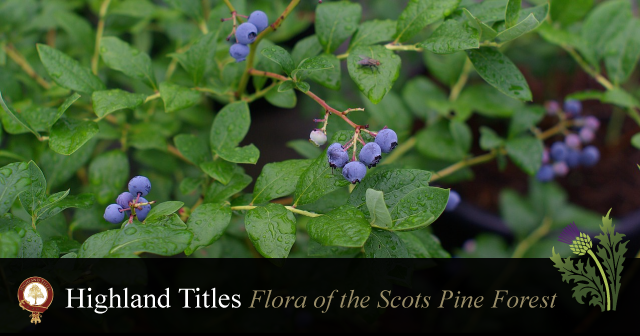 This time of year our volunteers come across a little blue berry in the nature reserve, known to Scots as the blaeberry, a sweet and tasty fruit. They try to refrain from picking them however, as they are a valuable food source for more vulnerable creatures. Closely related to the Cowberry, the blaeberry is also known as bilberry – if you’re English, or whortleberry – if you read Roald Dahl stories! It’s the European version of the American Blueberry from which it differs as a species (and don’t let anyone tell you otherwise), but is still part of the same genus. It grows best under the tree canopy and loves to colonise the hummocks of the forest floor.

The Blaeberry is deciduous, with the leaves turning all shades from yellow to red in autumn. It grows 2 to 3 feet in height and the leaves are small, oval and light green in summer with tiny serrations around the edges. Its flowers are bell-like and pinkish white, similar to the Cowberry, but later forming into dark blue berries.

Blaeberry fruits are softer and juicier than their Blueberry cousins, and don’t work well as a commercial crop because of their fragility. But the forest animals love them! The flowers are pollinated by bees, wasps and many other insects, providing those insects with a food source, who in turn become a food source for birds. Like the Pine trees they can also form a mycorrhizal relationship with some fungi. This means the fungi which grow on the Blaeberry provide the bush with essential ammonia they make out of nitrogen, while the bush feeds photosynthesized sugar to the fungi, so the benefit is mutual.

Many birds feed off the berries, especially the thrush family, and the leaves are highly nutritious to the red grouse, black grouse and the rare capercaillie, who relies mainly on the Blaeberry as a major food source and is only to be found in Scottish pine forests. Capercaillies eat the leaves of the bush in summer and its stems and shoots in winter. The immense variety of insects that visit the Blaeberry provide essential food for newly hatched capercaillie chicks who shelter beneath its bushy cover.

The berries were once taken as a remedy for diarrhoea. Useful to know!