Hadrian and the Lost Legion 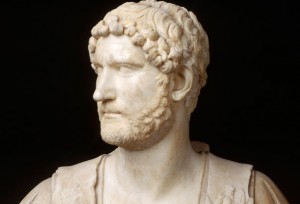 In AD117 Emperor Hadrian assumed his leadership of the vast Roman Empire. In the same year a Roman legion marched out of the northern gate of Eboracum (York) heading for the wildwood and mists of Caledonia.

Something had to be done. The Romans were sustaining heavy casualties from the constant raids, and Britain looked increasingly like a breakaway state that could defy Roman control. The Caledonian tribes, a particularly vicious lot, helped the northern Britons with military aid and succour. The tangled thick pine forests were great for the rebels, but impossible for the Romans to penetrate. These blue-faced savages were making the Roman army look ridiculous. Think of the US army against the Viet Cong in the 60s and you’ll get the general idea.

Legio IX Hispana (The Ninth Spanish Legion) had been stationed in York since they rebuilt the fort there in 108. When they marched north in 117 it was the last recorded manoeuvre they ever made. After going into Scotland they disappeared from the historical records. We know this because when a list of all Roman legions was compiled in 165AD the Legio IX Hispana wasn’t on it. Were they ambushed and massacred by the Picts? 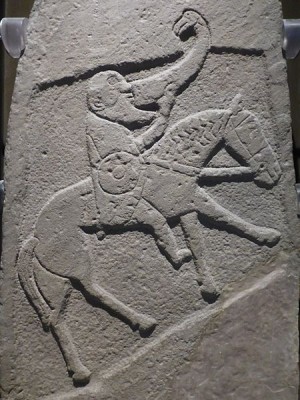 Historians have been fascinated by the mystery of the disappearing Ninth Legion. Some say they sustained heavy casualties but survived to be re-stationed, and then got themselves wiped out by the Parthians (now called Iranians). Others maintain they never made it out of the forests of Caledonia. Whatever occurred between 117 and 122 was bad enough to bring the Emperor Hadrian himself to Britain’s shores, bringing with him an extra legion, ‘to correct many faults’, as the Roman record says.

Let’s not rush to blame the Ninth Legion for these so called ‘faults’. They adopted the name ‘Hispana’ because of their many accomplishments in a long war against the Cantabrians (Spanish). Coming to Britain was an unlucky break. The Romans struggled against Boudica and her Welsh army long before they had to face the Caledonians. Britain was their nemesis. According to the historian Miles Russell the most plausible reason for their disappearance was that those poor legionnaires ended their lives on Scottish soil, and that Hadrian sailed to Britain in response to a military catastrophe.

As we all know it was Hadrian who ordered the wall to be built, a military undertaking which separated once and for all the Caledonian tribes from the northern Britons. It was built partly to keep the Caledonians out, but also to stop the rebellious northern Britons from eliciting their support or running north to hide in that impenetrable forest. 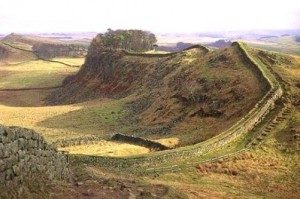 Stretching a distance of 73 miles coast to coast, it had to be built on valuable arable soil. This was so bands of brigands could be spied more easily on open ground well before they managed to attack any part of the wall. Milecastles were built at every mile, and two turrets were placed between each milecastle. So every third of a mile of wall was manned, and every inch of the wall could be watched by patrols.

A milecastle sometimes guarded a gateway through the wall and was manned by a garrison of 20 to 30 soldiers. A turret would also be manned by a despatch from the nearest garrison. In total there were 80 milecastles and 158 turrets along Hadrian’s wall, a sizeable military presence which had the desired effect. The British didn’t get shot of the Romans for another 3 centuries. Clever old Hadrian. 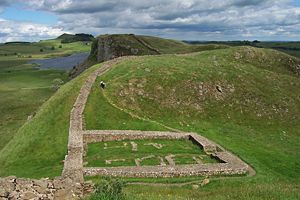 Hadrian’s wall (incidentally a great day out – see link) was a massive feat of military engineering at which the Romans excelled, and it took them somewhere between 4 and 7 years to complete. If the wall hadn’t been built things might have been very different. The Britons and the Caledonians would have stayed much closer and the cultural divide that grew up in the years following the building of the wall might not have occurred. So you could say the Romans are ultimately to blame for the division of the kingdom. What did the Romans ever do for us? They gave us Scotland.