In honour of Hen Harrier Highlands Day, which took place on Sunday, 7 August, 2016, we’d like to highlight a rather well known predator of the UK moorlands and another unfortunate victim of driven grouse shooting, the Hen Harrier. These once common birds of prey bred in various areas across the UK but have, in recent years, found their numbers in steady decline. Estate and land management in relation to the driven grouse sport has contributed to this deterioration of the species in the UK, as it’s been reported that some gamekeepers have illegally baited and killed the predators that they believe will pose a threat to the grouse population on their estates.

By sharing more information about the animals this “sport” affects, we hope that more people will understand just how much harm is being done. Work can still be done to save these creatures and the more awareness we can bring, the better. Please remember to sign our petition to ban driven grouse shooting so we can work together to save the Hen Harrier from extinction. 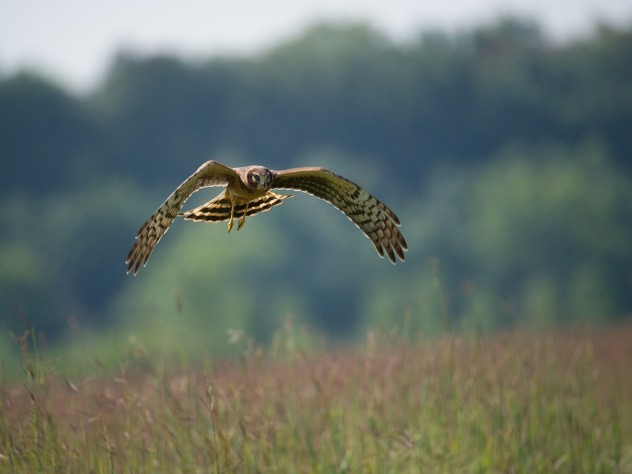 Hen Harriers rely predominantly on voles and other small rodents and fowl. In areas where they co-exist, they will prey on the chicks of grouse, lapwing and curlew.

The Hen Harrier is a medium sized bird of prey with prominent physical differences between the males and females. The males are considered more visually appealing with an eye-catching bluish grey plumage with black tipped wings and white undersides. The females, who tend to be larger, have a lighter brown plumage, banded tail and noticeably white bottom. Hen Harrier young take on the female characteristics until they begin to develop their adult plumage after approximately a year. Male Hen Harriers begin to then grow the distinguishable paler feathers. They have almost owl-like features, with a dish shaped face which allows them to be able to recognise and identify prey in a similar fashion as the other birds of prey.

As we mentioned earlier, populations of Hen Harriers have dropped drastically due to land management practices and persecution over the years to the extent that it is now a Red Listed Bird of Conservation Concern in the UK. While other circumstances such as climate change, habitat change and predators assist in contributing to the decline of these birds, illegal persecution has been one of the main causes, specifically on land managed for driven grouse shooting. Because the predators feed on the grouse chicks, by removing a major predator, the numbers of grouse can grow and flourish and will provide more targets when the season kicks off on August 12, (Glorious Twelfth).

Though there are moorland management practices that can increase numbers of Hen Harriers, it appears that the illegal actions are still occurring. Recent reports have found only 3 breeding attempts this year in England. None of these attempts are on grouse moors and it’s still too early to tell whether or not they are successful. Populations are higher in Scotland, though, and in a bid to conserve the birds, satellite tagging is being carried out on chicks found at a Ministry of Defense base in Argyll. Once this has been done, they can monitor the birds and track their progress in hopes of better understanding how they can be better protected.

5 Facts about the Hen Harrier

Did any of you have the opportunity to attend the first annual Hen Harrier Highland Day on Sunday? We’d love to hear about your experiences with these majestic predators. Remember to share and help us raise awareness and draw attention to the illegal persecution of Hen Harriers. Support the ban on driven grouse shooting and sign the petition today!