Heritage Trees of The Trossachs

Of the two National Parks in Scotland, the Trossachs is smaller and more Southerly (The Cairngorms in the Highlands is the other), but that makes it no less beautiful. If you are travelling north towards Highland Titles Nature Reserve on the A82, you pass through the Trossachs National Park and along the side of Loch Lomond, so we consider it one of our neighbours. 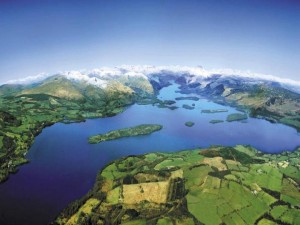 Loch Lomond and The Trossachs

When the Forestry Commission began the nationwide hunt for Scotland’s Heritage Trees, a list of especially old or otherwise significant trees in the landscape, many were found to be in the Trossachs. We’d like to tell you about two of them.

Near Loch Lomond there is a sycamore tree that’s been eating scrap metal. It grew up in an old smithy among a large heap of metal discarded by the blacksmith. As it grew its widening trunk devoured a ship’s anchor and a chain, among other bits and pieces. Most famously it ate a bicycle frame, that’s why the locals have named it “The Bicycle Tree.” 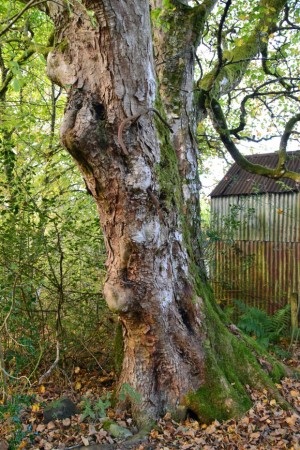 So famous has it become that it was voted to be included on the Heritage Trees list. This list has been growing and now contains some 130 trees. At a hundred years old this humble sycamore may not be the longest lived, but it has secured a long future with its ingenious claim to fame. The sycamore is a non-native but naturalised tree in Scotland and the British Isles. Actually a species of Maple, Acer pseudoplatanus, it became naturalised around the 17th Century, after being introduced from Europe.

In some parts of the world the Scyamore Maple is dismissed as an invasive weed. Whatever you might feel about the species, the Bicycle Tree is still a Scottish national treasure.

This next Heritage tree has an even stranger history. On the top of Doon Hill, near the picturesque village of Aberfoyle, a tall Scots pine stands alone amid a grove of oaks. This is called the Minister’s Tree by the locals, though others have named it the Fairy Tree. It depends on your belief system. Some say the pine holds the trapped soul of a Scottish 17th century minister, one Reverend Robert Kirk.

The Minister’s Tree or Fairy Tree

Robert Kirk used to take his constitutional walks up Doon Hill which stood close to his parish church in Aberfoyle. He became very interested in the fairy folk who allegedly inhabited the hill, and interviewed locals about their experiences of them. The local name for these people was the ‘Sith’, but they would also be called by pacifying names – the little people, the good neighbours, or the friends – by those who feared their power.

Kirk saw that the parishioners were afraid of these beings. Those blessed, or cursed, with ‘second sight’ saw them moving en mass along the roads on quarter days (the four days of the solstices and equinoxes) and Kirk noted ruefully that his church services were especially full on those days with locals hiding from the roaming Sith! He put all his findings in a book entitled The Secret Commonwealth of Elves, Fauns and Fairies, a book which still exists today though it was written in 1691. In the end it wasn’t printed until the 19th century, but several editions have been published since, the last one in 2006. 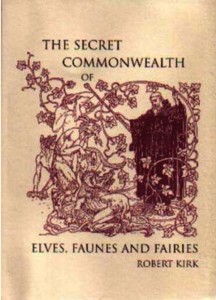 It probably wouldn’t have gone down too well with the bishop, not being compliant with Christian sensibilities. Kirk’s gravestone has no mention of this tract, only that he was a vicar and an eminent Hibernian scholar. More recently the church has conceded to public pressure, and a small plaque has been positioned on a wall of the local graveyard at Aberfoyle, indicating to folklore tourists that the ‘fairy minister’ is buried within. 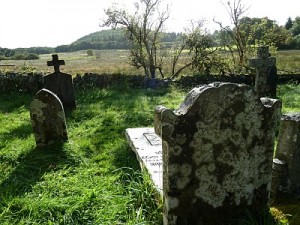 The story of his death is the hardest to fathom. Robert Kirk died suddenly and mysteriously on Doon Hill in May 1692, a year after he finished the manuscript. His body was apparently found near the fairy tree. Maybe the fairy folk were not best pleased at having their affairs recorded.

People who visit the tree write their wishes on pieces of cloth and tie them to the trees around the Scot’s Pine. They believe that the fairies will read them and grant their wishes, assuming of course that fairies can read English. 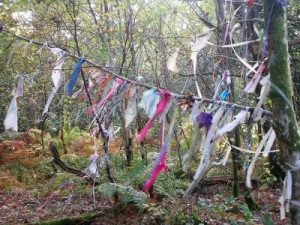