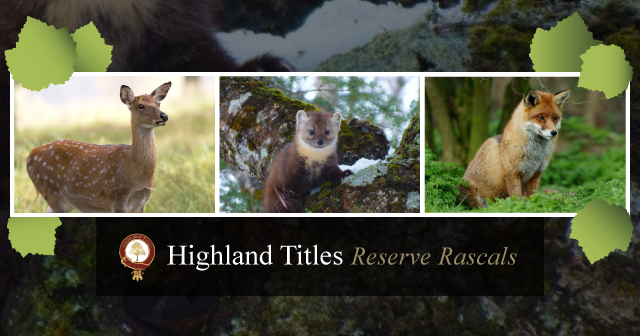 Glencoe Wood is a haven and comfortable habitat for a good number of plants and wildlife. Most notably the Nature Reserve is home to red deer, roe deer, badgers and the mischievous pine marten.

Back in 2013 we decided to create a three-acre lochan in order to attract more bird life, and our tree planting scheme means that we’re welcoming more and more species of wildlife to the reserve each year. Our infra-red motion-sensitive cameras capture glimpses of our native wildlife on a daily basis; seeing their healthy, happy faces makes us more and more determined to provide an ideal environment for as many animals as possible.

To celebrate the vast number of species living on the reserve we thought it’d be nice for you to learn more about them by doing a regular feature on them, starting first with the pine marten. 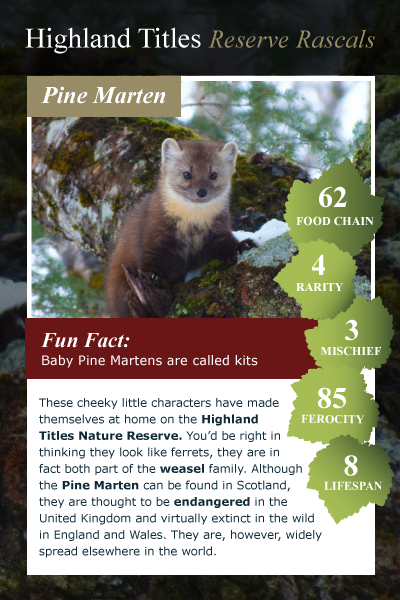 Download the image here (or right-click and save image)

Please note that we’ve picked these numbers based on how the pine martens behave on the Highland Titles estate. For example, our pine martens seem to be very mischievous on the estate but we can’t speak for the rest of the population!

These chocolate and yellow balls of fluff are nimble like squirrels and are known as tree-climbing predators. This allows them to hunt efficiently and so are high up in the food chain of animals on the estate. They are usually quite elusive, so to get a glimpse of them is a real privilege and a rare occurrence, especially after the species was nearly wiped out in the 19th century. The spread of commercial forestry eventually helped them to recover their numbers and they have learnt to adapt to modern environments and have no problems living in close proximity to humans, often making a home for themselves in lofts.

The easiest way to detect if a pine marten is living on your land is by their droppings. Known as scats, their droppings are narrower than fox droppings and thicker than cats’. The contents of their droppings can also vary drastically depending on the time of year: they’re often made up entirely of rowan berries in autumn. They might look cute and cuddly in photographs, but male adults are often larger than the average domestic cat.

Pine Martens on the Highland Titles Nature Reserve are known for their cheeky attitude, brought to light by this particular incident:

As well as this, pine martens are also very territorial animals and can be ferocious towards their own kind; no male pine martens will live within thirty-or-so kilometers of each other. Therefore sightings of more than one pine marten at a time is very rare.

Sightings of Pine Martens on the Highland Titles Nature Reserve

The elusive pine marten isn’t the easiest creature to capture, but lucky for us our motion-sensitive cameras have picked up a few sightings. Here is one of our favourites:

For more videos of the pine martens and other animals living on the Highland Titles Nature Reserve check our our Facebook page. Watch out for more in our Reserve Rascals series.