Lord Strathcona: a man of perseverance

In May of this year we celebrated our very popular Highland Titles Homecoming event. (Just click on ‘Homecoming’ in the ‘About Us’ section for details about how to get involved in next year’s event). This year’s exciting weekend of activities was centered around the prestigious Glencoe House, built by Lord Strathcona at the turn of the last century.

Today’s blog post is about Glencoe House and the extraordinary story of its founder, Donald Alexander Smith. 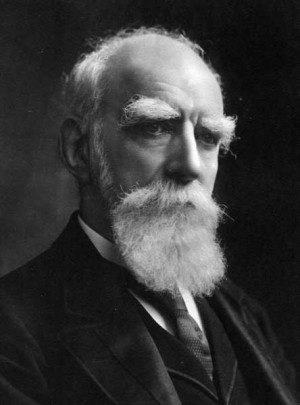 It was November 1885. A morning mist enveloped the mountain pines. Down in the valley, the cold sound of metal striking metal pierced the air and echoed away. Men cheered. Lord Strathcona, financier and builder, had driven the last spike into the Canadian Pacific Railroad.

This vast Victorian enterprise, years in the making, finally linked the Canadian provinces coast to coast. A journey that once took two weeks would now take two and a half days, and one nation was born. 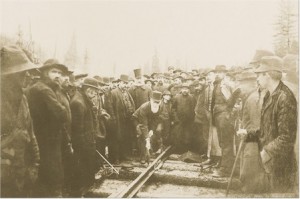 Lord Strathcona represented the railroad company that morning at the peak of his career, but as a young man of seventeen he was just a lowly junior clerk in Scotland, the son of a saddler, and bored by his choice of employment. Two of his uncles had gone to work for the Hudson Bay Company which operated in a wilderness called Canada, trading western goods with natives in return for beaver furs and other goods for the European market.

Young Donald wanted their adventurous life, and in 1838 he undertook the 44-day journey by ship. His first job, counting muskrat skins in Montreal, was short-lived. Re-posted to Tadoussac on the Gulf of St Lawrence to continue his apprenticeship, he experienced his first Canadian winter, colder than anything he had ever known.

After five years George Simpson, the Company’s Governor, considered Donald confident enough to take charge of a larger trading post. Donald worked diligently, but by the winter of 1846 he was feeling low. His efforts to impress an exacting George Simpson were thwarted by bad luck, and a deepening sense of isolation was compounded by news (received several months after the event) that his father had died. Sinking into depression he decided to resign.

But Simpson recognised in Donald a superior talent for strategic thinking. He refused to let him go and after a hearty pep talk posted him to Esquimaux Bay in Labrador, a remote trading post which needed tactical management. Simpson thought, correctly, that it would be the making of him, not least the journey itself. Donald set off in January, the depths of winter, with another apprentice, James Grant, expecting to arrive at Esquimaux bay in March. Delayed by snow storms, ill health and what Donald referred to as extremely boisterous weather they eventually arrived in July! 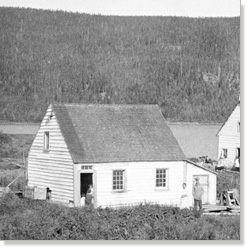 While settling into Labrador Donald befriended the daughters of a senior colleague, among them the beautiful and witty Isabella Sophia Hardisty; but James Grant worked quickly on Sophia’s affections and married her in 1851 after a short engagement. Meanwhile Donald prospered and rose to be chief trader in the district. 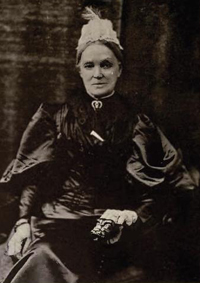 In order to improve employees’ health Donald experimented with growing vegetables. The variety of fresh produce he managed to grow in that changeable climate was the stuff of legend. He said of his time there that he never felt lonely, he got to know everyone, from the oldest white trader to the youngest Indian hunter, and even their dogs. His work for the company was inspired, and he brought in profits beyond what was thought possible.

In the meantime Isabella’s marriage went awry and scandalously she separated from her husband. Donald and Isabella kept each other company, and their love grew until she became his wife in all but paperwork, even bearing him a daughter. Simpson assured Donald that because of the remote location (there were no religious officials), her marriage to Grant was not a legal contract. So Donald and Bella were officially married in Labrador in 1859, where Donald, who was by that time Justice of the Peace, performed his own ceremony! This satisfied the governor, and the gossips, and it proved to be a happy marriage.

Donald’s achievements at Labrador were so impressive he eventually became Governor of HBC by 1883. His reputation preceded him as the most influential man in the company, which was why in 1869 the Canadian government hired him as a commissioner to pacify the Red River Resistance, a 16-year struggle for land rights by settlers in Manitoba. Donald, with customary tact, facilitated a lasting agreement. This drew him into politics, and he became High Commissioner for Canada, eventually earning the title of Lord Strathcona.

In 1894, at the age of 75, Donald finally returned to Scotland. Over the years he had invested his earnings with vision (in projects like the railroad) and was now a wealthy man. Purchasing a piece of Glencoe he commissioned Scottish architect, Rowand Anderson, to design a House. 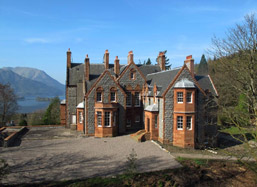 Glencoe House was his legacy and his love token to Isabella. Donald, among his many philanthropic activities, was a champion of women’s higher education, and he adored Bella for her strong minded intelligence. Over some of the windows the initials of Isabella (ISS) and Donald (DAS) are inscribed separately into the woodwork, in recognition of Bella as her own woman.

In the plasterwork ceilings are symbols of their joint heritage: Canadian maple leaves (Isabella was partly of Canadian descent), Scottish thistles, English roses, oak leaves and fleur-de-lis. Over the main doorway is Donald’s crest – a beaver gnawing at the base of a maple tree with ‘Perseverance’ written beneath. Donald chose this motto because, as he once wrote:
“There is no secret – the recipe for success is known to and is within the reach of all, it is – perseverance.” 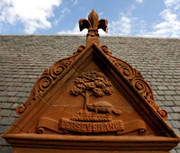 Nature Reserve, News from the estate
Update from the Reserve – July 2019 »
General, History, Uncategorised
Gone With the Windmills: the story of South Uist »