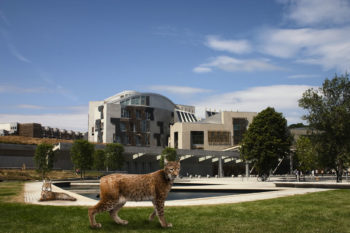 Is the lynx coming back to Scotland?

The plans to reintroduce Lynx to the UK are well underway, thanks to Lynx UK Trust.

The trust recently submitted plans for a trial reintroduction in Kielder Forest, Northumberland, but have also been in contact with landowners in Argyll and Inverness-shire.

The lynx project, headed by Dr Paul O’Donoghue, enjoys strong public support and an area of 10,000 sq miles has been identified for the pilot scheme. The Trust believes this area could accommodate up to 250 lynx. The area identified stretches from Loch Lomond and the Trossachs into the West Highlands.

Most recently, the Lynx UK Trust received a massive boost when Lloyds of London agreed to insure every pet, sheep and human in the UK in the event of an attack by a lynx.

The Eurasian lynx is a solitary cat which hunts in the dark. There are no reported incidents anywhere of a lynx attacking a human, and in actual fact these cats actively avoid humans.

The lynx It is the third largest predator in Europe, behind the brown bear and the wolf, and whilst it mainly feeds on deer and mountains hares, it has been known to prey on moose. It is found in new fewer than 46 countries throughout Europe, Asia and the Middle East

Experts believe the lynx became extinct in the UK around 1300 years ago as a result of hunting and intensive farming processes which brought about a loss of habitat.

The Eurasian lynx has a relatively short body, with long legs and large feet which allow it to tread snow incredibly well. It has very distinctive triangular ears, hooked claws and a short tail with a black tip. Its coat is spotted with long, light fur.