Rhododendron ponticum was first introduced into British botanical gardens and grand estates 250 years ago.  It makes excellent cover for game birds but is otherwise of little value in the ecosystems which it now dominates. The shrub has spread out of control with huge damage to many native woodlands, heaths and other wild places. The plant now covers 98,700 hectares, roughly 3.3 per cent of Britain’s total woodland, a report by the Forestry Commission found, and it is particularly successful in Scotland, where it covers 53,000 hectares.  Our nature reserve at Duror suffers from a broad belt growing alongside the main Oban to Fort William road that forms our western boundary.

Rhododendron grows into huge bushes that blocks out sunlight and smothers most other wild plants and trees, stopping them from growing or regenerating. Its leaves are toxic to animals and repels wildlife from earthworms to birds. Many bushes have become infected with the highly pernicious tree disease called ramorum disease that threatens many types of trees and shrubs. Outbreaks of the disease in the UK, especially on larch trees, have often been linked to Rhododendron ponticum and in the USA the disease affects oak trees, leading to its name of sudden oak death.

Each rhododendron plant can produce one million or more tiny seeds each year that spread in the wind, and it also spreads with massive tangles of branches rooting in the ground. The plant is incredibly difficult to get rid of by digging up or using herbicides. Eradication is expensive and time-consuming,  taking years to completely eradicate. Highland Titles have followed an annual volunteer led attack on our Rhododendron, but they remain a major problem and a potential source of ramorum disease. 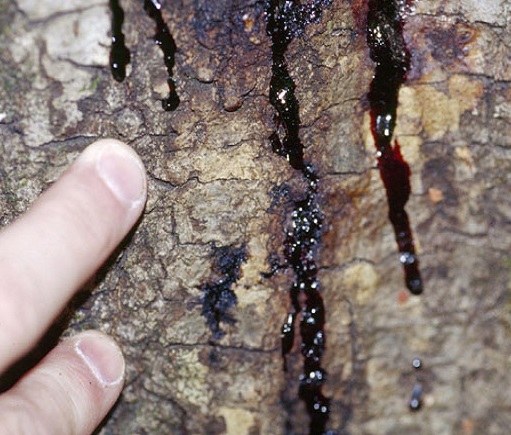 Phytophthora ramorum is the plant pathogen that causes ramorum disease, a disease which leads to the ultimate death of the plants it infects. It was first identified in the USA in the 1990s where it caused widespread damage in California and where it earned the name ‘sudden oak death’.  The Phytophthora are named from a Greek root meaning ‘plant destroyer’.

It took ten years to reach the UK, thanks to the rampant and largely uncontrolled international trade in plants.  By 2009 it was first found inhad escaped into the wild, being seen on Bilberry plants in Staffordshire and then later that same year in Japanese larch in Cornwall.   In 2010 it was found in Wales.

Phytophthora is a water mould. Once it is established in a plant host  it spreads by the subsequent production of spores. Two types of spore may be produced on the host’s leaves – one involved in dispersal and directly infecting new plants and another that can persist and survive in the environment for some considerable time until conditions are favourable. The water moulds need damp conditions to spread successfully and so it is well suited to the climate in the west of Britain. It can be dispersed by rain splash, wind-driven rain and in ground water as well as being spread through contaminated plant material and soil on tools, boots and vehicles.

Phytophthora is one of the Oomycetes, also known as water molds They form a large group of terrestrial and aquatic eukaryotic organisms and have sometimes been described as fungi. However they are now placed in a different clade altogether, the SAR supergroup (Stramenopiles-Alveolates-Rhizarians), also known as the Harosa.

Morphologically Phytophthora is very similar to the true fungi but its evolutionary history is distinct. In contrast to the fungi, the SAR clade more closely resembles plants than animals. Whereas fungal cell walls are made primarily of chitin, Phytophthora cell walls are constructed mostly of cellulose. Ploidy levels are different between these two groups; Phytophthora species have diploid (paired) chromosomes in the vegetative (growing, nonreproductive) stage of life, whereas fungi are almost always haploid in this stage. Biochemical pathways also differ, notably the lysine synthesis path which is highly conserved.

The main host species that are relevant to woodland infections are:

Rhododendron. Ramorum disease blights young shoots, twigs, leaves and leaf tips. When viewed from a distance, The plants may appear wilted. The brown-black discolouring can form a characteristic and distinctive dagger pattern that spreads from the petiole and leaf tips may also be affected.

Broadleaved trees. Broadleaved trees that we are most susceptible are beech and sweet chestnut. It can affect just the bark (as in beech), just the leaves (as in ash) or the bark, leaves and shoots together. Typically, bark infections appear as large brown-black cankers on the lower portion of the trunk that seep dark-red sap. To date British oaks have resisted infection.

Conifers.  So far in Britain Ramorum disease has only affected larch. Symptoms include: needle infection, shoot dieback and cankers on the branches and trunk. Infected shoot tips wither and wilt and infected needles appear blackened.

Bilberry (Vaccinium myrtillus). Where this is affected there are necrotic brown stem lesions, occasionally seen as bands on the stem. Leaves can also be affected – black lesions may extend from petiole into leaf.

On our reserve we have no bilberry in the understory, or beech or sweet chestnut trees. However we have several thousand larch and a number of ancient and precious oaks and a recent inspection has found some infected Rhodedendron. I will blog later about how we have tackled the problem

Conservation, General
Scottish Fold Cat: Cute but Controversial since 1961 »
Nature Reserve, News from the estate
Update from the Reserve – December 2020 »