On the question of re-wilding, Neiztche said only humans suffer from ‘the malady of history’. By that he meant only we (as far as we know) have the knowledge of what went before, the need to compare the past with the present and (ecologically speaking) to find the present wanting.

So it is, detractors would say, with those who want to re-wild the landscape. Re-wilding campaigners want to re-introduce sometimes controversial species previously extinct in the UK, especially larger mammals. People like Paul Lister, the MFI heir, who is attempting to fill his Scottish estate with, among other creatures, wild bear and wolves, much to the discombobulation of locals. But who are we to say what should be native and what should be eternally banned? That’s an easy question: we are the ones who got rid of them all in the first place. 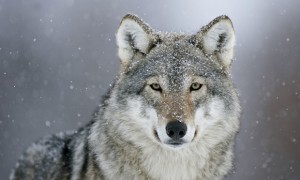 The Grey Wolf. The last one was killed in Scotland in 1621.

When the foundations of Trafalgar Square were laid in the 19th century, builders found deep below London the ancient bones of elephant, rhinoceros, hyena and even lions. They are thought to have roamed Britain until around 10,000 years ago. As the oceans rose and severed Britain from the continent, British large mammals  remained forever un-replenished by migrations from the East. Those already here were finished off by hunters.

In Britain we have become, in the words of eco-journalist George Monbiot, zoophobic. In Europe they still have large mammals roaming wild, always have had them, and don’t give a monkeys. Monbiot says the fact that the British make such a fuss today about a few wild boar in the woods is acutely embarrassing in the face of French indifference to their million strong wild boar population, Italian nonchalance towards wild bears in their Alpine region, or the European’s collective ‘meh’ to wolves, which roam everywhere from the Russian Steppes to Spain. 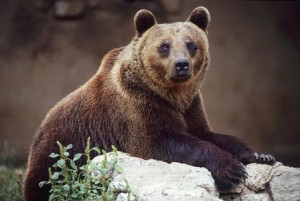 In Britain someone sees a large unidentified cat on the moors and there is wide spread panic. Re-wilding campaigners are basically saying: get a grip – there are lion bones under Trafalgar Square for goodness sake!

If you wanted to dip your toe into the scary waters of re-wilding you could do worse than start with a smaller, less ferocious variety of mammal, the very useful beaver. But even this is controversial. In Scotland and England Beaver died out sometime in the 18th century, after humans hunted them to extinction for their meat, fur and castoreum, a secretion used in perfume and cosmetics. Even in Europe a hundred years ago beavers had reached a dire population of about 1200. But thanks to conservationists European beavers now number about 300,000. 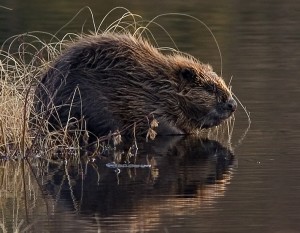 Beavers are known as a Keystone Species. The presence of beaver in the landscape enables the survival of many other species including water voles, frogs, varieties of fish and freshwater shrimp, as well as the larvae and insects that amphibians feed on. Beavers drag logs into the rivers to make their dams and these provide a safe harbour for smaller creatures. Beaver dams also act as water filters keeping the rivers cleaner. In parts of America streams on which beavers live support up to 75 times as many waterbirds as those without. This all sounds wonderfully compelling. So why has there been such a delay in re-introducing them to Britain?

Ask the Angling Trust. For a long time they had successfully lobbied the government to block beaver re-population, complaining that the rivers were more or less exactly as they liked them and beavers would only mess it up. That wasn’t exactly what they said. They said that because man-made structures already caused blockages to fish in certain river systems, the last thing they needed was the added burden of beaver dams. But their argument falls apart in the light of scientific evidence that beaver dams do more good than harm to fish ecology. The Tweed Foundation, a charity that supports Scottish angling, begs to disagree.

In the case of the River Otter beavers the government almost got rid of them due to lobbying by the Angling Trust until Friends of the Earth championed the public outcry. DEFRA (Department for Environment, Food and Rural Affairs) was quoted as saying:

“Beavers have not been an established part of our wildlife for the last 500 years and their presence could have a negative impact on the surrounding environment and wildlife. These animals may also carry a disease which could pose a risk to human health.” (DEFRA spokesperson, 2014)

The disease they refer to is known as alveolar echinococcosis. It infects a number of small mammals, very infrequently humans, and is not present in Britain. There are, however, plenty of European beaver which do not carry this disease and it is an easy matter to test any wild beaver using a sample of faeces.

Our own Scottish Knapdale beavers are from Norwegian beaver stock which is known to be disease-free.

The argument that we shouldn’t have beaver because we haven’t had them for 500 years seems to be indicative of British government attitudes to nature. The government has been trying to pass an alarming new law which reclassifies any extinct species as non-native and therefore subject to culling or extermination. The bill has its second reading on 8th December, having been passed back from the House of Lords who have seen nothing amiss.

Having tamed the UK landscape to an empty imitation of what it once was, re-wilding proponents say we have lost the sustaining elements of our ecosystem and now we can only watch helpless at its slow but inevitable collapse. They argue the lack of key species like beaver and apex species like wolves only contributes to this decline.

The biodiversity of the UK is declining at an alarming rate. In 1994, the UK Biodiversity Action Plan was introduced by DEFRA to conserve biodiversity in the UK. In 2014 the State of Nature report showed alarming rates of decline in biodiversity: 60% of all UK species in decline, 10% under threat of extinction. If you read the action plan and then the report you will be forgiven for thinking that nothing has been achieved after 20 years and millions of pounds spent. In the last 12 years for example 72% of the UK’s butterfly species have all but disappeared. But there are small pockets of hope, thanks to the efforts of conservation groups. 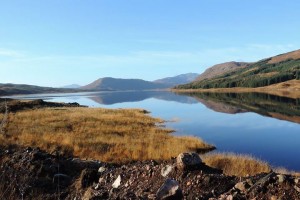 Here at Highland Titles we are busy doing our bit for the conservation effort. Building lochans, planting trees and welcoming pigs and bees has taken all our attention this last year, and so far we haven’t turned our attention to beaver, let alone bears or wolves! Please do leave comments and suggestions at the bottom of this post. We would love to hear opinions from our Lairds, Lords and Ladies about the possibility of reintroducing beavers in our lochans.