Home➤ News & Events➤ Blog➤ Scots Baronial Architecture: how to spot it
BECOME A LORD OR A LADY NOW

Scots Baronial Architecture: how to spot it

Some of the most astounding 16th and later 19th century Castles in Scotland were built in a style that became known as Scots Baronial. This decorative, fantastical, sometimes downright wacky architecture was influenced by the French Renaissance and strongly recalls some of the fairytale European castles which also inspired Disney. 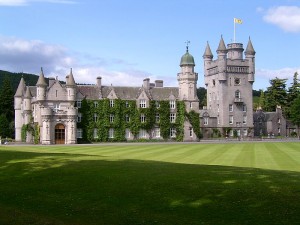 Balmoral Castle, photo by Stuart Yeates.
Finished in 1856, Balmoral is a fine example of the revival of Scots Baronial in the 19th century, which was based on earlier 16th Century architecture. Note the crenulations (uniform notches in the top of walls for shooting imaginary arrows), lancet windows (narrow and arched) and bartizans (small protruding turrets supported by corbelling). The style of the central keep tower is influenced by 16th Century castles such as Craigeivar (see below)

Dunrobin Castle, seat of the Chief of Clan Sutherland, with its round towers and gothic spires, is another 19th Century revivalist example. 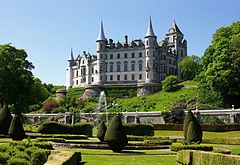 Cinderella Castle in Disneyland is a Gothic confection which shares many of the same elements. Note the gothic spires, round towers, lancet windows and bartizans supported from beneath by decorative corbelling. 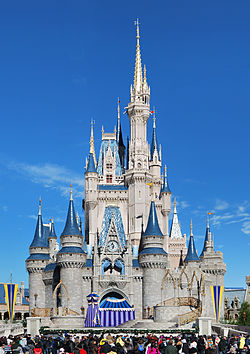 Scots Baronial first emerged around 1560. It was born out of the style of earlier medieval castles and towers, and the influence of French masons that came over to work on Royal palaces at the time. During this period the Scottish and French royal houses were closely connected as Scotland enjoyed the ‘auld alliance’, a defensive strategy against the English, who were often invading one or other of them, and sometimes both at once!

It was around this time that Mary, soon-to-be Queen of Scots, was married to soon-to-be King of France, François II. If he had not inconveniently died, plunging Mary into a vulnerable position, Scotland’s future might have been very different.

As we have seen above, this style was re-employed in the 19th Century during the Neo-gothic revival that swept through Victorian Britain, but the original 16th Century Scots Baronial style can still take your breath away. 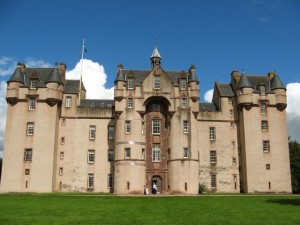 Fyvie Castle in Aberdeenshire is one of the most stunning examples. First built in the 13th Century (some claim 1211) as a defensive royal tower, every family who owned it since then has added another tower.

Notice the unevenness of the roof line, a common feature of Scots Baronial, and the imperiously high straight walls, an echo of its medieval past. The castle carries many bartizans, those little turrets that jut out from the topmost corners of the walls, but the roof spires are not as pointedly gothic as they sometimes became during the revival. You can see crenulations along the tops of the walls, but few lancet windows, which was not unusual. Windows were starting to be larger and made from plate glass, as a castle’s defensive purpose gave way to the more decorative renaissance age.

Charles I, the one who lost his head, lived here as a child, and before the castle was built it was the site of an open-air court held by Robert the Bruce.

In 1599 Alexander Seton, Fyvie’s owner at that time, commissioned the building of the grand central entrance known as Seton tower. He also had a great processional staircase built inside. It was Alexander Seton who in 1592 married Lillias Drummond, thought to be the ghost known as the Lady in Green who haunts the castle. Fyvie Castle had long been cursed by Thomas the Rhymer, an eccentric 13th Century Scottish laird and seer, who told the owner that no male heirs would ever be born within the castle walls. (This turned out to be true for 6 centuries).

After nine years of marriage to Alexander, Lillias gave birth to four daughters in succession. He held her entirely responsible for the lack of sons, as men did then, and found himself another wife. How Lillias died is not exactly known. Some say she wasted away of a broken heart, some say he killed her. By 1601 she was dead, at 29 years of age.

Alexander married his new flame, but on their wedding night they were severely disturbed by the sounds of a disembodied sighing woman. In the morning, scratched into the stone windowsill outside the bedroom, upside down, was the name Lillias Drummond! No one knows how it got there; the bedroom window is fifty feet from the ground. Her carved name can still be seen to this day.

In 1920 the skeleton of a woman was found in the walls of a bedroom during excavations to the castle. Could this have been the body of Lillias Drummond? Spooky things started happening when it was moved to be decently buried, so the renovators put it back! 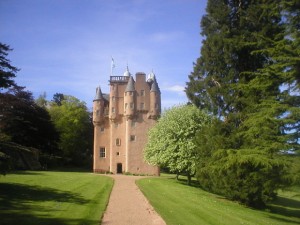 A truly fairytale tower house this: pretty bartizans supported by high corbels, covered with pink harling and a generous helping of gargoyles. You can imagine Rapunztel letting down her hair from one of the upper windows. Though work began on the castle at the end of the 16th Century, it was finally completed around 1626.

Harling is a plastering process that covers the bare stone using a slurry of small pebbles. It is then rendered with a coloured lime wash. Harling is perfectly adapted to the Scottish weather, as it is hard wearing and long lasting.

Craigievar Castle, in Aberdeenshire, stands seven storeys high. It was seat of the Chief of Clan Sempill, and the Forbes-Sempill family who inherited that lineage lived within its walls for 350 years. Now it too belongs to the National trust for Scotland.

The castle fell into terrible disrepair by the nineteenth century, and its owner considered demolishing it. John Smith, a noted architect of the period, advised against, as to lose it would have been an architectural tragedy. So he took on the repairs himself, re-building the roof and replacing windows and harling. Thanks to him we can enjoy it today as one of the finest examples of original Scots Baronial architecture still standing.

It’s well worth a visit. Craigeivar boasts some of the finest plasterwork ceilings in Scotland. For information on opening times please use this link to Visit Scotland 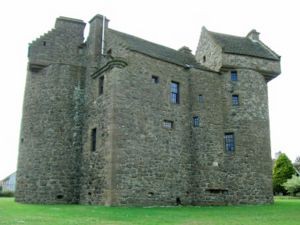 Claypotts Castle near Dundee, and early and eccentric example of Scots Baronial

One of the most unusual castles of its type, Calypotts is built in a Z-plan, which was popular in the 16th century. This consists of a rectangular middle section with two massive towers at diagonal corners. The tops of each of the towers are corbelled with square garret chambers, like little roofed houses balanced on top. Note also the ‘crow-step’ gables on the garret chambers, another popular feature of Scots Baronial.

Building started in 1569 and finally finished in 1588, and it has barely been altered since then. It was built by John Strachan for himself, his wife and their seven children. Their family had been tenants of Lindores Abbey near Fife, paying £12 a year (and 12 chickens) in rent for the scrap of land they farmed. In 1559, as the reformation swept Scotland, John Knox, Scottish protestant reformer, sacked the Abbey and divided big chunks of land between local families. The fortunes of John Strachan and his family were suddenly extremely buoyant. Ten years later Scrachan was able to build Claypotts Castle to reflect their new wealth.

Claypotts ended up in the ownership of John Graham, Viscount of Dundee, who led a successful Jacobite victory in the Battle of Killiecrankie in 1689. Unfortunately he also died there. He was nicknamed ‘Bonnie Dundee’ for his bravery. He never occupied the property, and it spent the remainder of its serviceable years being lived in by farmworkers (who presumably couldn’t believe their luck), which is a fitting tribute to the humble origins of its founder. 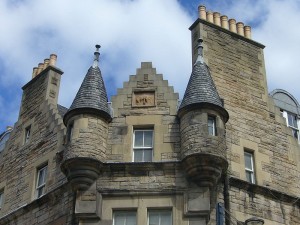 During the nineteenth century revival many town houses adopted elements of Scots Baronial, with crow-stepped gables, and tiny bartizans gracing the frontages of Victorian buildings, such as this tenement in Edinburgh. If you look out for these details on buildings when you next visit Scotland you will be able to state with confidence ‘that’s Scots Baronial that is!’

And finally… One of the most over the top representations of Scots Baronial is this extraordinary concoction in Aberdeen, built in 1896: the Salvation Army Citadel. 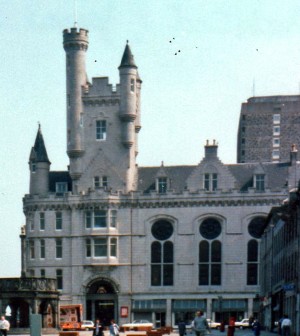 By the beginning of the Twentieth century the Scots Baronial revival had started to be viewed as a bit ridiculous, as architects rushed to embrace modernism. But thanks to these surviving buildings we can still enjoy the more fanciful fashions of our forebears.