Home➤ News & Events➤ Blog➤ The Scottish Breakfast; 1 delicious tradition you will not want to miss!
BECOME A LORD OR A LADY NOW

The Scottish Breakfast; 1 delicious tradition you will not want to miss!

From porridge that will have you growing hairs on your chest, to sausages in the less than traditional shape, local caught fish and the kind of scones that you would not want to top with jam, there is sure to be something to cater for every taste. Maybe go and grab a quick snack before reading any further, because I can guarantee you’ll be starving by the end of the article.

What is a typical full Scottish breakfast?

A traditional full Scottish breakfast is not a million miles away from the full English breakfast which you may be more familiar with. Only thanks to several additions, it’s even better!

You can still expect to find rashers of bacon, sauteed mushrooms, tomato (but often topped with cheese) and eggs how you like them, but typically fried. What makes the plate a truly authentic Scottish breakfast however…

A Scottish breakfast would not be complete without the addition of a tattie scone! Tattie being the local name for potato.

A typical tattie or potato scone is made with mostly mashed potato (which is just potato and butter with salt to taste, no milk needed) with plain flour added to make it into a dough. This is then rolled out and put on a griddle to cook. They are traditionally served hot, but are also bought in packets in the shop, so cold potato scones are often reheated by toasting or frying.  One traditional recipe calls for two ounces of flour and half an ounce of butter to one pound of potatoes. 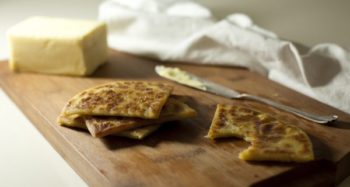 There is a common misconception that potato scones are something made with leftover mashed potato, but that would create a totally different texture- to have a proper soft and floppy potato scone you need to use hot, or warm at least, potatoes.

In my opinion, the only way to eat a tattie scone is hot, and spread with loads of butter, but they also work well dipped in egg, with other toppings of your choice, or even inside a breakfast bap.

The Lorne sausage is also often known as a square sausage or sliced sausage and is one of Scotland’s best loved breakfast foods.

The exact origins of it are unclear, but it has been around since at least the 1800’s. It is made with minced meat, traditionally beef, but nowadays often pork too, or a combination of both, mixed with rusk and spices, and as unlike the traditional sausage it has no casing it is traditionally packed very tightly into a tin to be cooked and to hold it’s shape. 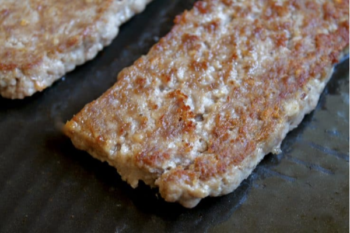 There is a popular Scottish myth that the Lorne sausage was named so after Glaswegian comedian Tommy Lorne, who supposedly made jokes about the quality of the sausage, likening it to doormats, but unfortunately there is no evidence that this is true.

Scot’s love their sausages so much that they have added them to the list of PGI protected foods, meaning that it can only really be called a Lorne sausage if it has actually be made in Scotland. But if you want to try making you own imitation version, to complete your full breakfast, or equally tastily as a sandwich filling, wherever you are based, here is a recipe we’d recommend.

Much like it’s sister black pudding, there seems to be a real love it or hate it reception when white pudding is mentioned! Outside of Scotland when people hear what it is made of it often turns them off. But honestly, you just have to try it!! Black pudding may feature in a Scottish breakfast too, as well as in a Full English, but for some reason the white pudding does not seem to have achieved the same international success. 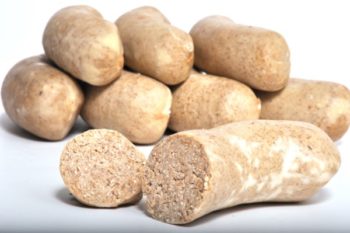 White pudding, or Mealy Pudding as it is often known, is broadly similar to black pudding, the main difference being that it does not include blood.

Most recipes are made with suet or fat, oatmeal or barley, breadcrumbs and in some cases pork and pork liver, filled into a sausage casing. It can be cooked whole or it can be cut into slices and then either fried or grilled. As well as being a staple in a Scottish Breakfast, you will often see deep fried white pudding appearing on the menu in your local chip shop!

Scotland are all about hospitality, and although they may not have any traditional Vegetarian options, they have adapted many of their iconic meat options to be totally inclusive of veggie and even vegan diets.

Just to start with I have just stumbled across this incredible vegan square sausage recipe!

I would also expect you to be offered breakfast staples such as scrambled eggs or beans on toast, variation on cooked tomatoes and mushrooms, cereals, pastries and toast.

What do Scots eat for breakfast?

A traditional full Scottish breakfast is a staple of every B&B, hotel and cafe you could stumble across North of the border, but similarly to their neighbours across the UK, I can’t imagine there are too many Scots finding the time to whip a full breakfast up every weekday morning before work. So with the real deal confined to luxurious brunches out and perhaps leisurely Sunday mornings with the papers, what would you find on the menu in your average Scottish home on a Tuesday morning?

Many of the older Scottish generation would be aghast at the suggestion of anything other than traditional porridge for breakfast, and heaven forbid if you tried to serve them the wrong kind of oats! Scottish oats are unique in that the groats are ground into a finer meal, which gives a nice, creamy texture. 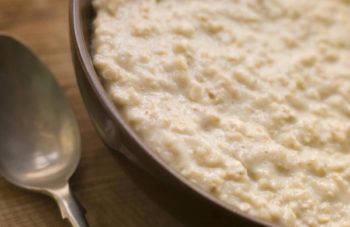 Since the late medieval times, oats have been growing in Scotland and used to be part of the staple diet of farmers (or crofters, as they were known in Scotland). As oats are such a highly nutritious and sustaining food, they are perfect for the colder and harsher weather often found in Scotland.

All that time ago, there were no methods available to preserve the oats, so a thick paste was often made with the oats and water to extend their shelf life. Traditionally, the porridge was cooked in a heavy saucepan with water and a little salt, and this is how many still take it today, preferring the savoury taste to the porridge with added sugar favoured in England. And the consistency is always thick!

Porridge was such a staple in Scotland that in the 15th century a tool was designed especially to stir it! The wooden spurtle is a thick, wooden cooking tool, shaped like a stick with a small surface area to keep the oats from sticking to the tool and for stirring without creating lumps.

The old Scots superstition was that in order to ward of evil spirits, porridge should be stirred only using the right hand, in a clockwise direction!

The Aberdeen Rowie, also known as a Buttery, is a savoury Scottish bread roll, known for it’s flaky texture and buttery taste. Some have likened it to a flattened out croissant with a savoury taste, and they have been around for many years. They are so popular they have actually become available worldwide. 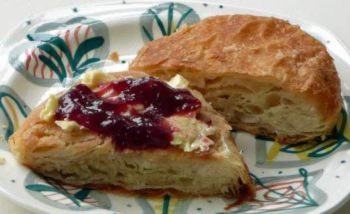 Rowies are incredibly fatty, in fact just one roll can account for 49% of your daily recommended allowance of saturated fat. Despite their name, Butteries don’t traditionally contain butter, they were in fact made with lard. They do last an incredibly long time though. They were originally made for fishermen who needed their food to last for a fortnight.

If you want to blend in with the locals, it is important to spread your toppings on the flat side of your buttery!

The word Rowie has become internationally recognised, and was in fact added to the Colins English Dictionary in 2012.

These rolls really are one of the most delicious Scottish Breakfast foods I have ever tried! If you fancy yourself a bit of a baker and would like to give them a go a home, here is a simple recipe you could try.

The Arbroath Smokie is a kind of smoked haddock which is a speciality of the town of Arbroath in Angus, Scotland. But it’s origins are said to be completely accidental!

Whether this is true or not, the resulting fish are renown across the country. The haddocks are salted, tied and dried, then hung over a triangular length of wood to smoke in a special barrel containing a hardwood fire. 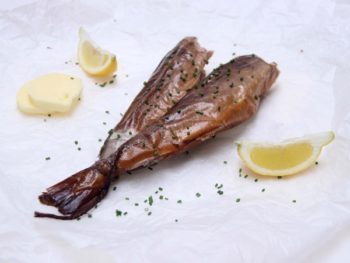 Typically this process takes less than an hour, and if you are lucky enough to be in one of the regions that serve this up as a breakfast dish, you really must try it!

Scottish breakfast tea tends to be the heartiest of all of the breakfast teas, possibly due to how soft the water is in Scotland. Many years ago, before we had the luxury of so much choice, local teas were blended specifically for the water conditions in the areas in which they were marketed and consumed. Therefore we can assume that the water in Scotland demanded a stronger brew.

Although there is no one specific formula used across the various brands, we know Scottish Breakfast tea will be a strong black tea, and it may also include teas from China, Assam, Ceylon, Africa, and/or Indonesia, and is suited best to being consumed with added milk.

Where can you enjoy the Best Scottish Breakfasts…?

There are two places in particular that are more than worth a mention. Strath Lodge Glencoe is just the perfect place to enjoy the heartiest of Scottish breakfasts, with it’s bright and airy breakfast room which enjoys spectacular views to the surrounding mountains.

And the Fern Villa Guest House if you are looking for a little getaway is well worth a visit for their delicious Bed & Breakfast.

CHECK IT OUT HERE

Glasgow is such a huge and diverse city, there are so many great places to choose from, so we can understand if you don’t know where to start. But we can suggest sampling one of these eateries first- the top 10 Glasgow brunches as voted by visitors!

Likewise in Edinburgh there is almost too much choice, so we found these great recommendations for 11 of the best breakfast and brunch spots in Edinburgh.