Scottish Names (Including the Top 20 Baby Names of last year)

Would you recognise a Scottish name when you saw one?

Or perhaps more aptly, would you be able to pronounce any Scottish names if you saw them? Maybe you are interested to find out more about the history and heritage of some of the more unusual names, or maybe you are looking for inspiration for what to name your wee sprog on the way, especially if they have a Scottish connection! Then we’ve got you covered here!

All across Scotland, from Northern most Dunnet head, all the way down to the most Southern Mull of Galloway, Scottish names are widely used and really capture the spirit of Scottish heritage. But now, their usage is becoming more widespread, namely thanks to television, movies and books, with more and more Scottish names becoming popular throughout the rest of the UK and even around the world. 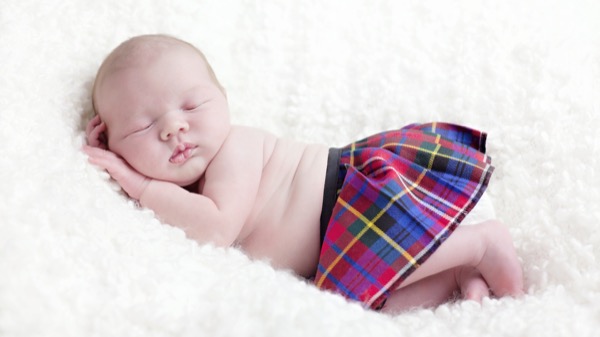 A sleeping ‘Bairn’ – the Scottish name for a child

Some names of Scottish origin have become so widely used that you may not even have realised where they hail from. And then there are the classic Scottish names that have filtered out, the old-time favourites, those names that you have heard for decades and can instantly picture the kilt.

Here we have gathered together 10 of the best and most mainstream Scottish names and their meaning for you to get started:

Gaelic is a Celtic language, spoken mainly in the Highlands and Islands of Western Scotland. As you can see from the popular names we have touched on already, it has inspired many names that are used across the English language today. Some of these names have a more English sounding translation which is used more commonly, but some of my most favourite and the most beautiful Scottish names are the authentically Gaelic ones. As long as you can figure out how to spell them!

Some of the still popular, and some less common, Gaelic names found in use across Scotland today are:

There are lots more Scottish names, with long lasting roots, some which have become mainstream popular and some which haven’t, which are worth mentioning. The origins of Scottish girls names are too varied to possibly list them all, but they often used to stem from what clan you belonged to, what you looked like, or where you lived near. Other names were once nicknames that have developed into real names. There has definitely been a growing trend over recent years to give girls in Scotland much more attractive-sounding names.

So we have rounded up a handful of what are, without a doubt, the most wonderful on the ear girls’ names!

When it comes to Boys names, Scotland has plenty of brave, creative and inventive names to choose from. Like these top picks of ours:

Much like the rest of the UK, the people of Scotland didn’t really use last names until they were introduced by the Normans in 1066. Many Scottish last names were taken from Gaelic personal names. The surnames recorded from this time period are for the most part very similar in origin to those found in England at around the same date, mostly consisting of local place names and occupational names, and nicknames, as well as patronymic names, meaning based on the Father’s name or occupation. Some of the local surnames with the roll are derived from places within Scotland

What does Mac/Mc mean in Scottish names?

Mc is just an abbreviation of Mac, and both can actually also be abbreviated further to the much less common M’. Both are generally understood to mean ‘son of’, as in Mr MACDONALD was first called so because he was the son of Donald. But in fact the direct translation does not include an ‘of’ MAC is just the Gaelic form of a son.

The idea that ‘Mac’ names originate form Scotland and ‘Mc’ names from Ireland is bandied around a lot, but is in fact a myth.

What are the current most popular Scottish surnames?

See below, for the 20 most popular Scottish surnames, along with the percentage of people named each one in Scotland, as well as where the name originated from. 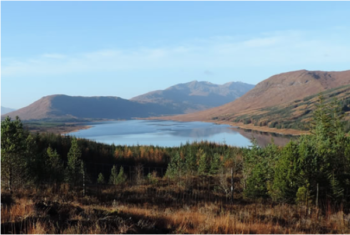 As well as Scottish names, I feel like we should touch on Scottish Titles. Scottish peerages pass down from father to son. If there is no son born, then the title would instead pass to the eldest daughter. Unlike other British peerages, the title can be passed on to or through someone who was not legitimised at birth, provided that his or her parents later married.

The ranks of the Scottish Peerage are as follows: Duke, Marquess, Earl, Viscount, Lord of Parliament (lord baron).

Then we have a Laird which is a generic name for the owner of a large, long-established Scottish estate, roughly equivalent to an esquire in England, yet ranking above the same in Scotland. Highland Titles gives you the opportunity to purchase your own souvenir plot of land in one of two gorgeous conservation sites, Glencoe or Lochaber, and style yourself as Laird of Glencoe!

The naming trends for Scottish babies include a variety of names, Scottish names and those from other origins too.

The Most Popular Baby Names in Scotland in 2020!

And if you still haven’t felt inspired enough with all the traditional Scottish names mentioned above, you might just like to know which names were most commonly chosen for babies born in Scotland in 2020. We have included the top 20 names for each sex, and in the brackets next to each name you can see exactly how many wee bairns have been blessed with that name last year: