It is fair to say that of all the dishes Scotland has produced, our various soup recipes count among the most famous and popular. Think of Cock-a-leekie or Scotch broth.

We don’t know how it happened. Perhaps it is the climate that lends itself so readily to the desire for a bowl of steaming soup, or maybe it’s the variety of fresh ingredients grown and reared on our rich Scottish soil. Whatever the reason, is there a more wholesome aroma than the smell of a well-made Scottish soup? Here are a four braw soup recipes in honour of Scottish Year of Food and drink 2015. We hope you might try these at home:

This recipe first appeared in print in 1598, but wasn’t given its current name until the 18th century. Historians suppose that it originated in France as a chicken and onion soup. It made its way to Scotland where they substituted leeks, and added prunes. Today the purists still use prunes to garnish the dish.

All cultures of the world have a version of comforting chicken soup, and this is ours. You can even find a version of chicken and leek soup in Indonesia – we fancy it is a little spicier than the Scottish version! This recipe is traditional and serves 6 hungry people. 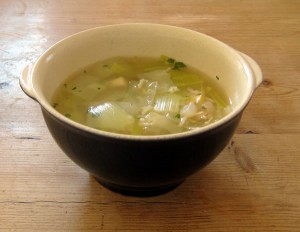 3-4lb chicken for boiling
1lb leeks (12 or so) cleaned and cut in one inch chunks
4 pints stock or water
1oz white rice
4oz cooked prunes marinated for a wee while in scotch whisky
A generous handful of bay leaf, parsley and thyme (and some parsley to garnish)
Salt and pepper to taste

In a large saucepan cover the chicken with water and bring to the boil. Add three quarters of the leeks, all the herbs, salt and pepper and let simmer for 2 hours. Add more water if necessary.

Remove the chicken from the liquid. Cut up the chicken meat and add it back to the soup.
Next add the rice, most of the prunes (save a couple for the garnish) and the rest of the leeks. Simmer for another half an hour.

Check seasoning and add more if necessary. Divide into bowls, garnish with parsley and chopped prunes. Eat! Or you can freeze and eat it when there’s a cold nip in the air.

Some food critics consider Cullen skink to be Scotland’s signature dish. ‘Heartier’ than a French bisque, ‘more assertive’ than a New England chowder. In the world of fish soups Cullen skink can hold its head up.

The purists say that Cullen skink should only be made in winter when there is a plentiful supply of the right kind of floury potatoes perfect for the smashing mashy element of this soup. Skink is a very old word. Apparently it means soup. 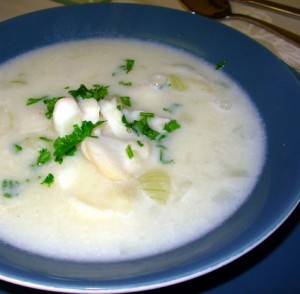 First put the haddock into a pan large enough so the fish is lying flat. Cover with enough cold water and a couple of bay leaves, and bring it to the boil. As it comes up to boil give it another two minutes and the fish will be ready. Drain and reserve the cooking liquid.

In another pan melt the butter, and add the chopped onions and leeks. Let them sweat over a low heat for about 5 minutes. Add chopped potatoes and mix around in the butter. Then pour in the cooking liquid and bay leaves from the haddock. Bring to boil and let simmer for about 20 minutes or until the potato is soft.

Remove skin from haddock and flake into bite-sized chunks. Remove any lurking bones.

When the potatoes are cooked take out a generous portion of vegetables and put aside for garnishing. Fish out the bay leaves. Then add half the haddock, all of the milk, and mash the lot together. Or you can put it all in a blender if you like it really smooth. Season with salt and black pepper.

Serve the soup into each bowl with a helping of the fish and vegetables you set aside, and top it off with a sprinkling of chives and parsley. Switch off your phone and enjoy undisturbed.

This elegant crab bisque makes a wonderful opening for a dinner party. Partan comes from the Gaelic word for crab, and bree means broth. The recipe was first published in the 18th century, though no doubt its origins are older than that. The addition of rice must have been postcolonial as rice was unknown in Scotland before merchants brought it in from India.

There are old references to all sorts of custaeceans thrown into the pot: whelks, oysters, cockles, mussels (alive alive oh). These days we just stick to crab.

This recipe is based on one produced by Michael Smith of the Three Chimneys restaurant on the Isle of Skye. It is in our opinion the finest recipe (which may have something to do with the generous slug of sherry). 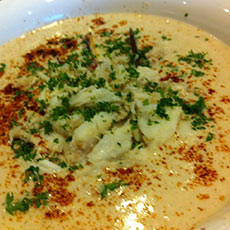 1 large crab boiled, meat removed from claws and body, shell discarded
Generous knob of butter
1 onion finely chopped
2 tablespoons of fresh chopped parsley
3oz white long-grain rice
1 tablespoon of tomato paste
Juice and jest of 1 lemon
2 pints of fish stock:
(If you can’t buy this then make it with the crab shell, a sliced onion, couple of sticks of celery and a wee chunk of fennel. Break up the crab shell and roast in oven for 20 minutes. Then get a large pan, sweat the onion in butter and add chunks of broken shell, shake the pan around. Add 2 bay leaves, sliced lemon, a handful of parsley stems, a wee dram o’ whisky. Let that all cook for a minute, then add 2.5 pints of water. Bring to boil, simmer gently for 1 hour then strain off the stock: voilà!).
6 fl oz Milk
2 fl oz Double Cream (plus some for garnish)
2 fl oz Sherry
Half a teaspoon of Paprika (plus some for garnish)

In a large pan melt the butter and sweat the chopped onion until soft. Add the rice, tomato paste and lemon zest. Cook together until the onions are lightly browned, about 3 minutes. Add the fish stock, bring the pan to a boil, reduce heat and simmer gently until the rice is soft, about 20 minutes.

Puree the soup in a blender and return to pan. Add the crab meat, milk, cream, lemon juice, sherry and paprika. Heat it again gently until warmed through, but don’t boil. Season with salt and black pepper.

Divide between 6 bowls and garnish with parsley, a sprinkle of paprika and a wee swirl of cream (optional). Then eat every bowlful yourself. Oh, ok then, share it if you must.

In 1926 The Glasgow Herald said of Scotch broth that it is ‘”Baith meat and medicine!”….The barley, diuretic, soothing; leeks, sworn enemy of stone troubles…. Parsley is a wonderful blood purifier.’

This is a hefty broth, served often as a main meal, perhaps with some chunks of buttered bread. Traditionally it’s popular on New Year’s Day because of its restorative powers to the body, after the hedonistic punishment of the night before. It tastes even better reheated the next day.

What makes it Scottish? Probably the fact that you can throw in any old leftover vegetable, proving that a thrifty soup is a Scottish soup! Here is a traditional recipe for a braw broth. 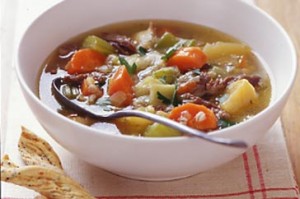 Put the neck of mutton (or lamb), pearl barley and soaked peas in a large pan with the water. Season well, bring to boil and let it simmer for 1 hour.

Add all the vegetables except the cabbage/kale and simmer for further half an hour.

Add the cabbage/kale and simmer for another fifteen minutes.

Remove the meat, it should fall away from the bone easily. Discard the bone and return the meat to the pan in bite-size chunks. Check seasoning. Decant to bowls and sprinkle with parsley.

Lock your windows and doors (If your neighbours get a whiff of that delicious smell they will want some).

We hope you will try at least one, and maybe more of these delicious Scottish soup recipes. They are guaranteed to warm your cockles (and mussels). This year of Scottish food and drink is the perfect time to try them!