The English army led by King Edward had learned from the defeat of his northern army at the Battle of Stirling Bridge, and this time their forces heavily outnumbered Wallace’s army. The two armies faced each other at Falkirk, on 22 July 1298.

Shortly after the battle Wallace resigned as Guardian of Scotland. 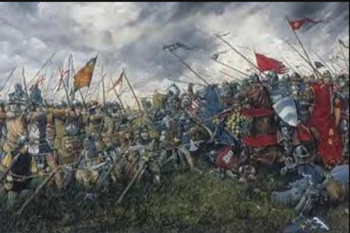 Falkirk is a large town in the Central Lowlands of Scotland, in county of Stirlingshire. It lies in the Forth Valley, 23 miles north-west of Edinburgh and 20 miles north-east of Glasgow.

Key Players in the Battle of Falkirk

Historians have argued for years over some of the details surrounding Wallace’s life, but one thing is for certain, to this day he is considered a Scottish hero, and his life is commemorated by the The National Wallace Monument.

It is believed that he was born around 1270, into a minor noble family, and it is known that he had a burning desire for peace and freedom for Scotland, which gained the loyalty of its people. Many sources describe him as being a tall and fearsome presence.

The first act definitely known to have been carried out by Wallace was his murder of William de Heselrig, the English High Sheriff of Lanark, in May 1297. He became a knight, and alongside Andrew Moray, and despite being vastly outnumbered, led his forces to a stunning victory at the Battle of Stirling Bridge in 1297. Following this, and only a year before the Battle of Falkirk took place, he was appointed the Guardian of Scotland.

Also known by the nicknames, Edward Longshanks and the Hammer of the Scots, Edward I, was King of England from 1272 to 1307. He was crowned at Westminster Abbey, aged 35, and was already widely considered a contemporary leader, he was a veteran warrior with a formidable temper.

Edward was determined to enforce the English kings’ claims to primacy within the British Isles. The first part of his reign was dominated by Wales. Edward treated the Prince of Wales, Llywelyn, as a rebel and disturber of the peace and defeated him in battle, thus ending any attempts at Welsh independence, and gaining his future son the title of the first English Prince of Wales in 1301.

The Welsh campaign had produced one of the largest armies ever assembled by an English king, and there was huge support for Edward across England. Intermarriage between the English and Scottish royal houses had promoted peace between the two countries until the premature death of Alexander III in 1286. 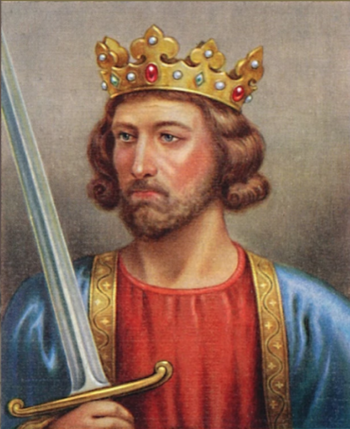 King Edward I of England

The Battle of Falkirk was one of the major battles in the First War of Scottish Independence.

The Scottish king Alexander III died in 1286 with no clear heir, so King Edward was asked to arbitrate and choose among the claimants to the throne. The king agreed, but only on the condition that Scotland’s new ruler recognise him as feudal overlord. William Wallace and others opposed these terms and hence the dispute began.

Edward, who was himself at the time campaigning in France, delegated a force to march north and resolve what he referred to as the “Scottish problem.” In September 1297, however, Wallace joined fellow knight Andrew de Moray to attack and soundly defeat a larger English force at Stirling Bridge on the River Forth in Scotland.

But that was not to be the end of it. With that defeat, Edward hurriedly concluded a truce with the French and returned to England to mount a new invasion against the scrappy rebels.

The Build up to the Battle of Falkirk

Following the success of the Battle of Stirling, William Wallace was appointed the guardian of Scotland. By March 1298 he was in effective control of the country and was able to raid into Northumberland.

By the summer of 1298 Edward had returned to Scotland from France with a large field army and a plan to bring William Wallace to battle. He mustered his army at York and advanced into the Scottish Borders towards Roxburgh Castle.  At this time Wallace evaded battle but left only a trail of scorched earth behind him to ensure no supplies could be scavenged by the English.

Edward proceeded to the Lothian coast, where Dirleton Castle was taken, and then onto Linlithgow. But the English were now suffering some difficulty as strong westerly winds were preventing their ships from landing supplies. Wallace had realised this and was avoiding engaging the English in the hope that their supply problems would force a retreat.

Edward, who was still at Linlithgow, was on the verge of withdrawing when Patrick de Dunbar, the Earl of March arrived in the English camp with information that Wallace and his army were camped only seven miles away on the road to Stirling. So Edward mobilised his army and on the 22nd July 1298 he caught up with the Scottish army near Falkirk, a small town that had evolved around a former Roman Fort.

The Battle of Falkirk

Edward’s forces included some 2,500 mounted knights and about 12,500 infantry. Among the latter group were many veteran English and Welsh archers armed with longbows.

So the army that marched into Scotland in 1298 totalled about 15,000 men, it was the largest army in English history to date. It was undoubtedly a grand sight.

Paying soldiers was becoming a more common practice in Europe as central governments grew in power. Of the 2,200 knights Edward recruited for his army, some 1,200 were paid, as were more than half of the foot soldiers. Previously, medieval infantry had been poorly armed, disorganised, and undisciplined peasants. But when paid they proved more dependable, better disciplined, and less likely to abandon a long campaign.

Wallace commanded a much smaller army of some 5,000 infantry and 1,000 mounted knights, but it occupied a strong position on a hillside south of the town with a seemingly impassable marsh to the front.

As the English approached, William Wallace divided the Scottish army into four large schiltrons, or circular battle formations. Each schiltron was made up of foot soldiers positioned tightly together in rows and armed with long iron-tipped pikes pointed outward toward the enemy. Rope was strung up on stakes around the schiltrons as a defense and to keep them in place. Some 1,500 longbowmen filled the spaces between the schiltrons. About 500 cavalry were posted in the rear of the formation.

Wallace is said to have inspired his forces with a cry of ‘“I have brought you to the ring. Now dance if you can!” 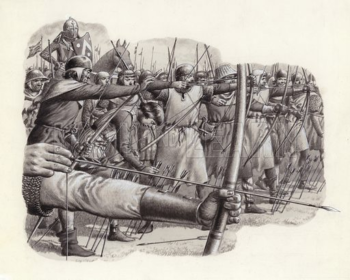 At the Battle of Falkirk, Edward had learned his lesson and deployed new tactics. Instead of fighting the schiltrons, each made up of around 2,000 men, close up with knights on horses, he used archers armed with longbows to attack them from a safe distance. The Scottish archers used much smaller bows that could only be used close up. This gave the English archers a big advantage.

Edward’s cavalry was divided into four battalions. Once they spied the enemy, 2 of these led the attack but were forced to loop around a small marsh before they could hit Wallace’s right. As both wings of the English cavalry closed on the Scots in a charge, it could only be described as disorganised. Such attacks were typical of Europe at the time; where courage and determination was valued over discipline and coordination.

This initial charge, however ill thought out, had the desired effect, forcing the Scottish cavalry to flee the field, hardly engaging the enemy. The Scottish cavalry force was largely made up of nobles whose allegiance to Wallace was not that strong (due to fact that many of them had English estates or relatives who were hostages in Edward’s hands). Possibly the reason why many of these fled before the English without striking a blow. 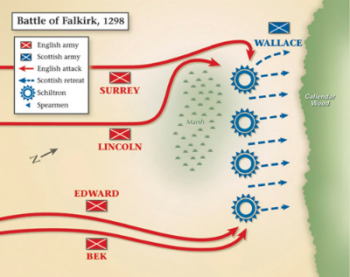 Despite these setbacks, the schiltrons were still holding firm. This is when Edward led his remaining 2 battalions in a much more organised attack.

First, Edward brought in the longbows from his infantry. Aided by crossbowmen and Irish slingers hurling stones, they quickly overcame what was left of the Scottish archers. The longbows and crossbows then turned on the schiltrons, which had been left defenseless by the flight of the Scottish cavalry.

Once the longbows had killed enough of the weakened and disorganised Scottish army, Edward ordered his knights to charge at the Scottish archers. With no Scottish knights to defend them, they had to run for their lives. Well, those that were left did, but its estimated that at least a third of Wallace’s forces had perished in this short battle. It was the first victory of the longbow in a major battle.

The Aftermath of the Battle of Falkirk

Wallace retired northward with his surviving forces, using a scorched earth policy and burning Stirling and Perth as he went. Edward followed behind him, and whilst he restored the castle and town at Stirling, he was unable to maintain his forces in Scotland. He returned south, reaching Carlisle on the 8th September 1298.

Although Edward failed to subdue the rest of Scotland before concluding his campaign, it is fair to say that Wallace’s military reputation was ruined. He resigned his guardianship in December and was succeeded by Robert the Bruce (who later became King Robert I) and Comyn. They continued the resistance against Edward I. The Guardians governed most of Scotland in the name of King John.

Between 1300 and 1303, due to the war with France, Edward campaigned in Scotland only briefly and only succeeded in controlling the south-east of Scotland. In 1303 however Edward returned with a powerful army and recaptured Stirling Castle.

What happened to William Wallace

Wallace, minus his guardianship, continued to play a part in the Scottish resistance. He travelled to Europe in 1299 to drum up support for the Scots against Edward I.

Wallace later engaged in rebel activities against England, namely guerrilla activity in Annandale, Liddesdale and Cumberland. He was relentlessly pursued by English forces, and Edward I offered a generous ransom to anyone who killed or captured William Wallace.

He was finally captured after he was betrayed for a ransom near Glasgow in 1305. Wallace was taken to London and charged with treason.  He denied this charge on the grounds that he had never sworn loyalty to Edward I, but was still found guilty, and was hanged, drawn and quartered on 23 August 1305. His limbs were displayed in Stirling, Perth, Newcastle and Berwick, as a symbol of Edward I’s total control of the British Isles.

The site of the Battle of Falkirk today 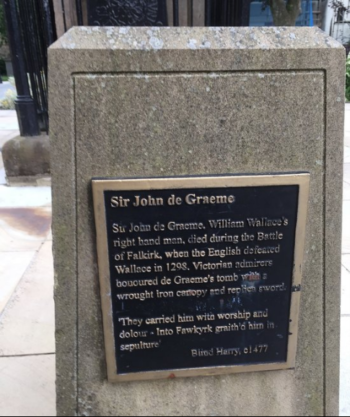 There is a graveyard at the Falkirk Trinity Church, which is known as the Faw Kirk, and it contains important historical memorials from the era of William Wallace, and from the Battle of Falkirk 1298. The site is becoming a popular place as it is believed to be the final resting place of William Wallace’s finest knight, Sir John de Graeme, whose body is said to have been carried from the battlefield and laid to rest by William Wallace himself.

Sir John Graeme had been a member of the successful army at the Battle of Stirling, and died while fighting at Wallace’s side during the Battle of Falkirk. His armour had not been properly secured at his waist and a English knight found the fatal area with his sword. History books have since recorded him as the “Right Hand of Wallace” and the graveyard is a popular visitor spot.