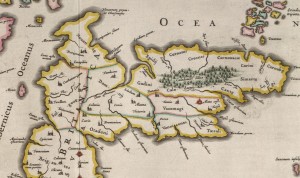 The earliest reference to woodland in Scotland belongs to the Romans, who wrote of the Caledonia Silva stretching from South to North of the Highlands. It embarrassed the Romans by hiding the natives during battles to subdue the Scots and Picts, until Hadrian gave up and had a wall installed.

A view prevails among some conservationists that the original landscape of Scotland was completely covered in trees, of which the Scots Pine, Oak and Birch would have been the primary species. While there were certainly many more trees in Scotland than there are today, it is not clear to some modern historians that in Scotland the word “forest” actually meant a tree filled landscape. Forest was also used to describe a hunting park, which would have been quite sparsely wooded. So the pretext that all areas in Scotland known as forest were stripped of trees is today a questioned one. In truth the fortunes of the Caledonian Forest have been changeable.

The possible area of the Caledonian forest at its maximum extent according to treesforlife.com (shaded area). Thought by them to be 1.5 million hectares.

The idea, which grew in Samuel Johnson’s time, that the Scots chopped down all their trees like thoughtless savages is highly debatable. There was no need for the ancient Scottish people to chop down many trees for firewood as they had a plentiful supply of peat. Nor was timber used much for building, as stone was abundant and made far warmer housing. So the ancient woodland was valued by the Scottish as pasture and shelter for cattle and sheep.

In 1303 there are written reports of forests in which William Wallace hid from the English forces. These reports include “fellers of trees” (possibly coppicers) and “branches and timber in the forest”. But by the time Samuel Johnson makes his famous tour of Scotland in 1773, he laments that he journeyed from Lothian to Aberdeen not seeing so much as a single tree. However this Eastern coastal route would not have taken him through the Cairngorms where armies of Scots Pines and oaks stood sniggering to each other about dopey English writers.

Coppicing began reasonably late in Scottish culture, but was underway by the 13th century. Coppiced areas include the woods at Rannoch, Monteith, Loch Lomond and Argyll. These woods were an essential component of the charcoal industry in Scotland which fed the Iron mongers’ furnaces of the medieval period where the likes of William Wallace bought their swords and shields. Coppicing tends to keep serviceable woodland in constant use and therefore extends its life, and all those coppiced woods are still in existence today.

Sadly coppicing as a way of life couldn’t compete with the wealthy monastery estates of the Middle Ages which were dedicated to sheep farming, and large tracts of the lowland territory they owned were used and maybe even cleared for this practice. Cattle rearing was also preferred. Because the focus was on one or other of these farming methods much of the Caledonian Forest did not regenerate though coppicing, and young tree shoots would have been greedily consumed by livestock. This, more than felling, caused the forest to die off. In its place spread vast treeless moorlands. By the 1500s this deforestation process was pretty much complete. While the acreages are wildly different depending on who you read, many claim the Caledonian forest by this time had become a mere 1% of its former size.

Map showing the remains of the Caledonian Forest today calculated at 180 km2. (small black areas). The shaded area describes the regeneration goal of treesforlife.com, one of the many conservancy projects in Scotland.

Another map this time by DEFRA, showing areas of remaining Caledonian Forest calculated by them to be 24,000 km2.

It’s not all bad news. Parts of the forest have been regenerating since Victorian times. According to the ecologist and historian, Peter Marren of the Nature Conservancy council, the great woods at Abernethy in Speyside and Glen Tanar in Deeside have been expanding, not declining, over the last two hundred years. Highland woods have the curious habit of moving over the centuries, and this is not always taken into account when calculating rates of decline. When Macbeth dismissed the prophecy that the forest would one day come to Dunsinane, that idea was not as wild as he thought.

In the 17th century prices for oak rose and suddenly Scottish oakwoods became commercially viable. The largest of these, owned by the Graham clan, were expanded and put to use. The large surviving oakwoods on the east bank of Loch Lomond formed part of this original estate. They were cut every 20 years or so, and would have been quite open woodlands with stubby oaks in various stages of regrowth. The heyday of commercial oak coppicing in Scotland spans two hundred years from around 1680 to 1880, though oak coppicing had been around for a few centuries before this renaissance.

The Scots Pine was once thought to have dominated the wildwood of ancient Scotland, but this is now contested by ecological historians. It turns out, from Paleontological research, that the Scots Pine didn’t march north through Scotland as originally thought, but invaded unexpectedly from Ireland into the northwest corner of Scotland somewhere between 8000 and 6500 years ago, and from there spread across the highlands towards the Cairngorms, and only as far south as the top of Loch Lomond. Around 4000 years ago it fell into serious decline, possibly due to climate changes, then recovered to proliferate in the northern forest landscapes, but historians now believe that the Scots Pine has never been the dominant tree in the Caledonian wood. 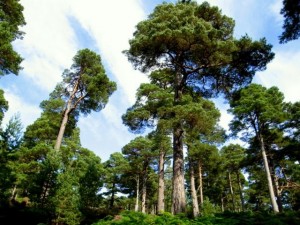 Scots Pines in the Great Wood at Glen Tanar.

The southern end of the forest apprehended by the Roman Emperor Severus in 208AD when he invaded Caledonia was most likely to be predominately oak, while the northern end of that same forest gave way to Scots Pine. Severus is the first reported individual to order the chopping down of those beautiful trees to root out some annoying inhabitants who wouldn’t let him invade.

Today massive efforts to regenerate the forest have resulted in a replanting programme which currently runs at around 4,500 hectares of new trees planted each year, including our own modest efforts at Highland Titles Nature Reserve. This planting has accelerated since the Scottish Government proposed the Scottish Forestry Strategy in 2006. The idea is to increase tree cover in Scotland by 640,000 hectares to around a staggering 2 million hectares over the next 200 years. To achieve this the planting still needs to accelerate to around 15,000 hectares a year, an order taller than a Scots pine.

If successful it could mean that about a quarter of Scotland might be covered in trees by the end of this century. The forests already generate over 30,000 forestry jobs, and the economic benefits of increased tourism would be immense. But the largest beneficiary would be biodiversity, which in these precarious times is a positive advantage. If the people of Scotland succeed, the Caledonian forest our grandchildren inherit will be a precious resource indeed.