Home➤ News & Events➤ Blog➤ Scottish land: The Glen is Mightier Than the Lord
BECOME A LORD OR A LADY NOW

Scottish land: The Glen is Mightier Than the Lord

There has been such a hoo-hah over the new ‘Community Right to Buy’ bill in Scotland which allows communities first refusal on buying land. Some think this has been a long time coming. For too long 50% of all Scottish land has been owned by a mere 432 people. But some large land owners are not giving in without a fight. Lord Atholl said of the bill: “It certainly should not be used as a tool to politically engineer property ownership away from one group of people to another as this fundamentally undermines Scotland’s credibility as a nation that respects the private sector, free markets and the protection of property rights as a cornerstone of human rights and financial security.”

So the bill is a human rights issue. On the face of it no one could argue. But consider, how some of these large landowners’ ancestors got the land in the first place and remember what human rights abuses were suffered in the process, and Lord Atholl’s argument is looking suddenly rather shaky. So what is to be done? We would welcome your comments at the end of this article. But first, we ask you to consider arguments put forward by some of the other large landowners in defence of their ownership.

Lord Lyell, who owns Kinnordy Estate, has said: “I do not believe there is justification for the wider public community to have a stake in ownership, governance, management or use of the land… land and estate management must remain in the hands of those qualified for the task”.

In answer to this argument let’s consider some facts. 55% of all Scottish agricultural land is given over to hill farming (sheep and cattle). Upland farming is known to have a negative return and to be an uneconomical use of this particular land. Hampered by a harsh climate and poor pastureland it produces livestock which is not commercially viable and must be sold to lowland farms for fattening. Most livestock production in upland Scotland would not exist at all without massive EU farm subsidies under the Common Agricultural Policy.

George Monbiot (environmental journalist) has described the Scottish uplands as ‘sheep-wrecked,’ a result of the aristocracy’s enforced clearances of crofters to make way for sheep farming during the past three centuries. As well as citing the lack of trees and other flora on the uplands as a source of flash flooding and land slippage, Monbiot says: “Sheep have reduced most of our uplands to bowling greens with contours. Only the merest remnants of life persist. Spend two hours sitting in a bushy suburban garden and you are likely to see more birds and of a greater range of species than in walking five miles across almost any part of the British uplands.”

He doesn’t blame the poor tenant farmers. He accepts that “…theirs is a tough, thankless and precarious occupation.” Neither does he call for the hill farming traditions to be thrown over, but he does call for “a good deal more scepticism about the claims of those who champion it, and for a sweeping reassessment of a subsidy system which has been sold to us with a series of falsehoods. Do we really believe” He says “that keeping the hills bare, wiping out wildlife, helping to flood homes and farms and exacerbating landslips is a good use of public money?”

We would like to submit the scientific findings of Ron Greer (freshwater biologist) and Derek Pretswell (zoologist), authors of ‘Eroding the Mountains of Inertia’. These two scientists looked at Scotland, then Norway (a similar bioclimate), then they looked at Iceland. They report that a thousand of years of ‘ovine-wrecking’ in Iceland have caused an island once 40% covered by broad-leaved forest to look now like an alien landscape. In fact Iceland had many of the same varieties of broad-leaved trees that Scotland has known. We have only 300 years of hill farming in Scotland, but we too could easily start to look like Iceland given another 500 years of dedicated livestock farming.

When Ron and Derek went to look at the Vestlandet of Norway to study its rich biodiversity, a landscape that could so easily be Scotland’s alternative future, they concluded that: “The…bioclimatic similarities [of Scottish upland] to the Vestlandet of Norway and the vibrant cultural landscape obtained within it, give the lie to accusations of the ‘McCannaes’ (Eng. Trans: sons of we can’t) that there is no other end point of tenure and use possible for upland Scotland than the current indulgence of a landed minority in what for many of the rest of us is a quasi-feudal, Victorian-Edwardian nightmare-world supported by public subsidy.” 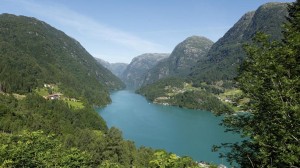 Strong words indeed. Can they support this? Well yes. Having seen and recorded the effects in Scotland of de-forestation, a decline in bio-diversity, and declining fish populations, they concluded that blame lay with “…the complete underestimation of what is possible due to the lack of perception of where we are bio-climatically, coupled to the habitual mismanagement by generations of landowners … and the conservatism, generated by the vested interests of the resource holders and policy makers.” Though Ron and Derek would like to stress that there are some exceptions.

At the end of their stark report they conclude that Scotland has become “the world’s most beautiful ecological slum.”

Lord Roxburghe, owner of Floors Castle and the Roxburghe Estates, says: “Responsible use of land whether in private, public or community ownership, should be the determining factor and we are disappointed that the remit…concentrates so heavily on expansion of community ownership.” He is worried that community ownership would open the gates to irresponsible owners who might wreck the ecology through mismanagement.

Here’s another popular landed-gentry argument. Lord Seafield, owner of the Seafield and Strathspey Estates, said: “Flora and fauna live in a habitat not bounded by ownership issues and the larger footprint of estate management allows government policy – including programmes for the benefit of endangered species and habitats…to be implemented more easily and cost-effectively than would be the case in fragmented ownership.”

Submit exhibit A – Highland Titles Nature Reserve. You can’t get a much more fragmented ownership than an average of a square foot each, and yet endangered species and habitats are benefiting hugely from this arrangement. This is one extreme model, and we have barely begun to explore other possibilities to wildlife that could be secured within a framework of communal ownership.

Let’s finish with two voices from the other side of the argument. Peter Peacock, Policy Director of Community Land Scotland, who, rather generously, says: “People are very capable. Given the opportunities you will find communities doing amazing things.”

And finally land reform campaigner, Andy Wightman: “I want to live in a land where class distinctions are no longer legitimised by the recognition of aristocratic titles and where the principle of equality underpins access to land rights… I want to live in a country that ﬁnally puts an end to the centuries of landed power and returns the land to the people of Scotland.”

What do you think?

Are the gentry right? Should they continue to be considered the best custodians of Scottish land if they can prove their qualifications? Have your say in the comments below.

Conservation, Nature Reserve, Uncategorised
Spring Cleaning at the Reserve »
Conservation, General
The Scottish Terrier (Could this paw-some pup be the perfect pet for you?) »