The haunted Stones of Mull

If you go down to the woods today, you may be in for a surprise. On the isle of Mull a line of standing stones tell a strange tale. Known locally as Cnoc Fada, or Dervaig B, two upright stones and 3 fallen ones sit in a clearing in a pine wood.

No one knows why our ancestors went to the trouble of placing them there 4000 years ago. Research shows that they lie NNW to SSE, lining up exactly with the angle of the rising and setting moon at the Lunar Standstill, a time when the moon reaches its maximum declination. This takes place every 18.6 years, and was of apparent significance to Bronze Age people.

The original plan for these stones was evidently astronomical (and hypothesised as devotional), but in the intervening ages of superstition and dread many legends and stories grew, among which that the stones had been wicked godless people petrified into stone by an angry Christian god.

The Cnoc Fada stones on Mull are easy to get to, just north east of the village of Dervaig. The two uprights stand about 8 feet tall, alone and silent in the stillness of the clearing. It is an evocative place to visit, but if you are easily scared don’t approach it at dusk. This is the time some people have encountered the incongruous figure of a middle aged man in an old fashioned tweed jacket.

An American woman found him sitting on one of the fallen stones sobbing loudly. When she asked him the matter he wouldn’t tell her, but muttered strange Gaelic-sounding words she couldn’t understand. She retreated in confusion, only learning later that he was a ghost. Others have seen him stamping his feet and shouting, paying no attention to passers-by. This apparition is thought to be a notorious alcoholic, Flinty Nichols, who died in the vicinity many years ago.

One night at dusk an intrepid English ghost researcher went out to Mull with his friend to take readings with various bits of equipment. Their compass went haywire, turning completely around anti-clockwise near one of the stones. They sat quietly in the clearing for a while soaking up the atmosphere but the desire to leave grew as night fell because according to one of them the stones looked increasingly threatening. Soon they began to hear unexplainable noises: the sound of stone being hit against stone, and low chuckling. They had a clear line of sight to see if anyone of the corporeal variety could approach and play tricks on them, but no one was there, the woods were empty. It spooked them enough to make them pack up their things and flee back to their hotel!

The Isle of Mull is well worth a visit. The second largest island in the Inner Hebrides after Skye, it has been inhabited since about 6000BC and has many sites of Neolithic interest, and three castles, including the famous Duart castle, a thirteenth century seat of the MacLean Clan, made famous in the movies ‘For Whom the Bells Tolls’ and ‘Entrapment’.

Duart Castle has its own ghost. A headless horseman, allegedly killed by a MacLean, heralds any death in the MacLean family. Apparently he appears to the dying family member as if waiting to carry off his soul. It’s perfectly safe to visit, but if your surname is MacLean don’t talk to any strangers unless you can be sure they’re definitely wearing a head (preferably their own). 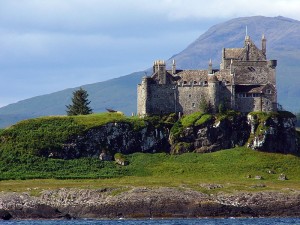