The Links Between Scotland and Norway

Scotland and Norway share strong links that stretch right back to Viking times. Northern Scotland, was, at one time, a Norse domain and the Northern Isles experienced the most long-lasting Norse influence. Almost half of the people on Shetland today have Viking ancestry, and around 30% of Orkney residents.

Many agree that there are many points of commonality between the Norse character and the Scottish one that leads to a sense of kinship between the two countries, even for those living much further south in Scotland, where Viking influence did not reach. Words like bairn and muckle made their way into Scot’s language via the Norwegians.

More recently, Scottish politicians have sought to align Scotland with Nordic policy, and to hold Norway up as an example of a prosperous nation that could show a route forward for their country. The historic and cultural links between Scotland and Norway (and other Nordic nations) suggest that Scotland could have even closer ties with Scandinavian nations moving forwards.

01. The Historic Background to Links Between Scotland and Norway

The Viking raiders and settlers that reached Scotland between the 8th and 15th Centuries were mainly Norwegians – though they did also include other Scandinavians. Norse contact with Scotland certainly pre-dates this period, though the nature and frequency of this contact is unknown. Viking held territories included the Northern Isles of Shetland and Orkney, the Hebrides, the islands in the Firth of Clyde and mainland territories in Caithness and Sutherland. Knowledge of early colonisation patterns is patchy, but it is clear that the Northern Isles were the first to be conquered, and the last to be relinquished by the Norwegian crown.

The Scottish Norwegian War of 1262-1266 arose due to disagreement over ownership of the Hebrides. Scottish sovereignty over the Hebrides and Isle of Man was gained, while Norway retained Shetland and Orkney. 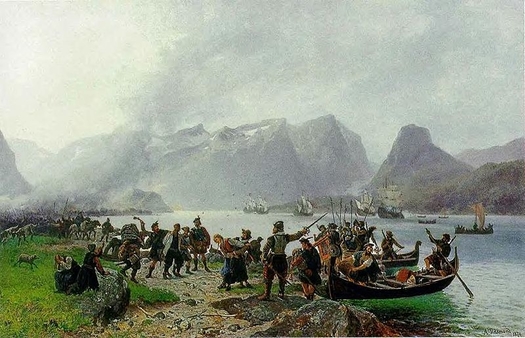 Landing of the Scottish forces in Isfjorden, 1612. / Public Domain

Norse colonies and settlements impact on peripheral Scotland can still be found in place names, language, genetics and other elements of cultural heritage. It is believed that Viking invasions may have inadvertently played a role in the creation of modern Scotland.

Even long after the Viking period, the links between the two nations remained strong – specially in those Northern Scottish areas with the strongest historical links to Norway.

Timber trade between Norway and the eastern ports of Scotland was strong during the 16th and 17th Centuries. In fact, Scottish involvement in timber trade was so great that the Norwegians referred to it as the Skottehandelen (Scot’s Trade). Traders brought timber to the timber yards of Eastern Scotland and many settled in Norway. Much of the trade went through the city of Bergen, which was conveniently sited for Scottish shipping. The Rosenkrantz Tower of the Bergenhus fortress was redeveloped by Scottish architects and masons in the 1560s.

During the Second World War, ‘the Shetland bus’ provided a transport link between the Shetland Islands and occupied Norway. Many Norwegian refugees fled their occupied home with the help of Norwegian sailors who undertook daring, high-risk trips across the North Sea. The whole episode became emblematic of the friendship across the seas. 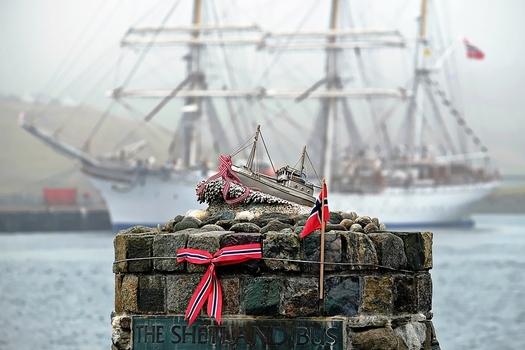 Norway and Scotland (and the rest of the UK) have also had strong common interests in the development of offshore oil and gas resources. Many of the links, for geographical regions, are between Norway and Scotland – much trade passing between the two towns of Stavanger and Aberdeen. Decommissioning defunct oil structures in the North Sea has been another link between the two countries. Shetland plays a major role in this decommissioning process through a facility in Lerwick. Norwegian company Aker Kvaerner and Scottish companies have united to dismantle platforms. These are recycled and waste turned into energy to provide hot water to much of Lerwick.

In recent years, there has also been a proliferation of new transport links between the two countries – both by air and by sea.

“To Noroway! to Noroway!
to Noroway oer the faem!
The king’s daughter to Noroway
‘Tis thou maun bring her hame.”

Margaret of Scotland, Queen of Norway

These lines are from the Scottish Ballad of Sir Patrick Spens. While the ballad may merely be fiction, it may also refer to an actual event. One of the two actual events to which it may refer involves Margaret, daughter of Alexander III of Scotland and Margaret of England. Margaret remained unmarried until the age of 20, unusual for a medieval princess. She was finally betrothed to Eric II, King of Norway, in 1281, in an attempt to ease tensions that had developed between the two nations over the previous decades.

Margaret was conveyed by Scottish sailors to Bergen and the marriage with the 13 year old King took place. The knights and nobles who had conveyed her to the wedding drowned on the return voyage, which may have partially inspired the ballad quoted above. Margaret herself gave birth to her only daughter (see below) in 1283 but sadly died during or shortly after the childbirth.

Margaret, the Maid of Norway was the daughter of Margaret of Scotland and Eric II of Norway. When Alexander III of Scotland died in 1286, the infant maid became Queen of Scotland. Her father began negotiations to betroth her to the heir to the English throne. A Scottish envoy was sent in 1290 to bring her home from Norway to Scotland. But unfortunately, the seven year old became sick on the voyage across the North Sea and died on Orkney (most likely of food poisoning). Her death triggered a succession crisis and, ultimately, led to the Wars of Independence. Margaret was the last of the line of King William the Lion. St. Margaret’s Hope, a settlement on South Ronaldsay, Orkney, is named after her. 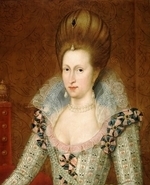 The ballad quoted above may also have its roots in another later monarch who linked Scotland and Norway. The name ‘Sir Partick Spens’ is likely an invention, but some have suggested that the character is based on Sir Patrick Vans of Barnbarroch. Vans was the diplomat sent to broker the marriage between James VI and Anne. He accompanied James VI when he set out during stormy weather to bring home his bride, who had been driven back to the coast of Norway by storms. Queen consort of Scotland, England and Ireland, Anne bore James VI three children who survived infancy, including the future King Charles I. 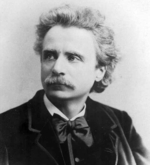 Edvard Grieg (1843-1907) is undoubtedly the most famous name in Norwegian music. He was born in Bergen, but his surname is a clear reminder of his family’s Scottish roots. Grieg’s great, great grandfather was John Grieg, Greig or Grig, who lived from 1704-1774. He was a respected tenant farmer in Aberdeenshire. Two of John’s sons including Alexander (Grieg’s great grandfather) emigrated to Bergen in around 1770. A number of their descendants still live in Bergen to this day.

Colin Archer was a Norwegian naval architect and shipbuilder who was born in Larvik, the 12th of 13 children born to parents who had emigrated from Scotland to Norway in 1825. Archer is best known for his famous ship, the Fram, which was used in both Fridtjof Nansen’s and Roald Amundsen’s polar expeditions. The ship is now preserved in the Fram Museum in Oslo, Norway.

Leif Andreas Larsen, from Bergen, was one of the most famous crewmen of the ‘Shetland bus’. He made no fewer than 52 trips across the infamous North Sea in small fishing boats, often at night and in appalling conditions. He was just one of the many man who risked their lives to transport agents and operatives to and from Norway during the German occupation between 1941 and 1945. 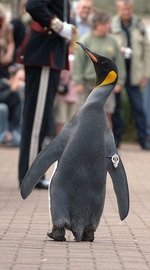 One final famous figure that links Scotland and Norway is not a person at all. Brigadier Sir Nils Olav III is a king penguin living in Edinburgh zoo! Roald Amundsen, the explorer, presented Edinburgh zoo with its first penguin when it opened in 1913. The Norwegian King’s Guard visited Edinburgh in 1961 and a lieutenant in the regiment, Nils Egelien, became interested in the zoo’s penguin colony.

When the guards returned in 1972, he arranged for the regiment to adopt a penguin. The penguin was named Nils Olav in honour of Egelien and King Olav V of Norway. He was given the rank of lance corporal, and has subsequently been promoted every time the regiment returns to the zoo. The first Nils Olav died in 1987, and the second in 2008. The third was promoted to Brigadier in 2016.

03. Current Trade Between Scotland and Norway

In the face of Brexit uncertainty, Scottish politicians have sought to reassure their trading partners that Scotland is still open for business. Scotland exported an estimated £1 billion of goods and services to Norway in 2017, which was 3.1% of Scotland’s total exports and Norway was ranked as Scotland’s 6th largest export partner. Unfortunately, a slow down in Norway’s economy has meant decreased exports – exports from Scotland to Norway decreased by an average of 5.9% each year between 2013 and 2017.

There are around 110 Norwegian owned enterprises in Scotland, with a turnover of £2.23 billion. These employ around 6,000 people.

As geography would suggest, the two countries also place particular importance on the energy and fishing industries. Many links have been forged between the two nations in relation to both of these industries. 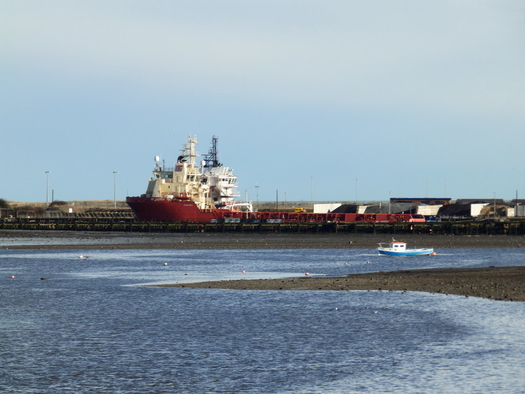 The North Sea Link, also known as the Norway-UK interconnector, is currently being constructed between Kvilldal, in Norway to Blyth in England. It is due to be completed in 2021. The Scotland-Norway interconnector (NorthConnect) is a proposed interconnector that it is believed would assist the growth of the Norwegian and Scottish renewable energy industries. If the project gets off the ground as intended, work should commence in 2020 and the link should be operational by 2022. This would be the first route to connect Scotland’s electricity network directly to mainland Europe. It will run from Long Haven Bay, near Peterhead, to Sima at the end of Hardangerfjord in Norway.

04. Educational and Cultural Links Between Scotland and Norway

There are strong educational ties between Scotland and Norway. There are hundreds of Norwegian students studying at Scottish Universities, and many Scottish students (and alumni and alumna) in Norway. A strong interest in the environment, conservation and sustainability link both nations, and there are many academic ties in these arenas between higher learning institutions in both countries.

Viking culture is still very much a part of life in the Northern Isles, particularly in Shetland.For 24 hours on the last Tuesday in January, Lerwick leads the way for community celebrations of their Viking heritage each and every year. After Lerwick’s festival is over and done, it is the turn of other communities to hold their own versions of Up Helly Aa fire festivals in celebration of their Viking past. There are a number of cultural and historic sites dating to the period of Norse settlements on the islands, including the Jarlshof Prehistoric and Norse Settlement and viking remains at Old Scatness.

There are also strong links between Scotland and Norway when it comes to the arts. There are particularly strong associations between the Traverse Theatre and the National in Edinburgh, and the National and Open Theatres in Oslo. The Norwegian Seamen’s Church in Scotland, which was established in 1864, now houses the Leith School of Art.

The links between the two nations in all regards are strong, and only set to strengthen in the coming years.

History
Did The Declaration of Arbroath Inspire the American Declaration of Independence? »
History, Uncategorised
Lochleven Castle and the Last Queen of Scotland Part 1 »