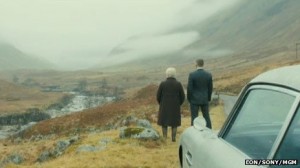 After a seat-of-pants drive north out of London, James Bond parks his Aston Martin DB5 at the side of a mountain road. He gets out and frowns into a remote Scottish glen, a scene of brooding mountains and obscuring fog. ‘M’ steps out of the car to join him. She breaks the silence. “Is this where you grew up?”

The valley is Glen Etive, just east of Highland Titles Nature Reserve. On a clear day it looks more like this.

According to reports it was bitterly cold on the day they filmed that scene and in between takes Daniel Craig strode up and down with his hands in the pockets of that iconic suit, to keep himself from freezing. At least the costume department had given Judy Dench a woolen coat to wear.

Glen Etive’s other neighbour is the more famous Glencoe, some of which was also used to film ‘Skyfall’. Though the eponymous Scottish mansion of the movie title was actually a purpose-built timber and plaster replica in a field in West Surrey.

‘Skyfall’ is the fourth Bond film to feature a Scottish back-drop. Last time was when ‘The World is Not Enough’ used the dramatically beautiful Eileen Donan Castle as the Scottish HQ for MI6, in which a reluctant Pierce Brosnan is relieved of active service until a medical examination can pronounce him fit again. Does 007 follow that advice? Not likely. 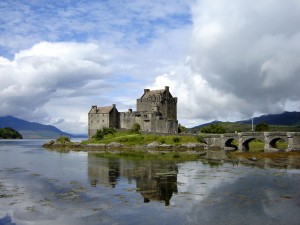 Scotland has more links to Bond than just the movies. The writer Ian Fleming, Bond’s creator, had a family connection in Glen Etive. Nestled in the glen is Dalness Estate, which once belonged to the Fleming family. It was recently sold for around £2.7 million. Ian Fleming was brought up in London. The son of an MP, he went to Eton, then Sandhurst before working as a Naval Intelligence officer in World War 2 (code name: 17F, and allegedly something of a tiger with the ladies). It’s likely he spent many of his childhood summers on the Estate in Glen Etive, and it may well have been the influence for Bond’s fictional childhood home of Skyfall.

Ian Fleming gave James Bond some Scottish heritage, revealing in the novel ‘On Her Majesty’s Secret Service’ that Bond’s father hailed from Glencoe. Some say that Fleming was so impressed with Sean Connery’s Scottish-inflected portrayal of 007 in ‘Dr No’ that he decided to give him Scottish ancestry. However, there may be another reason too.

Some think that Fleming based his character on a real person, also with a Scottish heritage, his friend, Sir Fitzroy Hew Maclean who was also at Eton, and later in the British Army, travelling incognito throughout Russia, and serving as Churchill’s special envoy in Yugoslavia during the war. Maclean’s family home is another remote Scottish castle, Duart on the Isle of Mull. Though, being the son of a serving officer, he was born in Egypt during his father’s tour of duty there. 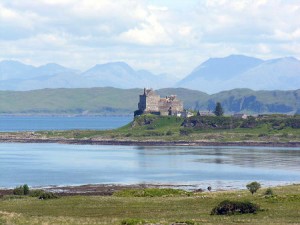 When Maclean passed the difficult exam to enter the diplomatic service after leaving Cambridge, he was marked by his superiors as ‘one to note’. They expected extraordinary things of him, and he didn’t disappoint. His autobiographical narrative ‘Eastern Approaches’ tells of his extensive travels in Soviet Russia, a dangerous occupation for a Westerner at the time. Maclean was constantly followed by Russian Secret service agents and had fun shaking them off by spontaneously changing his modes of transport. But he denied that he was actually a secret agent himself. He maintained that those journeys were entirely for his own ‘self-realisation’. We believe you Sir Fitzroy.

Scotland is proud of its Secret Agent links, both fictional and real. The stunning panoramas of Glencoe and Glen Etive, the moody and atmospheric old castles, lend themselves beautifully to the thrill and drama of the Bond franchise. If you visit our Nature reserve, take time out to visit these neighbouring glens and castles, and feel the magic. 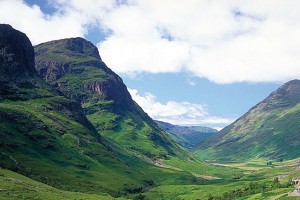 History, Tourism
The Links Between Scotland and Norway »
Nature Reserve
Update From The Reserve – October 2017 »