Charles Edward Stuart, better known as Bonnie Prince Charlie is the subject of the beautiful ‘Skye Boat Song’, written in 1884. He was the grandson of James II of England/VII of Scotland, and was the man who led the last Jacobite rebellion. (‘Jacobite’ is derived from the Latin for James). Highland Scots were staunch supporters of the Jacobite kings, who were descended from Robert the Bruce. 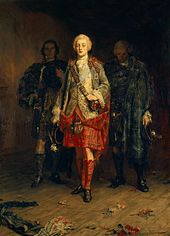 The history of the deposed Stuart kings is a story filled with romance, injustice, bullying and the daring rescue of a Polish princess, Charlie’s mother.

During his 3 year reign, James II had tried to promote religious tolerance in England and Scotland for Catholics and non-conformists of all kinds, but the protestant church, in which lay the power of the establishment, took a hard line.

Mary, James’s daughter was the next in line to the throne. She had married the Protestant Dutch prince, William of Orange, which ensured a protestant future for England and Scotland. Knowing this, the establishment tolerated this liberal-minded Stuart king for a time. But the birth of a son, James Francis Edward, in June 1688 changed everything. This baby would have been the future James III of England/VIII of Scotland. Devotion to the Catholic church was the undoing of James II and his son. The Protestants were anxious about James’s close ties to Rome.

James II did himself no favours by declaring the ‘Divine right of Kings’. The way he saw it: if God had put a Catholic on the throne then Catholicism was the way God wanted it. It wasn’t the first time the English had disagreed with a king about divine right. His own father, Charles I, had lost his head over similar claims. At least James II was allowed to keep his, but was forced into exile by parliament and his protestant son-in-law William of Orange.

The Vatican maintained that the Stuart princes were the only true monarchs of England, Scotland and Ireland, and supported them during their exile. Louis XIV of France gave James II a French palace, and his son, James (III) was in time given a palace in Rome by the Pope.

James III’s court-in-exile under the protection of the Vatican, was a center of enlightened religious tolerance. Though he was Catholic he surrounded himself with many protestants, which was unheard of in Rome. A visiting MP and protestant from the British Parliament, Lord Blandford, described James as so sincere that ‘I should become half a Jacobite if I continued these discourses any longer.’

Palazzo Muti in Rome, renamed Palazzo del Re and given to James III in 1719.

When it came time for James (III) to marry, there were problems finding a wife. By this time George I was on the British throne. George was Hanoverian with close ties to European aristocracy. No one wanted to anger the Germans by marrying a Stuart. In the end James chose a Polish princess, Clementina, daughter of Prince Sobieski, himself a deposed monarch. The Sobieskis were an extremely wealthy family. In time this wealth would be all but spent on the failed Jacobite cause.

When the marriage was announced George I was so incensed at the possibility of the Stuart line begetting another heir, that he pressurised the German Emperor, Charles VI, to imprison Clementina, and offer a reward to any other prince who married her instead. She was only 16. George also put a bounty on James III’s head and Prince Sobieski was threatened with exile from Poland. 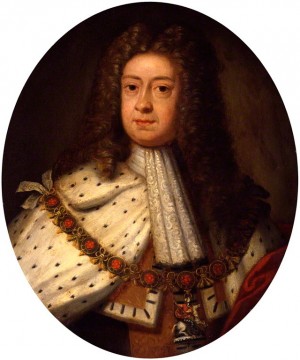 George I of England

The whole of Europe was scandalised by George I’s behaviour, but George had powerful friends. With Clementina imprisoned in Austria James was ready to throw in the towel, but Clementina had other ideas. The Irish Jacobite, Charles Wogan made a plan to rescue her from prison and get her to Italy. It was a daring escape, under the nose of the German Emperor with the feisty princess disguised as a serving maid. Clementina and James were re-united and finally married in Rome.

1720 saw the birth of their first son, Charles Edward Stuart, or ‘Bonnie Prince Charlie’. As the historian, Pininski wrote in his excellent biography of the Prince: “The Pope immediately sent greetings and presents as did the Courts of France and Spain…all Jacobite centres throughout Britain and Europe burst into unbridled celebration, and even the ten year old Louis XV of France was said to have clapped his hands for joy”.

Back in London George I boiled with impotent rage. Thus began a lifelong attack on the infant by the Hanoverian king and Walpole’s UK government. Lies were circulated that the baby was hideously deformed, that his mother was unable to bear more children. In fact in a few years Charlie gained a perfectly healthy brother called Henry, and George lost all credibility in Europe.

Jacobite uprisings occurred throughout the end of the 17th Century and well into the 18th. Charlie’s father and Grandfather had both tried and failed to take back the throne. Every time England warred with their European neighbours they risked a Jacobite take-over. It was a testing time for the Georgian kings.

Painting by Gow depicting the Flight of James II to France after the Battle of the Boyne (The first Jacobite rebellion of 1690).

The last uprising, led by Bonnie Prince Charlie in 1745, is perhaps the most famous. It ended in terrible defeat for the Prince and his Scottish army at Culloden field, at the hands of George II, and it ended the Stuart hope. They should have had support from the French fleet, but it was badly damaged by storms. With that support the outcome may have been different. But Charles also ignored his general’s advice and made a disastrous military error.

In defeat Bonnie Prince Charlie fled to the highlands where Flora MacDonald saved him from pursuers by dressing him as a maid and taking him by boat to Skye. Eventually he made his way back to Italy, but became a broken man and fell into alcoholism. He died in Rome in 1788.