Home➤ News & Events➤ Blog➤ The Stone of Who?
BECOME A LORD OR A LADY NOW

The Stone of Who? 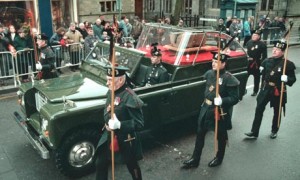 The stone of Scone coming back to Scotland in 1996.

The stone of Destiny, on which the ancient Gaelic kings were crowned, was named ‘Scone’ (pronounced ‘skoon’) after the abbey where it was kept for centuries, until 1296, when it was stolen by Edward I.

It is alleged to have been Jacob’s pillow stone when he had the dream about the ladder of angels. Because of his vision, Jacob consecrated the stone to God. Then presumably lugged the heavy thing back to town, and passed it on to his entourage, descendants, assorted high priests of Judeo-Christian extraction, as a kind of holy relic.

Legend has it that St Jerome brought it to Ireland. Another legend says that St Columba took it to Scotland. These legends have been slightly confused with the Lia Fáil, or Irish stone of Destiny which still stands at Tara, where the Irish Kings were crowned. 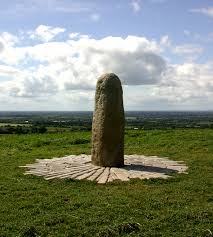 Lia Fáil, the Irish stone of Destiny, at the Hill of Tara, County Meath.

Whatever way it got itself to the British Isles our monarchs have slavered over it like hungry hounds ever since.

British Israelism is a movement that believes the British royal Family is directly descended from the line of King David, and therefore Jacob, who had 12 sons, one of whom (Judah) begot David. The evidence for the royal family connection has been refuted by almost every relevant school of discipline you care to mention, however there are some in conservative corners of society who steadfastly cling to this notion. I suppose it lends legitimacy to the idea of a royal family, but it is categorically untrue.

it is possible that the reason Edward I (and his lineage) was so interested in obtaining the stone of Scone as part of the spoils of war, has a lot to do with the above notion. Edward I was a king who needed all the legitimacy he could get his hands on. He was also an astute politician who knew the power of symbolism. After the significant loss of most of France by his father, Henry III, and the rebellions of the English Barons, Edward needed to strengthen his Plantagenet authority. Subsequent royal houses have sought that elusive feeling of legitimacy ever since, hence a certain reluctance to give back the stone until the end of the twentieth century. 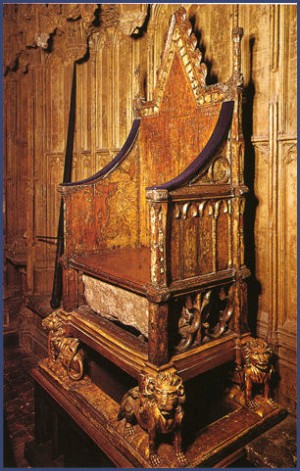 King Edward’s Chair, or the Coronation throne, at Westminster Abbey, with the Stone of Scone inserted.

Our present monarch must be feeling quite secure to have finally given, or rather ‘lent’ the stone back to Scotland. Though it will be snaffled back again to Westminster for the next coronation.

Geologists have had a look at the stone and discovered it to be a lump of red sandstone taken from a local quarry near to Scone. So not Jacob’s pillow then. Other stories have leapt up around this revelation: the abbot of Scone had the real stone hidden and quickly made a replica when he heard Edward’s army was on its way.

English spokespeople refute this of course. Oh no, we believe it’s the real thing, they say. Of course they do. The real thing which broke in half on Christmas day 1950, when some radical Scottish students stole it from Westminster and took it back to Scotland. Something that old, that has travelled that far, would it break in half so easily?

Another doubt on its authenticity is cast by ancient chroniclers, who describe a marble-like stone that was the height of a seat on which the Kings would sit to be crowned. Moreover this marble stone was elaborately engraved according to legend. Doesn’t this make sense to you, to engrave a piece of quality hard stone for your monarchs to be crowned on? Not sandstone. Sandstone from a Scone quarry with some chisel marks on it doesn’t sound right at all. It sounds like a Scottish last laugh of a very lasting variety.

A sketch of the stone of Destiny based on ancient descriptions, from ‘Nigel Tranter’s Scotland’, Richard Drew Publishing, Glasgow:1981

So, if it’s true, and the stone of Scone is a fake, then where on Earth is the real stone? Well, there are stories about this too. Some say the monks hid the real thing in Dunsinane Hill.

A report in the Morning Chronicle, dated 1819 talks of an extraordinary stone found during some excavations of the site of Macbeth’s castle at Dunsinane. It was allegedly engraved with markings and found to be meteorite in origin. A hard stone indeed. A stone that ancients could easy describe as marble. But where did it go? The report said it was taken to London to be tested by ‘scientific amateurs’. Beyond that the trail goes cold. Was that stone a fake too? The whole story sounds a bit iffy. If it was real surely we’d know about it.

Or is that a double bluff – it is real, and therefore had to be kept under lock and key to spare the embarrassment of the monarch. George III may have had his reasons. He was a despised ruler. Shelley’s incendiary poem entitled ‘England in 1819’ sums up the mood of the day. It begins:

“An old, mad, blind, despised and dying king,
Princes, the dregs of their dull race, who flow
Through public scorn, – mud from a muddy spring, –
Rulers who neither see, nor feel, nor know,
But leech-like to their fainting country cling,”
(Percy Bysshe Shelley, 1819)

If it had come to light the House of Hanover was crowned on a lump of worthless red sandstone, what effect would that have had on the discontented English subjects? The French revolution of thirty years before still pained the memory. The smallest of sparks around such tinderbox conditions had to be avoided.

So perhaps, just perhaps, somewhere in the bowels of the British Museum Archives, under layers of dusty cloth, there is an elaborately carved piece of meteorite with a long forgotten history. 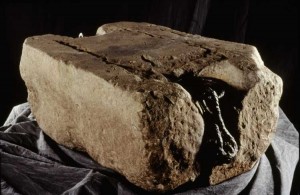 The alleged Stone of Destiny

History
House Of Stewart – The Monarchs Of Scotland »
General, History, Uncategorised
Ballachulish and the Appin Murder »