Welcome back to our occasional series on trees of Scotland. Today we look at the larch, a non-native from Northern Europe which came to be naturalised in the Scottish landscape. 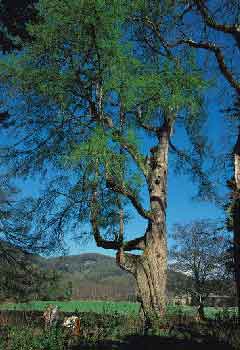 Near Dunkeld Cathedral there is a 275 year old larch tree, the last remaining survivor of a group of five, introduced into Scotland in 1738. The duke of Atholl brought the seedling trees over from the Austrian Tyrol and planted them on his estate.

Then began a mission which stretched through generations of Atholl dukes. The seeds of these trees begat some 14 million larch trees that were planted by successive Dukes for over a century. These larches covered 10,500 acres of hilly ground that had been washed by rain and were useless for farming. The trees stabilised the ground and provided a habitat for wildlife which is still thriving today. 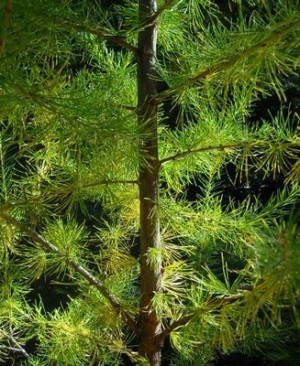 Larch tree close up, showing their distinctive clusters of needles.

Larch wood is immensely durable, and has rot-proof qualities that make it great for marine uses. The Royal Navy first used a consignment of the Duke’s larch in 1816 to build HMS Atholl, part of a fleet of post-ships (small frigates). It proved to be a worthy ship, out-performing its sister ship, HMS Neimen, which was made using Baltic Fir. Although no pictures are available of HMS Atholl now, HMS Rattlesnake, a model in the same class, still survives in a painting, to give you an idea of what it would have looked like.

The larch is a conifer, but in autumn its needles turn a golden yellow and shed for the winter. Because of this foresters call it the ‘honorary broadleaf’. It’s a member of the Pinaceae family (pines), and evolved in the boreal forests, also called ‘Snow forests’ of Northern Europe and Russia, so a bit of Scottish weather is a breeze to a Larch! 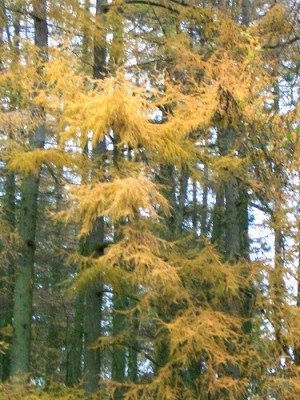 The tree canopy provides a light shade on a forest floor which is suitable for deer and capercaillie. Larch seeds are eaten by red squirrels and several species of bird including the siskin, treecreeper and redwing. Black grouse are fond of young cones and buds, and many species of moths hatch their larvae on the nutritious leaves. The sparrowhawk and the goshawk both favour the larch for nest building.

Unfortunately Scottish larch trees have a new enemy. Phytophthora ramorum (also known as Sudden oak death) is a fungal disease which kills both larch and oak. The fungus is spread by airborne spores and is deadly with no known cure. The only thing foresters can do when encountering an outbreak is to fell infected trees as soon as possible to stop the fungus spreading. In recent years it has been discovered in Britain. Foresters felled 4000 tonnes of larch wood in Wales last year in an attempt to stop an outbreak spreading there.

This disease is a great concern for foresters especially on top of the outbreak of ash die-back. The good news is those Welsh larches are being replaced with 13,000 young oaks and other native trees, to reinstate a more ancient forest that had once existed there, turning a crisis into an opportunity. The larch wood will be used to make bird-hides and sculptures to complement the new oak forest.

Highland Titles Nature Reserve has several acres of larch, including one very old stand of trees by the Salachan burn. Thankfully they are all very healthy and our volunteers keep a careful eye on them.

Incidently the larches of Larchmont, New York, which inspired the name, were grown from seeds sent over from Scotland. The original Larchmont trees are around 200 years old. 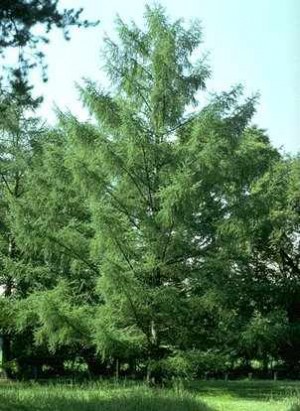 In ancient European tradition the wood of the larch was ritualistically burned to protect against evil spirits. How effective this practice was is unknown at this time. Evil spirits have either become extremely scarce, or they have grown so numerous we can no longer distinguish them from any other reality.

Better burn some larch twigs. Or better still, just soak your whole self in a bathtub made of larch 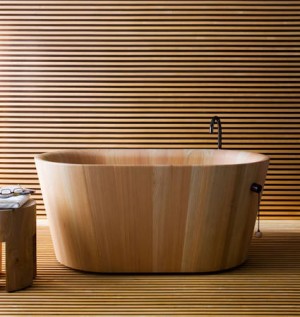