One of the more common trees you’ll find in our Scottish woodland is the ancient Sallow, (Salix caprea) commonly known as Goat Willow or Pussy Willow . Like Alder, Sallow is another pioneer tree that has been around since the beginning of civilisation and long before. 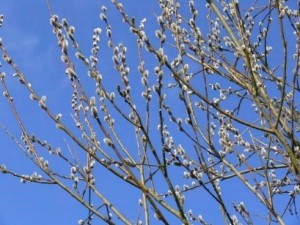 The Salix or Willow genus is a huge cornucopia of trees and shrubs. Natives to Scotland include Goat Willow, which we are exploring in this article, but also Grey Willow, Eared Willow (more shrub than tree), White Willow, Osier (which is also a willow), Bay Willow, Purple Willow, and the list goes on.

The famous Weeping Willow (Salix x sepulchralis) is not British at all, but a hybrid descended from Chinese parentage. However a native species of Willow, or Sallow as our ancestors called it, has been around since the beginning of the Wildwood which sprang up before Man came along to coppice it (about 8000BC). In fact Sallow is thought by some to be one of three original tree species which first grew up in the prehistoric Wildwood, along with Birch and Hazel.

Problems in tree classification arise because Willows have male and female catkins on different trees and these are telecasted during pollination producing all sorts of hybrids.

The ancient Sallow, as far as we can tell, is the same as the Goat Willow (Salix Caprea), which, along with the closely related Grey Willow (Salix Cinerea), is also called Pussy Willow, as both produce similar catkins along their branches which are soft and furry. To add to confusion the Goat Willow often hybridises with the Grey Willow to produce something in between. But you can with confident authority still call that hybrid creation a Sallow. Luckily for us the Sallow is the commonest of our native willows and grows everywhere, so if you go looking you are bound to crash into one before long!

Sallow leaves are oval,with wavy margins and a pointed tip. This is unusual for a Willow, which normally has the long thin leaves of the Grey Willow and others. The leaf undersides are lighter and hairy, and at the base of each leaf stalk you will see little stipules, or leaflets. 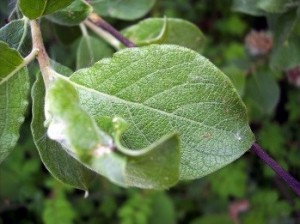 The female catkins appear first in January or February and are silvery grey. Budding along the bare sticks they have long been associated with the coming of spring. Male catkins follow in March and are golden coloured. 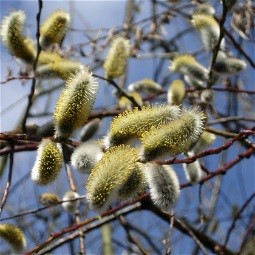 The bark begins greenish-brown and smooth, and becomes dark brown with age. Like other Salix, Sallow bark contains a watery sap full of bitter tasting Salicin. Metamorphosed by the body as Salicylic acid, it becomes an anti-inflammatory that reduces fevers and rheumatism and gives pain relief. Today we synthesise it as Aspirin. Back in the day we steeped a spoonful of powdered Sallow bark in water for a couple of days then boiled it. Aspirin is a lot quicker!

Sallow grows up to 12 meters, prefers a moist soil, and lives between 150 and 300 years. They coppice readily, and have been part of coppiced underwood since records began. Evidence of Sallow wood can be found in the wattles of ancient houses, where they were weaved together to form the skeleton of the walls before the daub was plastered over them. Often pieces of wattle were tied together with withies (one year old willow shoots). Sallow was also used for charcoal and fencing, and withy, like rope, had countless binding purposes.

The words Sallow and Withy have contributed over time to many ancient place names. Nicholas Culpeper says in his 1653 volume The Complete Herbal, that “The moon owns the willow.” He meant it was associated with the female principle. It has been suggested that the words, witch, wicked and wiccan all originate from the word Willow. The other meaning of sallow, a pale yellowish skin colour, does not come from the same root as the tree (if you’ll forgive the pun), but is more likely related to the Old Norse word for yellow.

The old English folk song “All Around My Hat I Will Wear the Green Willow”, refers to an old belief that willow, which bends without breaking, was a supportive talisman. It reminded us that we could grieve deeply and come safely through to acceptance without shattering under the weight of grief. The Willow has long been associated with death and mourning, and symbolically features in the description of Ophelia’s death in Shakespeare’s Hamlet. Gertrude begins haltingly, “There is a willow grows aslant a brook…” and who can forget (or remember) Desdemona in Othello singing “Willow willow” as she fears for her own imminent demise at the hands of her jealous husband. 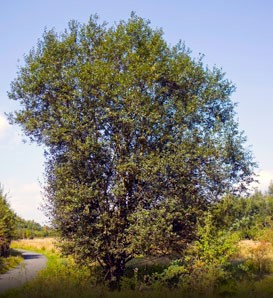 A Sallow or Goat Willow Tree