“The best time to plant a tree was 20 years ago. The next best time is now.” ~Chinese Proverb

In this article we will examine the elegant Silver birch (Betula pendula), a native tree of Scotland which is well represented in Glencoe Wood Nature Reserve. In America it is known as White Birch.

It is thought the name Silver birch was first coined by Alfred Lord Tennyson. The Latin name, Pendula was given to it because the spray becomes pendulous, turning downwards as the tree matures. 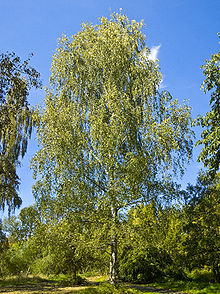 The only other species of birch found in Scotland is Betula pubescens, or Downy Birch, a very similar and closely related tree. They are often confused, but the Downy birch has a greyer bark as opposed to the papery white bark that distinguishes the Silver birch.

In Glencoe Wood Nature Reserve all our birches are of the silver variety.

Silver birch is one of the oldest native species we have in Scotland. It has been around since the earliest wildwood. Like their close relation, the alder, silver birch would have been among the first to re-colonise the landscape after the last ice-age, as they are able to thrive in the most forbidding of landscapes.

One of their strengths is that birch roots travel very deep underground finding and extracting essential nutrients, which then enrich the top soil as they shed their leaves. Because of this they are classed as a ‘pioneer species’.

Silver birch is one of our easiest species to identify. Its distinctive silvery bark has dark grey lenticels – the horizontal lines around the trunk – etched into it. It is one of the first to produce leaves in spring, hence its adoption by Celtic peoples as a tree of fertility.

In pre-Christian times the Beltane fires that burned ritualistically during the spring equinox were often made of birch and oak with birch symbolising fertility and renewal. Our Celtic ancestors revered the birch as a symbol of purification as well. Birch besoms were used by witches in their shamanic ‘flights,’ and gardeners used birch besoms to purify their gardens by sweeping up the old leaves. 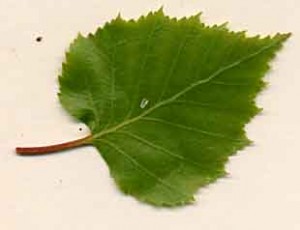 Birch leaves have similar serrations along the edge as Alder leaves, and being of the same family, Betulaceae, that’s not surprising, but the Birch leaf is triangular, whereas the Alder is heart-shaped.

The old Gaelic word for birch is Beith, (pronounced ‘bey’) derivatives of which you will find in many Scottish place names. There is even a town called Beith in Ayrshire, which used to be called Hill o’ Beith, meaning Hill of the birch trees, a name which echoes from a time when the area was still covered by woodland.

Each of the eighteen letters in the Gaelic alphabet is named for a tree or shrub, and B is represented by beith, or the birch tree, which shows how deep the roots of the birch tree run in our Scottish heritage.

This is extraordinary for a species that only lives about 80 years, pretty short-lived for a tree. If you coppice a birch tree within the first few years of its life it can live much longer.

Birch was not the most effective or widely coppiced wood, but it was often coppiced for faggots or brushwood, and of course the iniquitous birch rod, an implement of torture feared by British school children since the 15th century.

The saying ‘spare the rod and spoil the child’ referred to the judicial use of the birch rod in the home. It was not a single stick, but a bundle of birch twigs lashed together like a miniature besom and soaked in heavily salted brine. This gave an extra sting while disinfecting the broken skin at the same time. They really thought of everything! In fact its primary use was for sweeping up dust before feather dusters made life easier.

Birching was a common punishment for prisoners too. The prisoner would be publicly thwacked against his bare buttocks, until the wounds swam with blood. The last recorded use of the birch rod on prisoners was in 1976, in the Isle of Man. In Victorian times it was considered a healthy practise for men to birch their wives for minor derelictions of duty in the home.

In Finland, where the Silver birch is the national tree, they make a similar device out of birch twigs, but call it a sauna whisk, and use it to hit, not each other, but themselves while taking a sauna!

Barring all this sado-masochistic behaviour, birch wood, being plentiful in Scotland, became extremely useful to Scottish daily life. So useful was the birch tree that J.C. Loudon wrote in his 1842 Encyclopedia of Trees and Shrubs: ‘The Highlanders of Scotland make everything [out] of it’.

Its uses ranged from building material, to household furniture, broom handles, bobbins, paper-making, toys and agricultural tools. It also made a good fuel, especially in the distillation of whisky, or for smoking hams and herrings. In the smoking industry birch was the preferred wood. That must be why Scottish kippers were always the best in the world!

The silver birch’s usefulness doesn’t end with the timber. Its bark was traditionally used for tanning leather, the spray for thatching and bedding, and the sap fermented into Birch wine. Silver birch wine is still produced by Highland Wineries in Inverness, a crisp and fruity summer wine much sought after by aficionados. 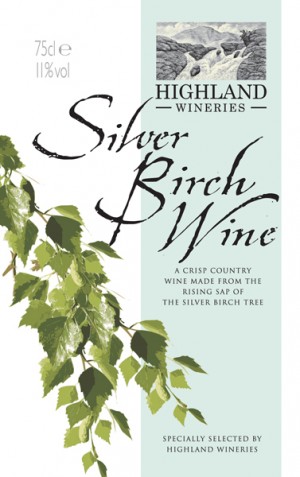 In traditional medicine Birch has several uses. Its bark can be used to treat skin conditions such as warts and eczema. Although the research is still young, scientists have now discovered in birch bark two chemicals that can kill cancer cells with no side effects. These are named Butalin and botulinic acid. Scientists have high hopes for these chemicals in the fight against cancer.

One of silver birches’ greatest predators is the Birch Bracket fungus. It is a necrotrophic parasite – which means it preys on weakened trees. It can live in a crevice in the silver birch’s bark, and lie dormant for years until something happens to weaken the tree’s defense mechanisms, at which point it begins to produce fruiting bodies.

Eventually it will bring about brown rot in the tree and kill it. So if you see Birch Bracket on a silver birch trunk you know the tree is on its way out. 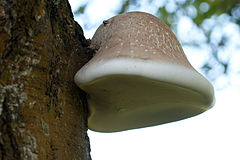 As an edible mushroom it has a nice mushroomy smell, but a rather bitter taste. In days gone by its soft cut underbelly was widely used by barbers to sharpen razors, hence its other name: Razor Strop. The 5000 year old mummy found in the Tyrol, known as Ötzi the Iceman, was carrying a piece of this fungus in a leather pouch. Perhaps he was going to eat it for his dinner.

Some products from our online shop

The most famous birches in Scotland are the Birks of Aberfeldy that cloak the glen south of the small market town of Aberfeldy in Perth and Kinross. Robert Burns made them famous when he visited them in 1787. He was so impressed with their natural beauty he was inspired to write a poem.

“Now simmer blinks of flow’ry braes,
And o’er the crystal streamlets plays,
Come let us spend the lightsome days
In the birks of Aberfeldy!”

Since then the paths through the Birks of Aberfeldy have been enjoyed by walkers for 200 years and become internationally famous. 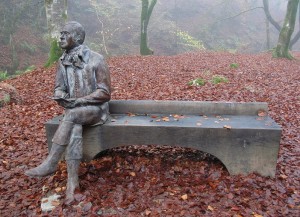 Robert Burns Statue among the Birks of Aberfeldy