Welcome back to our occasional series on the native trees of Scotland. Today we explore the Common Ash, a beautiful tree that is suffering now and in need of our best attention. 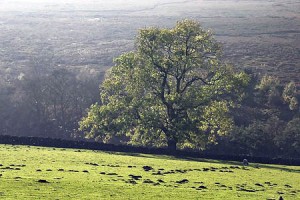 Ash tree in the Scottish landscape

The Ash tree,’s Latin name is Fraxinus excelsior. Some think we call it the ash tree because the bark is ash-coloured. The trunk is grey and smooth when young, but becomes fissured with age, often into unmistakable diamond-shaped ridges.

Their crowns have what is known as an open irregular shape. Which means they grow as the fancy takes them, thrusting out their larger branches in no particular order. In winter their naked shape presents a dramatic silhouette against the sky, especially pleasing to artists such as Constable, who made many studies of Fraxinus excelsior. This is one of them 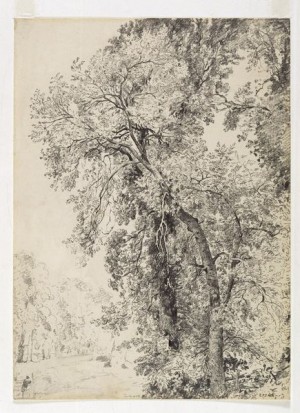 Here are two ways of knowing for sure you are looking at an ash tree. One: their leaves. They have ‘compound leaves’, which consist of 7-9 leaflets springing from a single bud, comme ça: 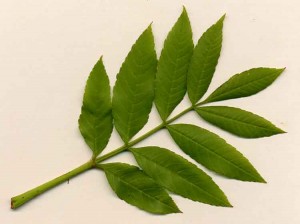 But don’t mistake it for a Rowan (also known as Mountain ash). This is not the same family at all. 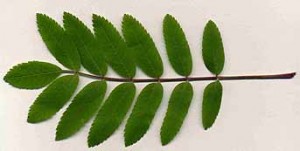 Two: Opposite branching. The smaller branches of an grow in divergent pairs. This is known to botanists as ‘Opposite branching’. It shares this trait with the maple and the horse chestnut. Unless the tree has lost a twig or two you will invariably find this structure. 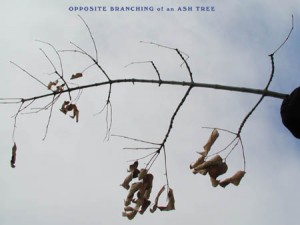 In autumn we also find the key or spinner (properly called samara) of the ash tree, that spins in the wind as it falls. It is aerodynamically designed to spin sideways from the tree. Nature is awfully clever. In the early days of aeronautics, those magnificent men looked at samaras to get ideas for their flying machines. 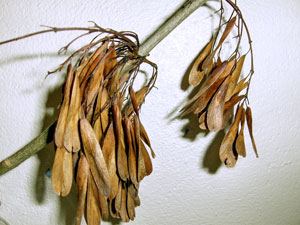 The ash is one of the first trees to shed its leaves in autumn and among the last to unfurl them in spring. The leaves tend not to turn red, but fall when they are still green. In the woodland their light green leaves offset the autumnal colours of other trees to great effect.

Ash wood is very hard, but it has an elasticity that makes it particularly durable and impact resistant. So it makes good handles for hammers and axes, and is used for many other items from tennis racquets to chairs. Going further back the Vikings made their spear shafts and load-bearing items such as bed slats and chariot axles from ash. When there were no yew trees available, ash made excellent bows and arrows too. It’s so versatile it was widely coppiced in Britain right up until the Second World War. 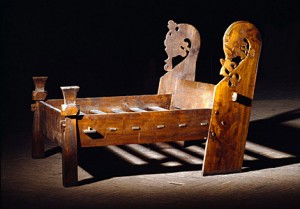 In Norse mythology, Yggdrasil, the tree of life, was said to be an ash tree. It lived in the middle of Asgard, the godly kingdom where Valhalla was located. Odin fashioned the first human males out of ash logs. So the Viking connection to this tree runs deep. The mythology says that when the ash tree dies the end of the world will come.

Let’s hope the Vikings are wrong as these beautiful trees are threatened by the monstrous plague of ‘ash die-back’. Tree experts are doing everything they can to combat the fungus (Chalara fraxinea) and there is a glimmer of hope. Some strains of European ash are found to be resistant, and from these perhaps a solution can be found before it is too late. Clever minds are working on it.

In the meantime there is a ban on imports of tree saplings. There is little doubt though that Chalara will have an impact on the 80 million ash trees in the British landscape almost as devastating as Dutch elm disease did in the 1970s. On a positive note, all is not completely lost. Resistant saplings are already being tested in the British Isles with a view to filling in the gaps in the landscape as other trees succumb.

Normally these trees reach a girth of around 15 feet in diameter, and grow to about 100 feet high. The tallest ash ever recorded was 150 feet. Left alone they will live between 200 and 250 years, though coppicing will increase that lifespan to as much as 700 years. The largest ash tree in Britain is the Clapton Ash. Its girth is 29 feet, which is most unusual for an ash tree. For reasons unknown it developed an incredibly bulbous bottom! 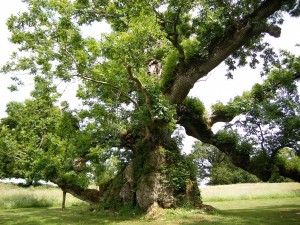 The Clapton Ash (in a private garden near Crewkerne)

According to the Celtic tree calendar phase of the ash moon is between 18th February to 17th March. The ash is associated with inner spiritual journeys and prophetic dreams. So that is the time to be having some of those if you’re willing. While we’re at it let’s prophecy the triumphant resurgence of the ash trees someday even as we mourn their loss now. 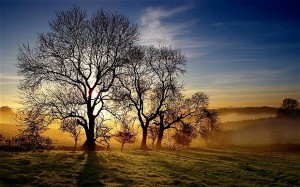 Find out more about Species of Ash tree here