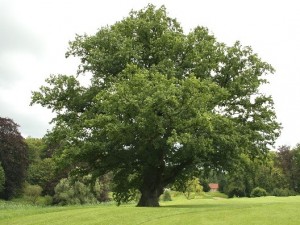 The word ‘Druid’ is derived from an original Gaelic word meaning “men of the oak”. This is because they revered the oak tree as a sacred being. Long before churches were built, oak tree groves provided a cathedral-like space where those long-dead cloakéd ones observed their rituals. It was from trees that cathedrals got their ideas, not the other way round. One should say that cathedrals are ‘tree-like’ in their numinousness. (I love that word – in case you’re wondering it means seeming to have divine presence).

Oaks, for some reason, tend to get struck by lightning more than any other tree. It could be because they are often the tallest object in the landscape, but the wood of the oak does have a low impedance to electrical current. In other words it’s a natural lightning rod. Ancient civilisations associated the oak with the gods of thunder: Jupiter, Zeus, and others. Mistletoe often grows on oak tree branches and it was once believed that God put it there during thunder storms. Well you would wouldn’t you, if you were God, just for the crack (if you’ll excuse the pun).

So how do you tell the difference between a pedunculate oak (also known as Old English) and a sessile oak (also known as Welsh or Cornish). It’s marvellously easy, just look at the acorn stalks. The sessile oak (Quercus petraea) is so named because sessile means “sitting”. The acorns sit on the twigs. The pedunculate (Quercus robur) have acorns with stalks. Peduncle, as all you botanists will know, means stalk. 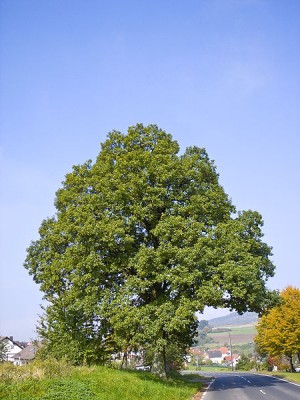 The botanical term Petraea means ‘of rocky places’, and the sessile oak prefers an upland landscape with shallow sandy soils. The pedunculate is more likely to be found in the richer deeper soils of fertile valleys and plains.

The leaves look the same but the sessile oak leaves have longer stalks while the pedunculate oak leaves have barely any stalk – because they gave the stalks to their acorns of course. The other difference lies in the trunks of both trees. Pedunculate oaks tend to grow very slowly, living longer and over time producing bulbous and knotted trunks. These can grow to enormous widths. In every other way the two varieties are so genetically similar they can cross-fertilise producing hybrids with elements of both.

King Arthur’s round table which hangs in Winchester’s Great Hall is made from a single cross-sectional cutting of an oak tree-trunk. It is 18 feet in diameter. It’s not really Arthur’s table though, that myth has been busted. Carbon dating puts it around 1290. It is thought to have been carved for a royal tournament hosted by Edward I, who liked to cut himself an Arthurian-style jib.

At 18 feet in diameter an oak tree could become a room, and that is precisely what happened to an oak tree in Bowthorpe, Lincolnshire. Thought today to be somewhere between 600 and 1000 years old, it was already very old and in a state of long remembered hollowness in 1768, when the Squire of Bowthorpe decided to host a dinner party in its interior.

The insides were smoothed out to make room for 20 guests. The room measures 9 x 6 feet, so it must have been a bit of a squash. A door that was cut out for an entrance has grown over in the last 250 years and looks more like a crack now. In his book ‘Meetings with Remarkable Trees, Thomas Pakenham writes that the tree “caught my breath. It seemed to fill the field.” 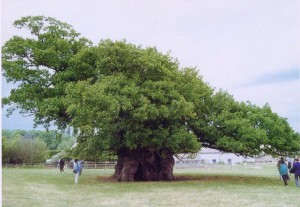 Today it still thrives, the outside growing ever thicker, and receives top billing as the largest oak tree in Europe. Well worth a visit if ever you are in Lincolnshire. It will still be there, photosynthesising quietly, after all our hearts have stopped beating.

Long go in the early days of Christianity, and perhaps echoing a much earlier tradition, parishioners used to “beat the bounds” every year, a ritual procession around the perimeter of parish land, walking between landmarks – trees and standing stones – which marked the boundaries. This helped everyone to remember exactly where their boundaries lay and there were no arguments.

It was customary to stop at the landmarks to give thanks, blessings and readings from the bible. No doubt picnics were involved. Oak trees were targeted as appropriate places for the bible readings and began to be known in many areas as the ‘gospel oaks’.

The area known as Gospel Oak in North London had just such a tree for centuries. It marked the boundary between Hampstead and St Pancras, and it must have been a fine specimen, because by the 1700s its fame had caused the original name for the parish, South End Green, to be usurped.

Perhaps this was partly due to the arrival of the founder of Methodism, John Welsey, who would often preach to a flock of farmers beneath its boughs. The original oak tree of Gospel Oak disappeared sometime after 1801, when housing development arrived with the new railway. It may have died. It was already over 800 years old by then, but its name lives on.

The oak is part of the British collective psyche. Every one lays claim to it – from the pride of ancient Scottish oakwoods to the national tree of both Wales and Cornwall – a symbol of longevity and stability. Let’s not forget the Royal Oak which hid Charles II from the Parliamentarians, giving its name in perpetuity to English pubs up and down the land. That very oak, in Boscobel Wood, was destroyed by its own fame. 17th and 18th century tourists used to chop off limbs for souvenirs.

A spray of oak leaves was engraved on all our old sixpences and shillings before it was replaced with the British lion. It might have been more appropriate to keep the leaves. We struggle to find some actual lions around here, we just keep bumping into oak trees. 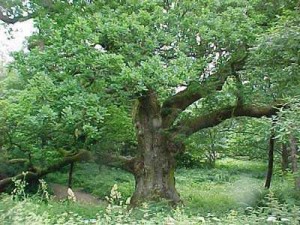 The Birnam Oak, an ancient Sessile oak on the south bank of the river Tay in Perthshire. Thought to be a relic of Birnam wood, and immortalised in the story of ‘Macbeth’.