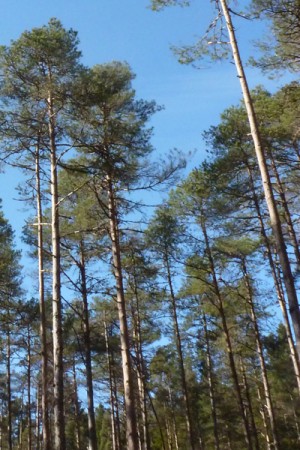 This is the king of Scottish trees! In 2014 the Scots Pine was declared the national tree of Scotland, and with good reason. It is the only pine native to the country. It manages to flourish in the most forbidding of climates, clinging to the windy sides of mountains. It survives in conditions that most flowering plants couldn’t abide. Strangely enough though, on good soils and in moderate climates it doesn’t do so well in the race for life and is quickly overrun by the angiosperms (flowering plants and trees).

Scots pine belongs to the conifers, a separate group of plants which don’t ‘flower’ so much as produce a cone. The conifer is an evolutionary brainwave that hails from the Triassic period of evolution, long before the beginning of angiosperms and even before the dinosaurs. We’re not saying the Scots Pine is that old, there were many more species of conifer that preceded it and from which it eventually sprang, but the Scots pine has been around at least 8000 years to our certain knowledge, and perhaps much longer still.

Recent research has shown that in Britain the Scots pine may have invaded a remote North West corner of Scotland from Ireland, and moved as far South as favourable conditions would allow. This was before the sea had risen to its present level, and there was nothing to stop a forest’s insatiable march from region to region in what are now quaintly considered to be countries. 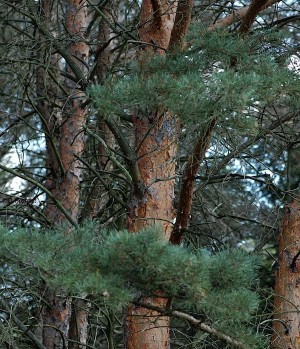 However let’s get back to basics: how to identify a Scots pine from all those impostor pines. Unfortunately a young Scots pine looks like any other pine, but as it matures it takes on some distinguishing features. The bark is the best indicator. At its base the bark is brownish grey and becomes fissured into ‘plates’ with age. It has the added singularity of being quite spongy to the touch. Further up the trunk you get a distinctly reddish colour to the bark and branches. The trunk is long and straight, often growing much higher than other species of pine, up to a dizzying 36 meters, and can be rounded or flat on top.

The needles grow in pairs as part of a larger cluster on the ends of twigs, and each needle grows slightly twisted. Set back from the tips of the twigs are the male cones, brown, spherical and tightly clustered. The female cones grow right at the ends of the twigs in the higher, more exposed branches, while the males cluster below. 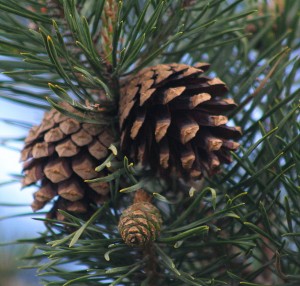 You might think pollination is a hit and miss affair and you’d be right. Pollination is by wind. When the fertilized female cones are about 2 years old they open while still on the branch and let the wind take their seeds. So you find old open cones still on the branches of the Scots pine that have dispersed their seed in the last season, as well as young budding cones. 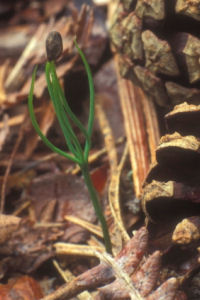 Each seed is tiny, two hundredths of a gram, with a little wing to help it fly. It’s incredible to think that a seed that tiny will one day grow into something so mind-bogglingly tall. Seeds need light to grow and mustn’t fall in the shade of the parent tree. This is where the wind helps, to carry them at least 50 meters away onto sunnier ground.

Although the chances of an individual seed growing into a tree is slim, there are so many of them – millions of seeds in a good year – that the odds become favourable. With this strategy it is easy to see how, given a few millennia, a forest can ‘travel’ vast distances. As Colin Tudge wrote in his remarkable book ‘The Secret Life of Trees’ if we could take a time lapse photograph of the last 10,000 years we would see great forests “flitting over the globe like the shadows of clouds.” 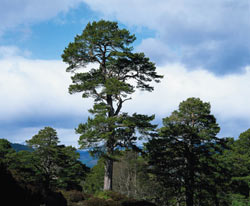 They are a long lived species. A 700 year old Scots pine has been found in Norway. We don’t really know how old the oldest one in Scotland is, as our puny life span and lack of forward planning means we haven’t kept track, and older ones may yet be discovered. The oldest trees found so far are around 550 years old. Their actual whereabouts is a closely guarded secret to protect their great age from the foolishness of some humans.

Scots pine is known as a “key species”. This means that, like the oak, it provides a habitat for many other flora and fauna to thrive. You can read more about the flora of the pine forest and how they live in harmony with this beneficial tree in some of our other blog posts.