Yew is a common name given to any of the collection of various coniferous trees and shrubs in the genus Taxus.

Yew trees live so long they leave other trees standing. A 500 hundred year old oak is a mere baby compared to some yews, and as for the ash or the birch, yews might zone out for a moment and miss their entire lifecycle.

Ancient, morbid, toxic. The yew is one of the longest-lived native species in Europe. This has made it a symbol of death and doom, but it provides food and shelter for woodland animals.

The oldest yew tree in the British Isles belongs to Scotland. It’s the Fortingall Yew in Glen Lyon – possibly the oldest tree in the world. It is thought to be somewhere around 5000 years old, though estimates put it both younger (2000) and older (7000!). Now that’s old. 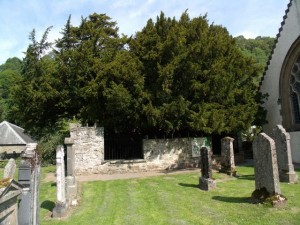 The Fortingall Yew – so old they built a wall around it to provide sheltered accommodation.

The second oldest yew tree is in Scotland too, it is the famous Dundonnel yew, which lies a few miles south of Ullapool, which could be dated at around 2,000 years old. 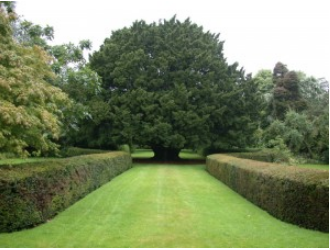 The trouble with dating yews is that once they are established they tend to have many ‘resting’ years when they just don’t grow. Also as a yew tree ages it becomes hollowed out in the middle making it impossible to count the tree rings. Any aging of a yew tree, especially one as old as the Fortingall Yew, is a matter of conjecture and hopefully some helpful parish records. Unfortunately this tree pre-dates the parish. It pre-dates the Romans for goodness sake.

Many reasons get cited for the presence of yews in churchyards. One is that they are poisonous to livestock. (Livestock don’t graze in churchyards). Another is to do with providing wood for longbows. Actually the few remaining yews in churchyards exist despite this fact because they grew on sacred ground and couldn’t be felled for commercial purposes. Yew wood for longbows was obtained from the ancient yew forests of Europe, which were felled to near extinction by the end of the 16th century.

Since many of the yew trees you find in churchyards pre-date the churches, it’s fair to say the association between yew trees and sacred spaces goes further back than Christianity. The Druids believed the yew transcended death. In fact they named it the tree of death, a gatekeeper between this world and the next. It’s likely the first churches were built on much older sacred sites that venerated one or more yew trees, and the early Christians appropriated their symbology.

Yews can transcend death, it’s true. Mature trees eventually bend their branches to the ground where they take root and form a new tree. This process is called ‘layering’ and the Great Yew at Broich near Kippen, Stirlingshire is doing just that. Whole tangled forests can grow up like this if left undisturbed for centuries. 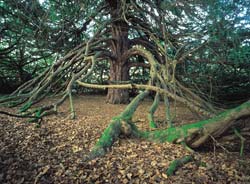 The natural inner chamber produced by all the bending branches is a serene space to spend some quiet time. When you consider how old the tree is (somewhere between 600 and 1000 years), you feel you are in the presence of greatness. It’s easy to understand why the Druids would venerate these trees.

Yet yew trees do die in extreme cases. The famous 1400 year old Selborne yew was blown down in a great storm in 1990. Its huge trunk was hauled up and put back in the ground. Experts hoped that replanting might help the tree regenerate. This has been known to happen. But after six months the stump still showed no sign of growth. A small baby yew tree grows now next to the dead stump from a seed dropped by the dying yew, as if the old tree wanted to leave the rescuers something for their pains. 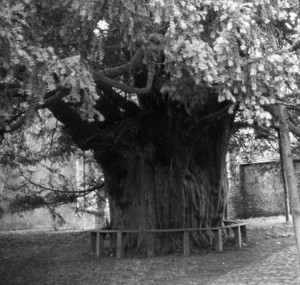 Selborne yew in its former glory (circa 1954)

The staggering age of our oldest yews has inspired the poetry of Wordsworth, Tennyson, Plath and others. Sylvia Plath wrote ‘the message of the yew tree is blackness – blackness and silence.’ Wordsworth agreed, describing his Lorton yew which stood ‘in the midst of its own darkness’. Tennyson, moved by the yew’s proximity to death, wrote ‘Thy fibres net the dreamless head, Thy roots are wrapt about the bones’.

As if these images of blackness and death were not enough to unnerve you, let us tell you about the ‘Bleeding Yew’ in St Brynach’s churchyard, Pembrokeshire. Red sap oozes from a branch of the tree. The sap of the yew is naturally red (weird enough). But why this particular tree ‘bleeds’ perpetually is a mystery. Some say it will stop bleeding when the Welsh have their own monarch again. Others say it is echoing the stigmata of Christ. 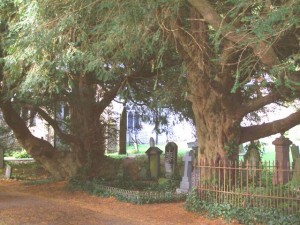 The Bleeding Yew at St Brynach’s, Nevern in Pembrokeshire.

Scientists think there’s a split somewhere deep in the architecture of the tree from which the blood, or rather sap, can’t stop trickling out.

Features of a Yew

You can tell a female yew by its berries – properly called Arils – which grow around the seed: 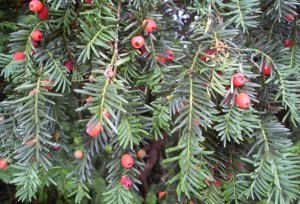 The male tree has tiny cones: 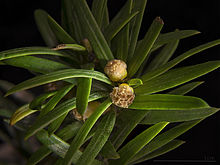 Bark, seeds and leaves are highly poisonous to humans – of course they are, it’s the tree of death! (Ironically the poisonous ingredient, taxane, is used in the treatment of cancer). However the female arils can be eaten and apparently taste lovely, like sweet raspberries. One of our number has tried one and reports the taste is very sweet. If you are tempted to try the arils, make sure you remove the seed first. We don’t want this article blamed for your untimely death!

As mentioned above, many ancient Yew trees are found in churchyards, which can be great places for wildlife to live. The old stone walls and gravestones harbour lichens and mosses, there are lots of trees and hedges to provide food for birds and mammals, and of course their peaceful atmosphere is good for wildlife and people alike. The Wildlife Trusts help local churches to look after the habitats they shelter through a variety of projects.

Yew hedges are great for wildlife beacause they are incredibly dense, offering protection and nesting opportunities for many birds. The goldcrest and firecrest nest in broadleaf woodland with yew understoreys. The fruit is eaten by birds, such as the blackbird, mistle thrush, song thrush and fieldfare; and small mammals, including squirrels and dormice. The leaves are eaten by caterpillars of the satin beauty moth.

Conservation, History, Uncategorised
The Caledonian Forest »
General, Uncategorised
Herbs on the Highland Titles Reserve – A Herbal Tea in the Making? »