We hope you’ve had a great time over Easter. Here at the Reserve, we were not fortunate enough to be visited by the Easter Bunny. Instead, we spotted a lot of exciting Scottish wildlife: from our resident hedgehogs and the usual roe deer to impressive tawny owls and cheeky badgers. With the weather getting warmer, butterflies are out and about and we are busy hosting all the Lairds, Lords and Ladies visiting their plots, but there’s always time to give you a Reserve Update!

While there are now 8 hedgehogs freely living in the wild on the estate, there are still 2 hedgehogs residing in the Forever Home area: Stevie and Sophie. Stevie is the blind hedgehog that will live in the Forever Home permanently, as he is not able to be released in the wild due to his disability, but Sophie is only a temporary resident. Sophie is still underweight, but once she gets to a healthy weight, she will be released and join the other hedgehogs in the wild.

Both residents are doing very well and loving the warm sunny spells. They are generally more active during the night, as they should be, and we often get some lovely footage of their night manoeuvres. Stevie is less particular and if you’re lucky you can spot him out and about during the day.

Closer Look At Our Bee Hives 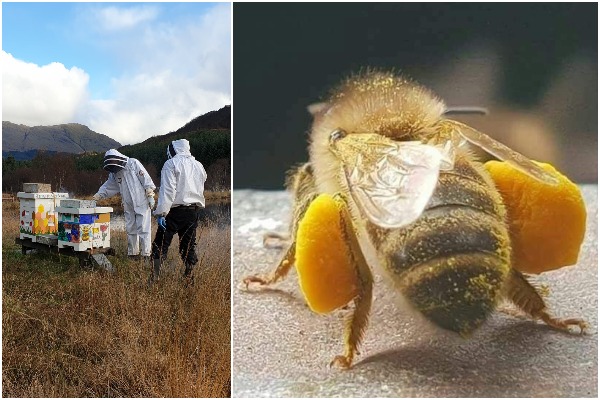 Last week we did another hive check to assess the overall progress of the colonies. Apart from spotting a single varroa mite – which if left untreated could have destroyed the whole colony – our tiny friends look healthy and happy. With the help of Meik, from Webster Honey, we identified a couple of pretty interesting events in some close-up shots of the hives.

The one represented in the image above is known as “pollen boots”. When the bees land in a flower, the pollen is attracted to them like a magnet, sticking to them all over their body. The bees then brush it and stick it to their legs, using a bit of nectar. They later store the pollen in the comb, use it as food for the larvae and as their first protein in the spring. These useful (and fashionable) pollen boots can weigh about 30% of the bee’s weight, so quite the extra load to carry home!

The colour of the pollen reflects the available flowers. Early in the season it’s dandelions and gorse – both yellow flowers, so bright pollen too.

New Touches to the Lairds Lodge

We had our very own Robert at Tulloch busy making some additional bird boxes and, while he was working on wood, he also did some fantastic signs for the Lairds Lodge, which can now be more easily found and is properly identified. We also added some lovely new Highland Titles tartan curtains to the windows. If you want to see these new additions and challenge yourself to a total detox, you can book your stay on AirBnB.

STAY AT THE LAIRDS LODGE

Return of the Canada Geese 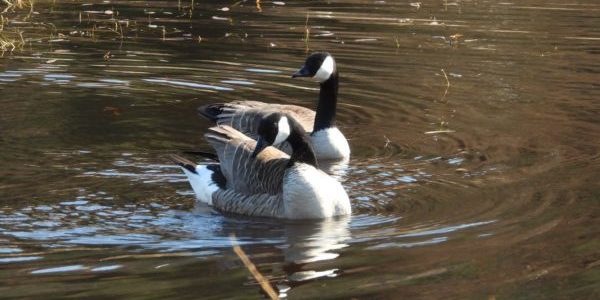 The Canada Geese are back. This is the third year in a row that a couple of Canada Geese have graced us with a visit – and some adorable goslings. In the first year, there were 8 goslings and, in the last season, 6 – so we were crossing our fingers for a successful third visit. And… nesting has begun! This year, in a different spot – which is why it took me so long to see them. We have moved the SpyCam, so hopefully, we’ll have some video next month!

Clip of the Month: Lord Remi, the Bagpipes Player

Usually, it is our job to entertain and educate the Lairds, Lords and Ladies that visit us at the Reserve. However, earlier in the month, it was a nice change to be entertained by Lord Rémi, from France, instead. Enjoy this short clip of the talented Lord Rémi playing the bagpipes.