Update From The Reserve – August 2020

There’s new life in the Reserve! And we don’t only mean the Lords, Ladies and Lairds that have finally restarted visiting their plots and who we are so happy to have around again. Unexpectedly, we became the home for 3 adorable wee ones, from one of the most-loved Scottish species and one of our Community’s favourite residents. If we haven’t piqued your interest yet, please continue reading for an exciting update!

You Gotta Be Kitten Me 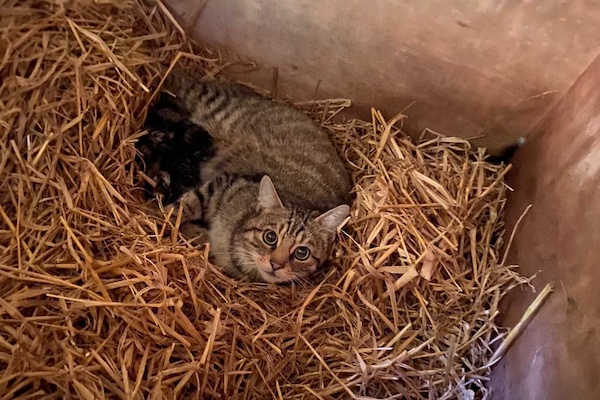 It was mid-August, and it had been 2 days since Stewart had last seen Hope, which isn’t totally abnormal given how large the enclosure is. But, food had been left uneaten, and Stewart couldn’t help but have that horrible sinking feeling that history had repeated itself. Perhaps someone had cut the fence again, and Hope was on the loose? Shannon was quickly recruited and together, they started a hunt of the whole enclosure, paying special attention to the different dens, and when they got to the third den site, there she was. Or rather, there they were! Our own Hope, with three tiny kittens of her own!

Without disturbing her too much, Shannon grabbed a couple of snaps, they equipped the enclosure with 5 SpyCams, and they left some special food for the new mum. Stewart went to check-in on her, this time alone, in a couple of days, but the clearly excellent mother wasn’t too happy and gave Stewart the hiss warning. Not long after, at the next check-up, the den was empty, and Hope was caught on the SpyCam moving the kittens to a new location, one unbeknownst to the humans, where they can’t be spied on.

We estimate the kittens are only a couple of weeks old, and given the gestation period, it is very likely that it all happened during Hope’s last escape. It is still too early to make any decisions on whether the kittens are ferals or Scottish Wildcats, and therefore we don’t have any release or neutering plans thus far. In the meantime, we’ll make sure to keep the kittens safe and sound, the mum comfy and taken care of, and you updated, as always.

A house is not a home, but a habitat box is!

Robert and David, from Tulloch, have been incredibly busy making purpose-built habitat boxes to boost our ever-growing collection, thanks to your continuous support and contribution! The more species we welcome, the more homes we need, so the latest habitat box type developed is meant to accommodate some of the tawny owls released in the Reserve.

With another batch having gone up last week, Stewart attempted to do a count of how many we actually have. His best guess counts 8 squirrel boxes, 4 owl boxes, 6 bug boxes, 6 bat boxes, 15 bird boxes, 17 bug hotels and 6 hedgehog houses – that’s quite the assortment!

Some of you may recall that our Nature Reserve is part of a fantastic cycle path connecting Glencoe to Oban, and whilst some finishing touches were still being added this Summer, our section is completed and already impressing the cycling community. Always Another Adventure on YouTube has made a brilliant video about the route with some superb shots of the Nature Reserve – if you don’t have the time to watch it all, jump in just before the 3-minute mark for the Highland Titles mention.

Cagney and Lacey really have one of the fullest daily routines in the Reserve: eating, rolling about in the mud, playing, getting their bellies patted, eating some more – it’s quite the workday! In all seriousness, our Saddleback / Gloucestershire Old Spot cross piggies have actually done an outstanding job at naturally removing the bracken on their dedicated patch – which is just a nice way to say they have happily trampled it, dug up the roots and even eaten it – and they will be promoted to a new area soon. 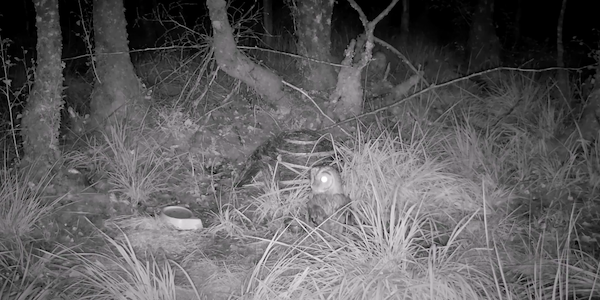 A fox and an owl go to a hedgehog home… could be the beginning of an obscure wildlife joke, but it is simply this month’s SpyCam clip. They were quite the unexpected pair of guests, especially the released tawny owl, which we were surprised to see back in the Reserve so soon after their release.

Conservation, Nature Reserve, Uncategorised
Beekeeping, an interview with Tim Rowe »
News from the estate
Update from the Reserve – July 2018 »