Sir William Wallace, a true hero of Scotland since the 13th century, united the countries clans with his quest for peace and freedom. If you’d like to know more, read on, as in this article we delve into this iconic character and his rich history in great detail.

Let’s start back in July 1296. The sun shone bravely, but dark clouds glowered over Scotland. Their king, John Balliol, stood before the English king. He carried a white rod, the sign of a penitent, he got down on his knees. He pleaded to the king for forgiveness. 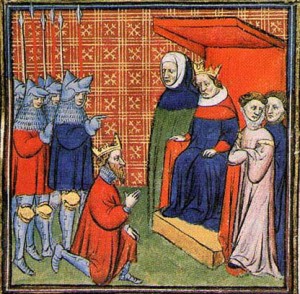 John Balliol kneeling before Edward I

Edward was unmoved. He didn’t believe in compromise. He forced John Balliol to abdicate, and imprisoned him in the Tower of London. After months of insurgence the kingdom of Scotland was finally under Edward’s control.

John Balliol had ruled Scotland for four disastrous years. At first he had capitulated to the English king, to the dismay of his people. Finally he had rebelled, leading a disorderly and doomed war against the English occupation.

Edward confiscated the Stone of Scone, which had supported the bottoms of all Scottish Kings at their crowning, and had it installed at Westminster Abbey, where it would remain for 6 centuries. 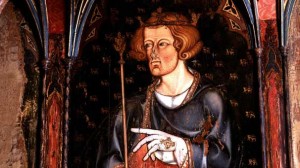 Known as Longshanks, because he was so tall, Edward’s ambition was to rule Scotland directly, without the inconvenience of another monarch. He had bullied them into accepting his feudal superiority. His attacks had included the shocking and bloody massacre of all the women and children of Berwick. Now Scotland was defeated. They had no monarch but Edward I. John Balliol was eventually freed and allowed to live the rest of his days in French exile. He would never return to free his people. Scotland needed a hero.

The son of Sir Malcolm Wallace

Like his son William would prove to the nation in years to come, it is fair to say that Sir Malcolm Wallace was not one to submit.

In 1291 Edward had insisted all Scottish noblemen must add their seal to the infamous ‘Ragman Rolls’ as a mark of allegiance to the Crown. Sir Malcolm Wallace couldn’t bring himself to do it. When his brother-in-law, Sir Reginald De Crauford, who was acting as administrator of the rolls, noticed his brother-in-law’s seal was missing, this was the cue to disappear for a while.

Sir Malcolm, with his eldest son, escaped to Lennox to hide from persecution from the English; meanwhile William’s mother took William and his younger brother to stay with Sir Reginald, who was not about to deny his sister refuge, even if her husband chose to run.

Sir Malcolm’s freedom was short-lived. By December he had been betrayed by his own countryman and murdered by English forces.

So who Was William Wallace?

In 1291, when his father was killed in the skirmish with English troops, William Wallace was still a teenager.

Although there is some contending stories, the historical William Wallace Society believes that William was born in  Elderslie in Renfrewshire. The Wallace surname is believed to be derived from the Old English word wylisc (which is pronounced “wullish”), which means either  “foreigner” or “Welshman”. Whilst this may lead some to believe that the Wallaces were in fact immigrants from Wales, the term at the time was also used to refer to people who used the Cumbric language of Strathclyde kingdom of the Celtic Britons.

As second son of a minor member of the gentry, it was William’s fate to enter the church, and for some years he had been under the guardianship of a paternal uncle, a cleric, to further his education and smooth his entrance into that profession. His uncle was also a follower of politics, a great influence on the young Wallace. He instilled in William the importance of liberty.

Painting of Wallace by the 11th Earl of Buchan

Blind Harry was a Scottish wandering minstrel in the 15th century. Whilst journeying around Scotland he told tales of William Wallace, and is the author of ‘The Actes and Deidis of the Illustre and Vallyeant Campioun Schir William Wallace’, a lengthy poem more commonly referred to these days as ‘The Wallace’. The poem was penned in 1477, around 172 years after Wallace’s death, and it is an in depth account of his life.

Incredibly, his book is the second biggest selling book ever in Scotland, only to have been outsold by the Bible! The work is responsible for giving us much of the detail now believed to be known about Wallace’s early life, but academics say it much be considered critically because there aren’t actually any other sources to back any of the tales up.

Despite some of the more dubious tales contained in his works, it was Blind Harry’s writing that was used as the basis for the popular film “Braveheart”. The poem is still in print today, although to the modern eye it does feel dated, but if it’s something you feel you would be interested in reading, you can find out more about it here. 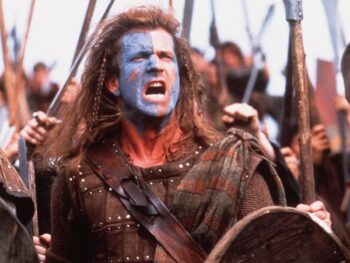 A still from the movie Braveheart, which famously depicts Wallace leading the Scots in the First War of Scottish Independence.

The young William may have already heard about his father’s death when he was walking through the streets of Dundee on a cold December day in 1291. That day changed his life. A young English punk called Selbie, son of the town sheriff, decided to try and get a rise out of him. He taunted William about his clothes. William ignored him. English taunts were an habitual irritation. Selbie raised the stakes and tried to take William’s knife. William flared with rage, drew his knife and dug it into Selbie’s chest.

As Selbie fell at his feet William knew his life was forfeit. From that moment on he was an outlaw. He ran home to his mother, and together the family hatched a plan. Disguising themselves as pilgrims they made their way north to escape detection. The Governor of Dundee wasted no time in putting a ransom on William’s head.

But William couldn’t escape his own temper. At Riccarton, while they were staying with another uncle, William was accosted by four English soldiers who demanded of him the fish he had just caught in a nearby river. William refused, engaged one of the swordsman with his fishing rod, disarmed him, snatched up the soldier’s sword and dispatched him with it. He turned the sword on the other soldiers, killing a second man. The other two fled. William was not a man to be bullied!

His uncle was a bit miffed that William had yet again given in to his rage. He packed him off to another relative who hid him in a wood. Woods were going to become familiar territory to this young outlaw. As his fame grew, he attracted a small band of followers. Some of them were family, cousins and nephews. The woods became his headquarters. He began to lead ambushes against English troops, acting on intelligence he gained from a network of informants. He gained booty from these raids, horses, arms, money. A great resistance movement was underway.

Little is known with certainty of William Wallace before the events of 1297, but he was first mentioned by English contemporary sources as an outlaw, who is reported to have killed the English Sheriff of Lanark, in May 1297.

Wallace’s many triumphs against the so-called ‘invincible’ English troops melted Scottish fear, and gave fresh hope. More people joined him. Edward I was infuriated by news of him. Wallace eventually rose to command an army that would humiliate Edward at the famous Battle of Stirling Bridge. His efforts helped to re-instate Scotland’s king, in the shape of Robert the Bruce.

At Scotland’s time of need, a hero was born.

The stories about Wallace’s early life are mostly apocryphal and all facts are hotly contested by historians. The truth is the life of William Wallace is over time becoming more legend than fact. It is thought too that the legend of Robin Hood is actually based on the life of Wallace.

One quote in particular in relation to William Wallace that is hard to forget comes from 1298, at The Battle of Falkirk, when he is said to have led his troops with the encouraging cry of, “I have brought you to the ring, now dance the best you can!”