Yes you can get blue tooth in the forest!

The Scots pine is the largest and one of the longest-lived trees in the Scottish forest, rivaled only by the oak and yew. As a key species it plays host to many other life forms. The diverse range of fungi that live deep in the pine forest are just some of the many species that rely on this beneficial tree to provide shelter and nutrients. Autumn is the perfect time of year to see some of these popping up out of the ground.

The pine has what botanists call ‘mycorrhizal associations’ with around 200 different species of fungus.

As fungi grow they wrap their threadlike filaments around the root tips of the tree beginning a mycorrhizal exchange of nutrients – sugars from the tree exchanged for Ammonia from the fungi, as they absorb airborne nitrogen and feed it to the tree roots in a more digestible form. Ammonia is vital if the tree is to build plant cells. So both tree and fungus grow better together through this association than they each would on their own. 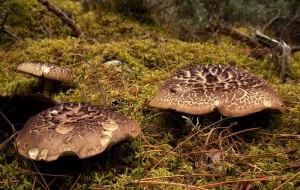 Among the species of fungus which form mycorrhizal associations with the Scots pine are a group called the tooth fungi, all of which occur in native pine forests. These go by some very odd names, the scaly tooth fungus, the drab tooth fungus, and yes – even the blue tooth fungus! Like a big blue molar sticking out of the ground. 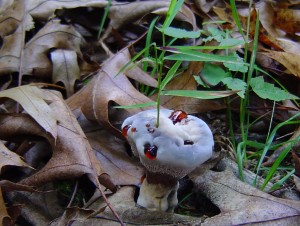 Pine also hosts the extremely rare Green foot tooth fungus. You are most likely to see one of the commoner members of the tooth fungus clan: the wood hedgehog (see below). These are not confined to pine forests but spring up in all sorts of woodland. Also known as Hedgehog mushrooms, they are edible, but don’t take any risks unless you are absolutely sure of what you have. 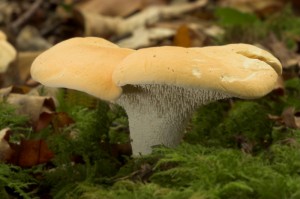 Another edible fungus associated with the pine forest is the chanterelle. Also called the girolle, it has an unmistakable golden colour and ridged undersides, and if you bend down and have a sniff it smells a bit like apricots. 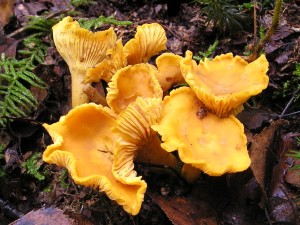 Like all fungi, including mushrooms and toadstools, the bit that you see is just the fruiting body, like an apple on a tree, while the business end, called mycelium, lies underground, a hidden network of branching tubes. They depend on plants for survival because they can’t photosynthesize sugars from the sun like green foliating plants can, yet they need sugars to live. Their presence in the forest is an extraordinary example of evolution through mutual cooperation.

Fungi, with their unique colours and textures, are fun to spot while walking through the forest and make fascinating photographic subjects.