Scotland is well known for it’s hilly landscape, it’s mountains and Munros, but none are more famous than Ben Nevis.

Ben Nevis is the highest peak in the whole of the British Isles, with it’s summit rising to a whopping 1345 metres above sea level. It is part of the Grampian Mountains in the Scottish Highlands. An estimated 150,000 people ascend it each year.

The name itself has two translations from the ancient Gaelic language, meaning ‘mountain with its head in the clouds’, thanks to its iconic mist-shrouded peak, or it can also mean ‘venomous mountain’ – you can decide which translation you prefer after the climb! 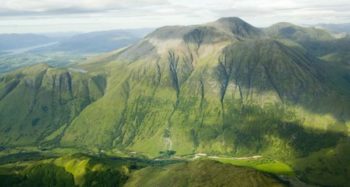 Ben Nevis stands at the western end of the Grampian Mountains in the Lochaber area of the Scottish Highlands, close to the town of Fort William.

Ben Nevis forms a massif with Càrn Mòr Dearg which sits to it’s North East, and the two are linked by the Càrn Mòr Dearg Arête. Both mountains are among the nine in Scotland over 4,000 feet.

The western and southern flanks of Ben Nevis rise 3,900 feet above the River Nevis flowing down Glen Nevis – the longest and steepest hill slope in Britain– with the result that the mountain presents an aspect of massive bulk on this side. To the north, by contrast, cliffs drop some 2,000 ft to Coire Leis.
200 metres down from this corrie is the Charles Inglis Clark Memorial Hut, which is a private mountain hut owned by the Scottish Mountaineering Club that stands 2230 ft above sea level. It is used as a base for the many climbing routes on the mountain’s north face.

As well as it’s main 4413 foot summit, Ben Nevis has 2 subsidiary ‘tops’, which are both called Càrn Dearg (meaning red hill). The higher of these stands at 4,006 ft and is to the northwest, and is often mistaken for Ben Nevis itself in views from the Fort William area. The second Càrn Dearg is on the southwestern side and stands at 3350 ft. Then further west there is a lower hill, Meall an t-Suidhe (2333 ft), which forms a saddle with Ben Nevis containing a small loch Lochan Meall an t-Suidhe.

The popular tourist path from Glen Nevis skirts the side of this hill before ascending Ben Nevis’s broad western flank. 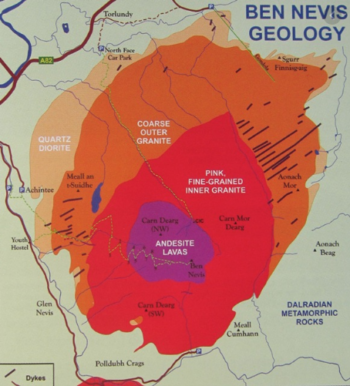 Ben Nevis in fact the remains of a Devonian volcano that met a cataclysmic end around 350 milion years ago, during the Carboniferous period. There is evidence that the huge volcano collapsed in on itself in an explosion comparable to Krakatoa! What we see as the mountain today is what remains of the imploded inner dome of the volcano. It’s form has been extensively shaped by glaciation.

The conclusions about the size of the explosion have been drawn thanks to evidence of light-coloured granite near the summit, which would have cooled in subterranean chambers several kilometres beneath the surface, and it is lying in amongst dark basaltic lavas, which form only on the surface. The two lying side by side indicates just how big an explosion there had to have been!

Research has shown igneous rock from the Devonian period (around 400 million years ago) intrudes into the surrounding metamorphic schists, and that the intrusions take the form of a series of concentric ring dikes. The innermost of these is known as the Inner Granite, and it constitutes the southern bulk of the mountain above Lochan Meall an t-Suidhe, and also the neighbouring ridge of Càrn Mòr Dearg. Meall an t-Suidhe forms part of the Outer Granite, which is redder in colour. The summit dome itself, together with the steep northern cliffs, is composed of andesite and basaltic lavas.

The summit of Ben Nevis comprises a large stony plateau of about 100 acres, which is the highest ground for over 400 miles until the Scandinavian Mountains in western Norway are reached. From up here the view is extensive. Under ideal conditions, it can extend to over 120 miles! 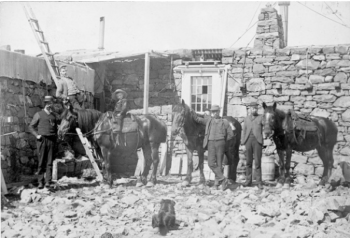 The Ben Nevis Observatory in 1945

James Robertson was the first recorded person to climb Ben Nevis, and that was back in August 1771. He was a botanist from Edinburgh that was in the area to collect botanical specimens. Another early climb was undertaken by John Williams in 1774 and he provided the first account of the mountain’s geological structure. John Keats was next to climb the mountain in 1818 and he famously compared making the ascent to ‘mounting ten St.Pauls without the convenience of a staircase’.

It was in 1847 that the Ordnance Survey confirmed that Ben Nevis is in fact the highest mountain in Britain and Ireland, ahead of it’s rival Ben Macdhui.

In the summer of 1883 the summit observatory was built, and was operated for 21 years. At the same time the first path to the summit was built, designed to allow ponies to carry up supplies. A combination of this path being built and the arrival of the West Highland Railway made the ascent up Ben Nevis very popular.

In 2000, the Ben Nevis Estate, comprising all of the south side of the mountain including the summit, was bought by the Scottish conservation charity the John Muir Trust.

In 2016, the height of Ben Nevis was officially remeasured and a new height of 1345 metres was given (a whole metre higher than the previous measurement!) 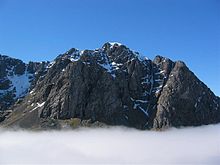 Due to it’s elevation, maritime location and topography, Ben Nevis often has cool and cloudy weather conditions. Between 1883 and 1904 observations were carried out at the summit observatory, which found that fog was present on the summit for almost 80 percent of the time between November and January, and 55 percent of the time between May and June. With average winter temperatures of around -5°C and a mean monthly temperature of -0.5°C, you will need your winter woolies on a trip here!

In an average year the summit sees around 261 gales, and receives 4,350 millimetres of rainfall, more than double the 2,050 millimetres seen in nearby Fort William. Rainfall on Ben Nevis is about twice as high in the winter season as it is in the spring and summer. Snow can be found high up on the mountain almost all year round, particularly in the gullies of the north face. The higher reaches of Observatory Gully holding snow until September most years and sometimes until the new snows of the following season.

It is reckoned that over 150,000 people walk or climb up Ben Nevis every single year, and although many of these do so either on their own or in small groups, there are also a plethora of guided tours and trips available. Despite being the highest mountain in the United Kingdom it is a very accessible mountain, although people can often be caught out near the summit when the weather changes for the worse.  Navigation skills such as using a map and compass are very important to safely descend from the summit, particularly during periods of heavy rain and bad visibility. 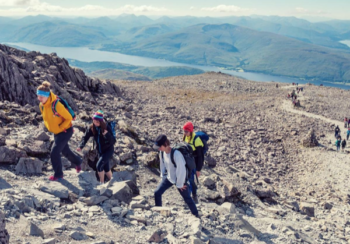 There are two main walking routes up Ben Nevis. The first is the Mountain Track (also sometimes called the Tourist Track or the Pony Track) and it is used by most walkers, whilst the other, called Carn Mor Dearg Arête route, presents a more challenging climb for more experienced hikers.

The Mountain Track, the easiest route up the mountain, begins at the Glen Nevis Visitor Centre car park, at Achintee on the east side of Glen Nevis about 2 km from the town centre of Fort William, and approximately 20 m above sea level. The track starts with a steep climb to Lochan Meall an t-Suidhe halfway up, and then the ascent features snaking zig-zag paths up to the summit.

Carn Mor Dearg Arête is the mountain’s other walking route and it is a challenging ridge climb which should only be attempted by experienced scramblers and physically-fit hill walkers. Though demanding, the route rewards walkers with the finest possible views of the mountain’s North face. It starting from the North Face car park at Torlundy, and the trail traverses not one but two Munros, the Carn Mor Dearg and Ben Nevis.

Carn Mor Dearg Arête can also be reached by following the Mountain Track to the ‘halfway lochan’, then taking the left fork whilst the right fork continues along the Mountain Track. You’ll pass the CIC Hut, a private shelter for mountaineers. A longer and more strenuous walk than the Mountain Track, this spectacular route can take between 10-11 hours with scrambles across boulders. It requires a good head for heights and careful navigation across the trickier exposed sections.

Hiring the services of an experienced and friendly Ben Nevis mountain guide is a great way to enjoy a guided walk up Ben Nevis without worry. Being in the company of someone who will know almost every foot of the way, and be able to add an extra dimension to your day out by offering tips and hints, and pointing out landmarks and interesting things on the route will make your trip extra special and also extra safe. A Ben Nevis guide will have a first-aid certificate, mountain guiding qualifications, and most important of all – experience – so you can enjoy your day without having to worry about anything.

There are multiple tour guide companies that you could choose to plan your trip with. One that we would recommend is The Highland Mountain Company. They offer services such as Ben Nevis ascents via the Pony track, CMD arête, Ledge Route and Tower Ridge. As well as low level walks like Steal Waterfalls for the less adventurous, or Glen Nevis adventure walks, climbing and abseiling for the truly daring.

There are so many other ways to experience Ben Nevis other than simply hiking. Lochaber Guides is a great company to check out if you are interested in rock climbing or scrambling. Scrambling is the exciting area between walking and climbing. It can be amongst the most enjoyable and satisfying of mountain activities and having the skills can allow you some truly adventurous days out on some of the finest routes in the country.

The north face of Ben Nevis is riven with buttresses, ridges, towers and pinnacles, and contains many classic scrambles and rock climbs. It is of major importance for British winter climbing, with many of its routes holding snow often until late April.

You can also take in the sights aboard a Nevis Range mountain gondola ride. Drift effortlessly along the north face of the Aonach Mor, and enjoy awe-inspiring views of the Great Glen and Ben Nevis, and sometimes even the Inner Hebrides on clear days. Find out more info here.

If you aren’t up to too much strenuous activity but still want to take in the glorious sites around Ben Nevis, then this 2 day Glencoe itinerary could be just the ticket for you. With the opportunity to have a lunch at the bottom of the mountain and also visit the neighbouring distillery, this is trip suited for those which to photograph the famous mountain without having to invest in hiking boots!

The Ben Nevis Race has been run in its current form since 1937, although the history of hill running on Ben Nevis dates back to 1895. Nowadays it takes place on the first Saturday in September every year, with a maximum of 500 competitors allowed to take part. It starts and finishes at the Claggan Park football ground on the outskirts of Fort William, and is 14 kilometres long with 4,400 ft of ascent.

Due to the danger involved in such a mountain environment, entry is restricted to only those who have completed three hill races, and runners must carry on them waterproofs, a hat, gloves and a whistle. Furthermore, anyone who has not reached the summit after two hours is turned back.