Home➤ News & Events➤ Blog➤ The Northern Lights (And 7 of the best places to view them!)
BECOME A LORD OR A LADY NOW

The Northern Lights (And 7 of the best places to view them!)

The phenomenal spectacle of the Northern lights is famous around the world, and a must see for everyone at least once in your lifetime. There is nothing quite like the grandeur of settling beneath the ever-changing lights to watch them streak, curl and soar across the sky in one of natures most fantastic performances.

When many people think about viewing the Northern lights, they seem to assume that the Scandinavian countries are the only place where they can be witnessed- but did you know that northern Scotland actually lies at the same latitude as Stavanger in Norway and also as Nunivak Island in Alaska, meaning that it is equally possible to spot the stunning lights from much closer to home.

In this article we have aimed to try and explain how these wondrous lights occur, as well as where you can see them, and also including some of the most stunning photography for you to enjoy too!

What are the Northern Lights?

An aurora is defined as being is a natural light display in the Earth’s sky, predominantly seen in high-latitude regions.

The word “aurora” is derived from the name of the Roman goddess of the dawn, Aurora, who travelled from east to west announcing the coming of the sun. Ancient Greek poets used the name metaphorically to refer to dawn, often mentioning its play of colours across the otherwise dark sky.

And did you know that in fact the bright dancing lights of the aurora are actually collisions between electrically charged particles from the sun that enter the earth’s atmosphere? These collisions produce an array of coloured light displays, with pale green and pale pink being the most common, but shades of red, yellow, purple, blue and green have been reported too. 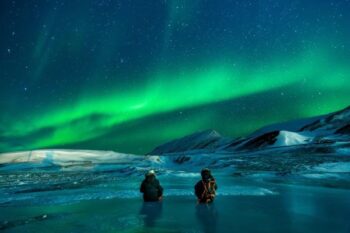 What causes the Northern Lights?

The Northern Lights may look like magic, but their existence can in fact be explained by science. They are an effect caused from the Sun, a whole 93 million miles away from plant Earth.

Energy from the sun creates something called solar wind, which is a stream of charged particles released from the upper atmosphere of the Sun. Disturbances from this solar wind in the magnetosphere result in Auroras.

As the protons and electrons from the solar wind hit the particles in the Earth’s atmosphere, they release energy. This ionisation process emits lights of varying colour and complexity, depending on the particles present, and the form the light takes is dependent on the speed and acceleration of the precipitating particles.

Different types of particles in the atmosphere make different colours after they’re shaken up – oxygen makes red and green light, and nitrogen makes blue light. Our eyes see green best out of all the colours, so we see green the brightest when we look at the northern lights.

When is the best time to see the Northern Lights?

There is never a 100% guarantee of spotting the Northern Lights. But being in the right place at the right time certainly helps.

Technically, the Northern Lights are present for much of the year, there just aren’t enough hours of darkness to see them during the summer months. It is easiest to see the northern lights in winter when is it very dark at night, and also outside of cities and away from street lights and other light pollution.

On a midsummer day, the sky could be alive with Northern Lights, but they are simply obscured by the brightness of the sun.

Generally speaking the winter season in the Arctic lasts from September early April, and during this time the Arctic sky is dark enough for the Northern Lights to be visible, so long as the conditions are right.

The Northern Lights most commonly appear between the hours of 17:00 and 02:00. They don’t usually exhibit for too long – they may only show for a few minutes, then glide away before returning. A good display may last for no longer than 15-30 minutes at a time, although if you’re really lucky, it could extend to a couple of hours or longer.

To see the Northern lights, the sky needs to be dark and clear of any clouds. Some people claim the aurora comes out when temperatures are colder. This isn’t the case – it’s just that when the skies are cloudless, temperatures tend to drop.

It’s also helpful to avoid the full moon, and a week on either side, to avoid the sky being washed out by moonlight. If you can find dark and clear skies, be on high alert from 10 p.m. through 2 a.m.

There are forecasts available to let you know when your chances of spotting the Northern Lights are at the highest. The Kp Index is generally considered the most accurate – it’s much more reliable than the weather forecast. The forecast corresponds to the planetary magnetic index on a scale of one to nine, with one being very low activity and nine very high.

The Geophysical Institute at the University of Alaska has an excellent website, which allows you to view predicted activity in all auroral regions. You can also sign up for Northern Lights forecast email alerts that tell you when activity rises above four to five on the Kp scale.

Where to see the Northern Lights?

The area in the polar regions, covering a radius of 2,500km around the magnetic poles is known as the Auroral Zone or the Auroral Oval, and this is where you are most likely to see the Aurora Borealis. For the Northern Lights in particular, the further north you travel the more likely you are to catch a glimpse of the aurora. Really you can consider anywhere  with a magnetic latitude above 55° and low light pollution as a possible location to catch a glimpse. Some of the best views of the Northern Lights can be found in: 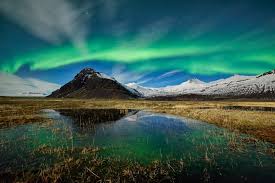 The Northern Lights in Iceland

Both the latitude and longitude of Iceland particularly favour aurora viewing, the only problem is that the weather doesn’t always cooperate. However, there are great coastline roads around the country that let you chase the clear skies. In times of high activity you can even spot the Northern lights from the suburbs of Reykjavík, but some of the very best views have been reported from Kirkjufell mountain on the west coast.

Iceland has capitalised on this natural wonder and have created an entire tourism market around the Northern Lights, from guided tours  which take you out to spot them, to rental accommodation in prime viewing locations- you can even watch the spectacular light show from a hot-tub if that’s your thing! Find out more about holidays and the Northern Lights in Iceland here. 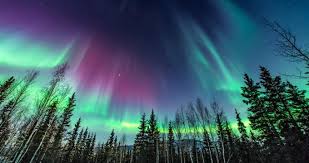 The Northern Lights in Alaska

Alaska is the best place in the whole of the US to spot the Northern Lights, specifically in the areas between 65° north and 70° north latitude. Fairbanks is generally recognised as the capital of the Northern Lights hunt in Alaska, it is just below the Artic circle so the views are not necessarily the very best, but the aurora do seem to occur most commonly here. Other places where you might get a good look are the remote northern villages of Coldfoot in the Yukon Territory, or Prudhoe Bay and Barrow in the extreme north.

Despite how cold it is in Alaska, the wonderfully clear skies mean many Americans head here for a chance to witness the Northern Lights. If you would like to find out more, check out 1st Alaska Tours, who runs nightly trips to Murphy Dome, one of the highest peaks in the Fairbanks area, which has a spectacular 360-degree view of the horizon! 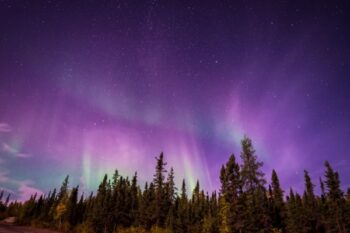 The Northern Lights in Canada

There are plenty of places across Canada from which to gaze up at the Northern Lights, mainly due to it’s low level of light pollution and northerly latitude. In fact you can click here for a list of the 12 best locations in the country, from some of which they’re generally visible 240 nights a year. Yellowknife advertises itself as the best place in the world to view the Northern Lights; thanks to it’s sparse population, clear nights and flat landscapes, you are in with a 90% chance of witnessing the spectacle. 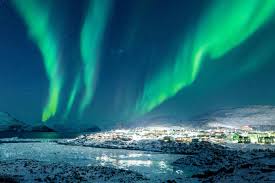 The Northern Lights in Greenland

Did you know it is possible to actually be too far North to see the Northern Lights, such is the case in parts of Greenland. But if you head to the Southerly regions to witness the most beautiful auroras. They can be seen particularly well in the area of Kangerlussuaq due to its stable micro climate, but other hotspots for the light shows are Disko Bay, East Greenland and Nuuk. 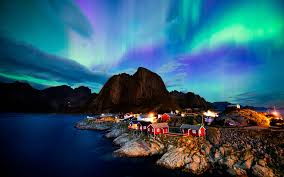 The Northern Lights in Norway

Northern Norway, with its long dark nights, multiple islands, deep fjords and steep mountains, claims to be one of the most beautiful and interesting places to see the Northern lights. The beautiful lights soar across the sky here from September to March, and the relatively mild temperatures on the Norwegian coast mean it is a popular destination for visitors. The aurora tourism industry is well developed and you can find out more about sights and tours here. 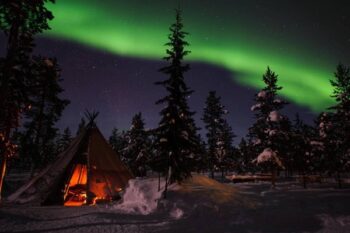 The Northern Lights in Sweden

The Aurora Borealis appear around about the beginning of September in and around Kiruna in the far north of Sweden. And then by the time winter has fully set in around January, the Northern lights can be seen throughout Swedish Lapland, which is the large expanse of land in the northwest corner of Sweden that covers nearly a quarter of the country.

The best spots in Sweden to witness the auroras include Kiruna and Jukkasjärvi, where the world’s first Ice Hotel is located, as well as the Aurora Sky Station in Abisko National Park, where a chairlift takes you up to the observation tower and you can view the station’s Northern Lights exhibition.

Find out more about the Aurora Sky Station here 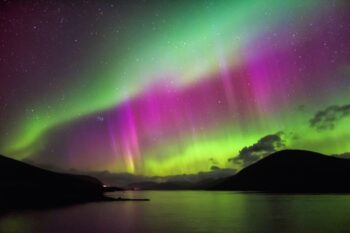 The Northern Lights in Scotland

In Scotland the stunning rays of light from the aurora borealis are known by many as ‘Mirrie Dancers’. Not everyone realises this, but the latitude of Northern Scotland is the same as as Stavanger in Norway and Nunivak Island in Alaska, so you can actually view the Northern lights without even leaving the UK. Some of the best places to try and catch a glimpse are: