Home➤ News & Events➤ Blog➤ Clan MacGregor: The History of the Tartan, Crest & Myths
BECOME A LORD OR A LADY NOW

Clan MacGregor: The History of the Tartan, Crest & Myths

The MacGregor story is one of dogged survival and endurance in appalling conditions. History calls them the Children of the Mist. For nearly two centuries Clan MacGregor was a victim of Proscription. This meant that male MacGregors could not use their surname, own property or even, in the worst times, possess a knife. They were legally hunted down and tortured or beheaded, often by Campbells. Despite such catastrophic fortune, the MacGregor name survived, and today they flourish.

Thanks to the outlaw, Rob Roy MacGregor, who captured the public imagination, MacGregors would remain ‘MacGregors despite them.’

The word clan is a derivative of the Gaelic word for children. But to be a member of a clan didn’t automatically mean you were related to the chief. Those who worked for the clan would take the surname, and those who needed protection would pledge themselves to the chief and accept the clan name as their own. But they were united equally, living and sometimes dying in service to their clan. Nowadays, under Scots law, anyone who shares the clan surname is automatically considered part of that clan. 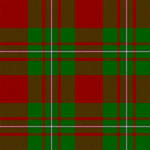 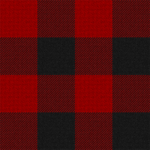 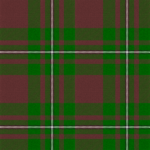 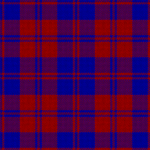 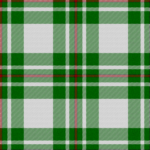 There are a large variety of tartans associated with the MacGregor, but only the five tartans depicted above are recognized as Clan MacGregor tartans by the current clan chief. The most common are the MacGregor Red and Green, dating from approximately 1810, and the MacGregor Red and Black, also known as the Rob Roy MacGregor and probably being the oldest MacGregor Tartan despite a relatively late adoption by the clan. 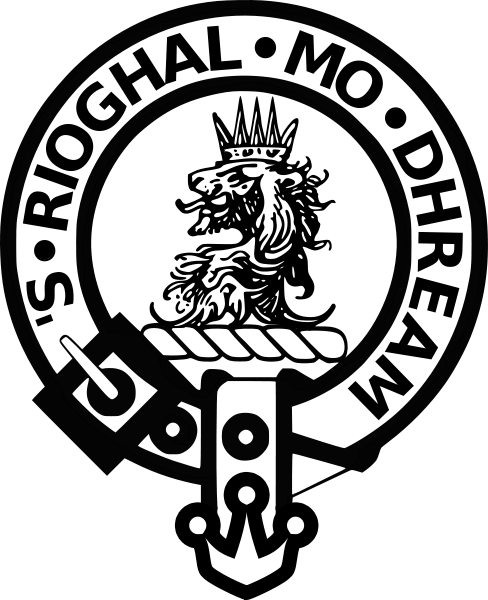 Clan Gregor, also known as MacGregor, is one of the oldest clans in Scotland. They are said to be descended from Kenneth MacAlpin, the king who united Scotland back in the 13th Century. It was the MacGregor Clan who laid claim to ruling status. The old MacGregor motto is “Royal is my race.”

But the inexorable rise of Clan Campbell is an often told tale, and it was they who by the 14th century were beginning to overtake the fortunes of the MacGregors. The MacGregors and The Campbells, not surprisingly, became enemies.

The trouble seems to have started when Robert the Bruce gave the Barony of Loch Awe (in MacGregor territory) to his loyal supporter, Neil Campbell. Despite clan territorial considerations, the king’s feudal power allowed him to take back lands and give them to whom he pleased.

The Campbells moved in and harassed the MacGregors in their neighbourhood, and forced them out of the lands around Loch Awe, back into their remaining territory. Clan MacGregor had previously controlled the areas of Glenorchy, Glenlochy and Glenstrae in Argyll and Perthshire; now they only had Glenstrae. Meanwhile, the Campbells established themselves at Loch Awe from 1308 and rose to become powerful landowners, opportunistically buying up land, and many of the poorer MacGregors became their tenants. 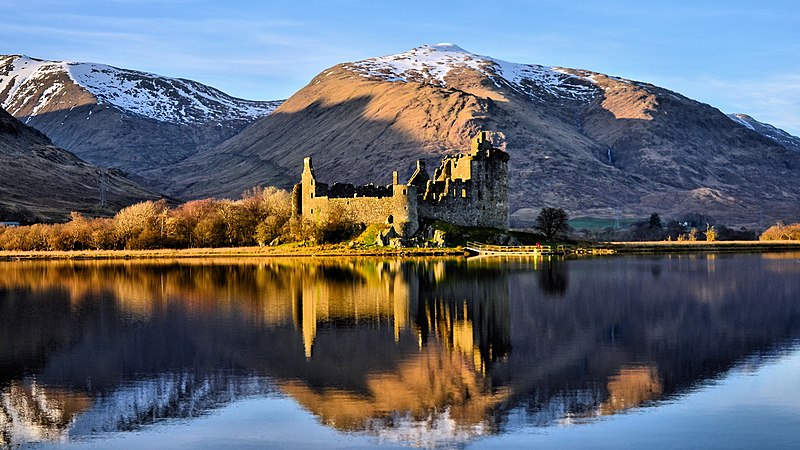 The Campbells of Glenorchy eventually purchased Glenstrae as well, then refused to have two successive MacGregor chiefs as their tenants. They tried, by fair means or foul, to wean other MacGregors away from their allegiance to their clan in favour of Clan Campbell.

In the 16th Century, a feud between a MacGregor and a Campbell erupted into a fierce war, when Grey Colin Campbell murdered the brother of Gregor Roy. The MacGregors declared war on the Campbells visiting upon the Central Highlands eight years of attacks, recriminations and blood feuds. Things had got severely out of hand.

As the Campbells were favourites of the king, the MacGregors often found themselves on the losing end of any disputes. With loss of fortunes, they had to resort to cattle rustling, which was not an uncommon practice. The king’s forester, John Drummond had caught some MacGregors poaching on the king’s land, and had them all hanged. Drummond was murdered in 1590 by way of retaliation. This was brought to the attention of King James I (VI of Scotland), but though the Macgregor chief was held responsible, the king pardoned him. 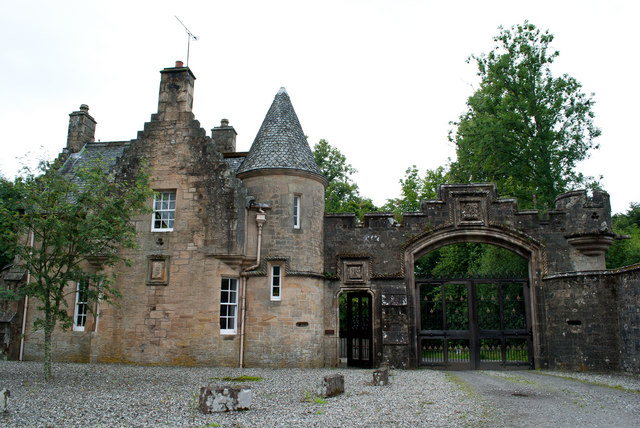 Lanrick Castle, official clan seat of the MacGregors until the 1830s. Photo by Natasa / CC BY-SA 2.0

The Banning of the MacGregor Name

If only the MacGregors had been so lenient in the affair that happened next. Back in 1592, a MacGregor arrow had accidentally killed a member of Clan Colquhoun (pronounced ‘ca-hoon’) during a cattle raid. The lands of Clan Colquhoun were particularly vulnerable to MacGregor raids. This incident had not been forgotten and in 1602, when two travelling MacGregors sought the famous Highland Hospitality from Clan Colquhoun they were refused. The two men took shelter in a remote barn and slaughtered a sheep to eat. They were found, by the Colquhouns, and executed.

When King James heard of their actions he proscribed, or banned, the MacGregor name. The Laird of MacGregor was executed along with many of his followers, and the MacGregor name was forbidden in law. This was the final victory for the Campbells and there followed years of hideous torture. To be a MacGregor now became a death sentence.

The stories say the Campbells bred fierce bloodhounds to hunt MacGregors down, which were suckled on the milk of MacGregor women to better sniff out their prey. And at the Campbell stronghold of Finlarig Castle on the banks of Loch Tay, ‘Black’ Duncan Campbell of Glenorchy had a pit, where MacGregors were beheaded for the entertainment of dinner guests. There is indeed a stone-lined pit near the north wall of the now ruined castle. 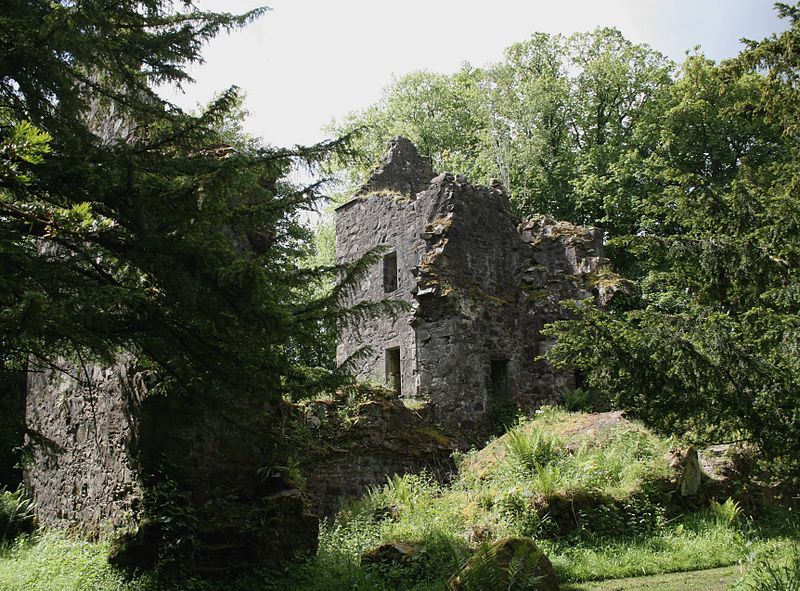 The Robin Hood of the Highlands: Rob Roy

Into this terrible legacy, a man was born in 1671 who was destined to become a legend. Robert (the Red) MacGregor, like all MacGregor males, had to assume a pseudonym to escape persecution. He took his mother’s maiden name, Campbell. As the son of a Laird, Rob Roy was well educated in reading, writing and swordsmanship. Legend says he spoke both Gaelic and English.

With his father and many highland clansmen, he fought alongside the Jacobites at the age of eighteen, in the rising that resisted the exile of James II, the dethroned Stuart King.

As a man, Rob Roy lived on land around Loch Lomond and supported his meagre living there by cattle rustling and offering protection to neighbouring farmers. As he was sometimes the one doing the rustling his protection was highly effective! He became a particular thorn in the side of the Duke of Montrose. Rob Roy’s land lay between the rival houses of Argyll (Campbell) and Montrose (Graham).

The story goes that Rob Roy was becoming a successful cattle trader. He borrowed a thousand pounds, a substantial sum, from the Duke of Montrose to finance a deal. But one of his own employees ‘mislaid’ the money. Though Rob Roy offered to pay at least some of the money back, the Duke declared him a thief and had him bankrupted. Rob escaped his imprisonment and fled into the north as an outlaw, where he mustered a loyal following.  Meanwhile, his wife and children were thrown out of their home by the Duke’s men.

It is said that Mary Helen MacGregor, Rob’s wife, was raped by the Duke’s men.  Rob Roy was given some land by Montrose’s enemy, Earl Breadlabane, and managed to return with his family to a life of protectionism and raiding – mainly aimed at the lands belonging to the Duke of Montrose. He was captured several times, but each time managed to escape. One time it was the prison guards themselves who let him go. 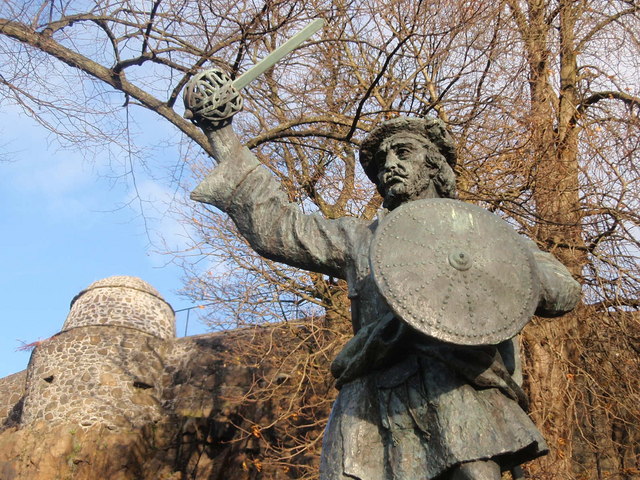 A remarkable fighter, and a charismatic individual, Rob Roy also gained a reputation as a Robin Hood figure, robbing from Montrose or else rich Campbells and giving the spoils to the poor. It was so hard to catch him that even Montrose eventually gave up. Had the MacGregors not been living under Proscription Rob Roy would have been a much higher achiever. As it was he led an uncompromising life as an outlaw.

He ended his life a free man living on his own terms, which was quite a feat for a MacGregor in those days. Some maintain that Daniel Defoe, visiting Scotland in 1723, heard about him and was inspired to write The Highland Rogue, a highly romanticised pamphlet about Rob Roy’s exploits.  Whether the pamphlet is actually by Defoe is debatable.

What is certain is that the writer, Sir Walter Scott, then took up the story in a novel entitled Rob Roy (1817). It was this novel which catapulted a much-loved folk hero into wider fame. Robert Louis Stevenson declared it one of his favourite books and it inspired the 1995 Hollywood movie of the same name starring Liam Neeson.

Despite many attempts to curtail his freedom, Rob Roy MacGregor died peacefully in his own bed. He was buried in 1735 at Balquhidder, where later his wife and two of his sons were interred. The headstone, which says ‘MacGregor Despite Them’ was actually a later addition from 1920. 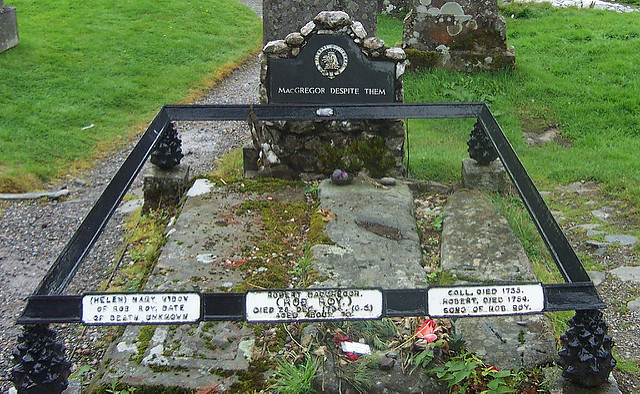 The story of Rob Roy celebrates what it means to be a MacGregor: to rage against state oppression and come up smelling of roses! In 1774, the Proscription was repealed. Today, Clan MacGregor still has a clan chief, and a strong heritage with descendants all over the world.

Because of the Proscription Gregors and MacGregors took on new surnames, with many families keeping these adopted aliases. So the MacGregor clan welcomes those with other Scottish surnames to the MacGregor family names. Is your surname a descendant of Gregor? If so, welcome to Clan MacGregor!

Born in 1971 in Crieff, Perthshire, Scotland, Ewan MacGregor is undoubtedly one of the most famous MacGregor these days. The Golden Globe winner is internationally known for his roles in critically-acclaimed films, such as Trainspotting, Star Wars, and Moulin Rouge.

In 2013, he was appointed an Officer of the Order of the British Empire for his services to drama and charity.

As of October 2018, there are over 165 plots in the Highland Titles Land Register under the MacGregor name.