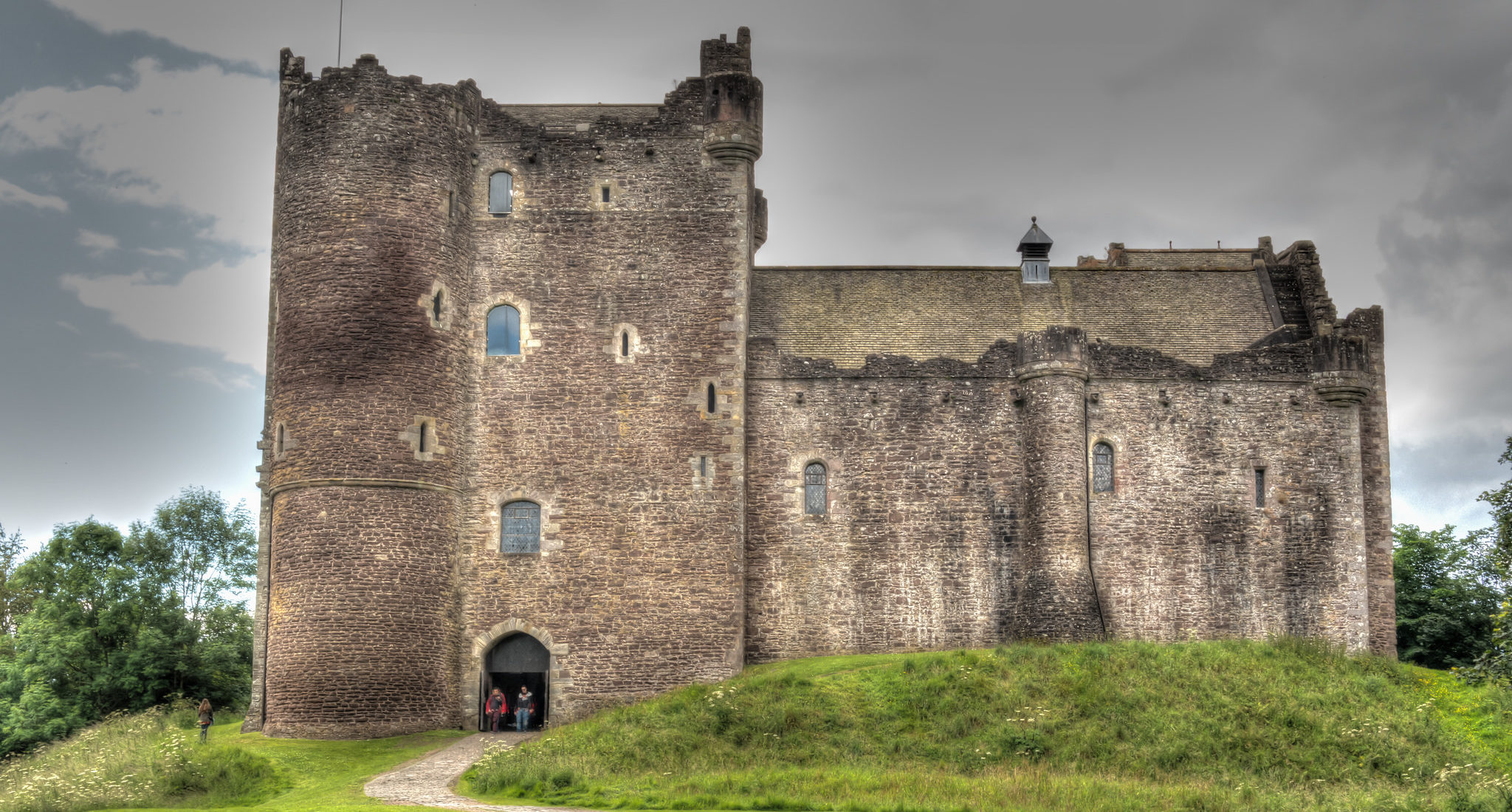 Located close to the village of Doune, near to the city of Stirling, and on the banks of the glittering River Teith, lies the 14th century Doune Castle. With its striking 100ft walls and one of the best preserved great halls of all Scotland’s castles, this imposing dwelling continues to draw visitors from all over the planet.

If there’s something about Doune Castle that feels a little familiar, that’s probably because you’ve already seen its glorious exterior and interiors in some of the world’s most popular TV shows. Scenes for Game of Thrones, Monty Python and the Holy Grail, and Outlander have all been filmed here. It’s no surprise that Doune Castle makes the perfect setting for historical fantasy, as mediaeval splendour seems to drip from every wall.

As well as taking centre stage on the silver screen, Doune Castle is also a popular modern day wedding venue. Many happy couples have tied the knot in the spectacular grand hall.

A brief history of Doune Castle

Recent research has revealed Doune Castle was probably built during the 13th century, but was subsequently damaged during the Wars of Scottish Independence. It was Robert Stewart, Earl of Menteith and son of King Robert II, who was in 1361 granted the land on which Doune Castle now stands. During his time at Doune Castle, Robert was appointed the first Duke of Albany, a peerage title that carried great power and prestige.

During Oliver Cromwell’s attempted occupation of Scotland, Doune Castle was the site of a skirmish between Cromwell’s troops and Royalists in 1654. The castle was also the site of conflict during the Jacobite Risings, and during one rising the castle was occupied by Bonnie Prince Charlie and his Jacobite Highlanders. Unsurprisingly, the condition of Doune Castle deteriorated throughout the years of fighting, and by 1800 had lost its roof. Luckily, George Stuart, 14th Earl of Moray stepped in during the 19th century and restored the roofs and interiors.

Today the castle is looked after by Historic Environment Scotland and is a Category A listed building, which is the highest level of protection for a building.

What to see at Doune Castle

Doune Castle is a magical place to explore and every room is filled with Scottish history. You can also take an audio tour narrated by Monty Python’s Terry Jones when you visit the castle, it’s a fantastic way to get insight into the making of the famous film as well as the capers that unfolded during filming.

Here are some parts of Doune Castle you must see:

Take in the awe-inspiring wonder of the splendid carved oak screen in the Lord’s Hall at Doune Castle. The hall is probably the most impressive room in Doune Castle, and has an unusual double fireplace, as well as a minstrels gallery. Keep an eye out for the ‘murder hole’ in the hall which was used for dropping heavy objects on the heads of any attackers outside.

View from the battlements

The view from the top of Doune Castle is another reason visitors flock to the castle. From the battlements, you can enjoy breathtaking scenery across the River Teith, towards the Menteith Hills and Ben Lomond.

Standing at the entrance to the courtyard it isn’t difficult to imagine the scenes which unfolded there – from the bustling everyday life of the castle and those who lived there, to the violent battles that raged between those very walls.

Plan your visit to Doune Castle

The castle is open throughout the year, with shorter opening times during the winter months. Tickets are £6 for an adult, £3.60 for a child, or £4.80 for a concession, and you can buy them in advance or when you arrive at the castle.

The easiest way to get to Doune Castle is by car, and parking is available right outside the castle. Alternatively, you can take a bus from Stirling bus station to Deanston and walk for 12 minutes to reach the castle. Within the castle, some areas may prove inaccessible to those with mobility issues. The nearby village of Doune has some quaint cafes where you can grab a refreshment before or after your visit to the castle.