The Glenfinnan Viaduct is a whopping 380m long, making it the longest concrete railway bridge in Scotland, and it crosses the River Finnan at an impressive height of 30m.

If you are a history buff, you may be familiar with this structure due to the area’s significance in the plight of the Jacobites, or if movies are your thing you might be more likely to think of it as ‘the Harry Potter bridge’. Either way, or even if you have never heard of the Glenfinnan Viaduct before, there is no denying that it is an incredible piece of architecture and that the stunning surrounding scenery is rival almost to none. Read on to find out more. 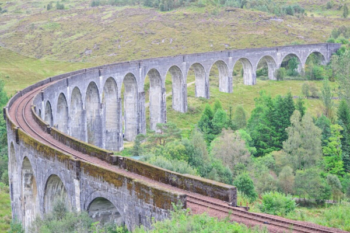 What is a Viaduct?

In case you aren’t familiar with the term, a viaduct is a type of bridge, one that particularly stands out because of it’s configuration of arches, piers, or columns which support a long elevated stretch of railway or road.

Typically a viaduct is used to allow passage over a low lying valley or river or other kind of obstruction, by connecting two points of roughly equal elevation. It is usual to see a structure built with a series of arches of roughly equal length ,the symmetry of which can often appear extremely grand.

The term viaduct is derived from the Latin via for road and ducere, to lead.

The Hamlet of Glenfinnan 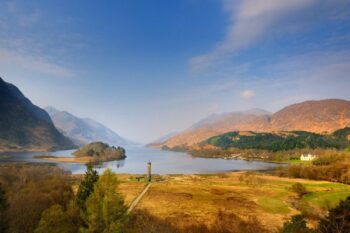 The Hamlet of Glenfinnan is located in the Lochaber area of the Highlands of Scotland. It sits at the head of Loch Shiel, which stretches south west for 20 miles to Acharacle.

Yes, most of the visitors to the area are here to make the most of the attractions in the shape of the Glenfinnan Viaduct itself, as well as the Glenfinnan Monument and the nearby Visitor Centre, but once here it is impossible to ignore the breathtaking natural scenery too.

A stroll through the ancient Caledonian pines at Glenfinnan gives you the perfect opportunity to discover a variety of wildlife, including darting dragonflies, the oldest and fastest insects in the world, as well as tiny butterflies, secretive otters and soaring golden eagles. 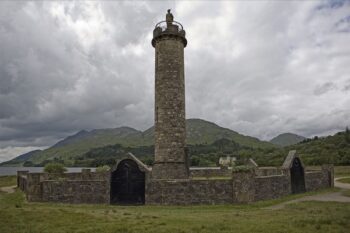 The area has a historical claim to fame because in 1745 it was here in Glenfinnan that the Jacobite rising began here when Bonnie Prince Charlie raised his standard on the shores of Loch Shiel.  This is why seventy years later in 1815, the Glenfinnan Monument was built at the head of the loch to commemorate the historic event.

By this time the Jacobite forces were no longer a threat to the government, and it was Alexander Macdonald of Glenaladale who built the 18m structure. In 1938 the statue passed into the care of the National Trust for Scotland, and it is a popular tourist attraction to this day.

Thousands of people flock to look upon the solemn looking stone Highlander, referred to at the point of commission as Charles Edward Stuart, but who now serves as a poignant reminder of all of the clansmen who gave their lives to the Jacobite cause.

Construction of the Glenfinnan Viaduct

The building of the Glenfinnan Viaduct started in 1897 and was completed in 1898, although the railway line extension from Fort William to Mallaig was not actually completed in full and opened until 1901. Until the line was fully operational the Glenfinnan Viaduct was just used to transport materials across the valley. The total cost for building this enormous bridge was £18,904.

The Glenfinnan Viaduct is built from mass concrete, which unlike reinforced concrete does not contain any metal reinforcement. It is formed by pouring concrete, typically using fine aggregate, into formwork, resulting in a material very strong in compression but weak in tension.

If you are to visit the bridge at attempt to count the arching semicircles, you will find that there is a total of 21, each spanning 15 metres.  It is the longest concrete railway bridge in Scotland at 380 m. It crosses the River Finnan at a height of 30 m, or a whopping 100 feet if you work in old money measurements! The West Highland Line it carries is made up of a single track, and the viaduct between the parapets stretches 5.5 metres wide.

The Horse Legend of the Glenfinnan Viaduct 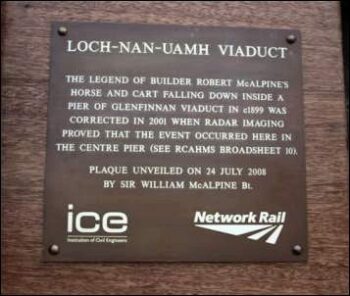 It is a long-established legend that a horse had fallen into one of the piers during construction of the Glenfinnan Viaduct in 1898 or 1899. There is in fact a plaque commemorating the incident at Glenfinnan Train Station. Supposedly the horse belonged to ‘Concrete Bob’ McAlpine of the construction company and when it horrifically fell, and it was said to dragged it’s cart down along with it.

In 1987 Professor Roland Paxton MBE, ascertained that there were only two piers large enough to be the location of this incident, and he used a fish-eye lens camera inserted through specially bored holes, only to discover that there was no evidence of a horse or cart.

Then Professor Paxton heard that local landowner Mr E.D. MacMillan had remembered from local hearsay in his father’s time that the accident had in fact occurred at the Loch nan Uamh Viaduct, which is also part of the West Highland Line.

By 2001, technology had moved on so much that state-of-the-art scanning exercise was able to be carried out at the Loch nan Uamh Viaduct. Many hours of work were involved in the process, involving transmitting radio waves through walls up to 9 feet thick, and monitoring and interpreting the results. Incredibly, it was able to be clearly seen that there was in fact the remains of a horse, standing vertically against the east wall above the wreck of a cart. This would imply that it was the loaded cart that fell first into the cavity, dragging the horse with it.

Trains over the Glenfinnan Viaduct 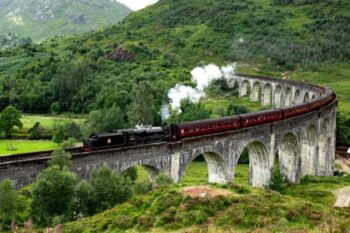 The railway line which operates over the Glenfinnan Viaduct is the West Highland Line. The West Highland Line connects Fort William and Mallaig, and was a crucial artery for the local fishing industry and the highlands economy in general, which suffered enormously after the Highland Clearances of the 1800s.

The line is used nowadays by passenger trains carrying people visiting Scotland, and is operated by ScotRail between Glasgow Queen Street and Mallaig, usually diesel multiple units. Additionally, in the summer, the heritage Jacobite steam train operates along the line. It is a popular tourist event in the area, and the viaduct is one of the major attractions of the line. Find out more about the Jacobite Steam Train here.

It is no wonder really that this journey has been described as the greatest railway journey in the world by those who have encountered it when visiting Scotland. As well as the excitement of crossing over the Glenfinnan Viaduct itself, the 84 mile round trip takes you past a list of impressive extremes, including:

The Glenfinnan Viaduct viewpoint is not defined as a particular spot, rather any spot along the path. It is typical to find at least a few tourists already waiting for the train to come by at most of the crossing times, but luckily there’s plenty of space so you shouldn’t have trouble finding a good viewing spot.

The easiest route to access Glenfinnan (apart from via the train of course!) is via the town of Fort William, and this car journey will take you around 30 minutes. There is also an infrequent bus service from Fort William to the Glenfinnan visitor centre, or there are a number of tour operators operating guided coach tours throughout the area.

You can find out more about some of these tours HERE

The Glenfinnan Viaduct train timetable changes depending on the season, so if you are hoping to catch a glimpse of the train crossing over the bridge then be sure to check the schedule before you go. Throughout the summer months of June to September there will usually be two daily services, but at other times there may only be one, so always double check on the day of your trip.

If you are trying to see the train from the viewpoint we recommend arriving at least half an hour before it is due to cross. There are a number of carparks to choose from, all of which are marked on the below map. 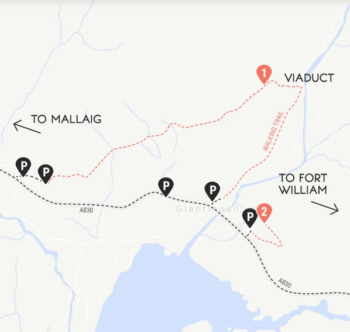 The viewpoint path up to the viewing point marked 1 on the map is a track which leads form the bottom of the valley and continues up the hill- but be warned it can get muddy so you will need appropriate footwear. Some viewers have reported that the vantage point from slightly higher up the path then most tourists congregate is better so it may be worth having a bit of an explore.

There is a second viewing point if you don’t wish to walk so far, this is marked 2 on the map. Whilst you can still get a clear view of the Glenfinnan Viaduct from there next to visitor centre, the photographs are arguably less impressive from this angle.

When the train is approaching the bridge, you should be able to spot the smoke billowing around the corner warning of it’s approach. As it crosses the valley the train will usually toot it’s horn and slow down to allow everyone looking down on the Glenfinnan Viaduct a photo opportunity.

The Glenfinnan Visitors Centre is the perfect pit stop if you are hoping the view the train crossing the Glenfinnan Viaduct or look upon the solemn statue at the Glenfinnan Monument. Not only does it contain lots of interesting historical information, it is also a fantastic place to grab a cup of tea and slice of cake!

Ask inside the visitor centre and you will be offered the opportunity to take a guided tour to the top of the Glenfinnan monument.

You can experience the modern exhibitions and displays and an audio programme about the Prince’s campaign from Glenfinnan to Derby and back to his final defeat at the Battle of Culloden. There is also a lovely little gift shop affording you the opportunity to buy a souvenir.

The visitor centre can be accessed by simply hoping off the train at Glenfinnan station, or by car following the A830 from Fort William or Mallaig, or by daily bus from Fort William too. It is located on the edge of the village, just a short walk away from the train station.

The Glenfinnan Viaduct in The Media 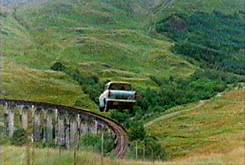 The famous flying car scene in ‘Harry Potter and the Chamber of Secrets’ which features the Glenfinnan Viaduct.

It’s no surprise really that a structure this impressive has been used in a variety of media sources. It has been used as a location in a number of film and television programmes, including:

The Hogwarts Express was in fact filmed crossing the Glenfinnan Viaduct in FOUR of the Harry Potter films.

After it was featured in Harry Potter, the Glenfinnan Viaduct became such a popular tourist spot for fans of the series that British Transport Police actually had to warn fans not to walk on the viaduct, after a handful of near misses with trains had occurred!

Another notable representation of the Glenfinnan Viaduct in the popular media, was that it was featured in the 2018 video-game Forza Horizon 4.